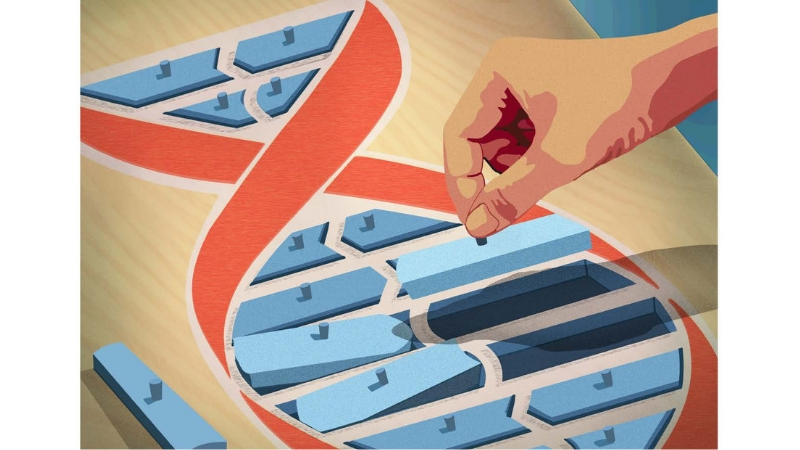 Checkpoint inhibitor drugs that stimulate the immune system have become a growing success story in the treatment of some cancers. But about half of patients whose tumors are marked by a large number of mutations from so-called mismatch repair genetic deficiency fail to respond to the drugs.

Now, researchers from the Johns Hopkins Kimmel Cancer Center, its Bloomberg~Kimmel Institute for Cancer Immunotherapy, and the Memorial Sloan Kettering Cancer Center say they have found a potential explanation for the failures.

Mismatch repair deficiency refers to a characteristic of some cancer cells that create a large number of  mutations, or changes, in certain genes when their mismatch repair proteins are unable to correct mistakes made when DNA is copied and passed on to daughter cells. Tumor cells with many such mutations create what is known as microsatellite instability and a worsening inability to correct those DNA mistakes. And, because defective genes can cause both inherited and noninherited (or sporadic) forms of cancer, they are used as biomarkers for diagnostic screening and chemotherapy treatment planning.

In a new study of such tumors in mice and humans, the investigators say they discovered that the tumors most likely to respond to immunotherapy have a higher degree or intensity of microsatellite instability (MSI) than tumors with lower MSI, meaning the former tumors possess a higher degree of DNA alterations after repeated cell divisions over time.

In particular, the researchers report, they have a higher amount of insertion/deletion, or indel, mutations of the DNA building blocks compared to other tumors. Indel mutations involve a series of nucleotides, or genetic “letters,” either inserted into the genetic code or removed during cell division. They can potentially generate neoantigens, or new proteins in cancer cells that the immune system can recognize and destroy.

A description of the new work is published in the May 3 issue of the journal Science.

One anticipated outcome of the new findings is that by taking a biopsy and sequencing the DNA of one of these tumors, clinicians could look for the degree of MSI intensity when forming a treatment plan for patients, says lead study author Rajarsi Mandal, M.D., director of the Head and Neck Cancer Immunotherapy Research Program at the Bloomberg~Kimmel Institute for Cancer Immunotherapy. Mandal is also an assistant professor of otolaryngology-head and neck surgery at the Johns Hopkins University School of Medicine.

“This genetic ‘signature’ potentially could serve as a novel biomarker, akin to a crystal ball, to see which cancer patients may respond to immunotherapy,” Mandal says. He cautions that the new results need to be validated in a larger study. “We’re not making any definitive claims at this time,” he says, “but we believe this is the first evidence that it might be possible to use such sequencing data for patients with advanced mismatch repair deficient tumors.”

A new article in @sciencemagazine explains why @bloombergkimmel researchers believe tumor mutations may indicate response to immunotherapy. Click to Tweet

Researchers from @bloombergkimmel describe how tumor mutations may drive response to immunotherapy in @sciencemagazine. Click to Tweet

At least 14 cancers types have this genetic characteristic, Mandal says. It’s most common in colorectal, stomach, uterine and endometrial cancers, but it is also seen, to a lesser degree, in other types such as lung cancer and head and neck cancer.

Those grown for four weeks were termed MSI-intermediate cell lines, whereas those grown for four months were termed MSI-high cell lines. On analysis using whole exome sequencing they found that the MSI-high cell lines had more indel mutations, and more of another type of mutation called missense (in which just one genetic letter is replaced during cell division) than the MSI-intermediate cell lines or the original parent cell lines created for the experiment.

Mice implanted with the MSI-high lines and treated with anti-PD-1 had a much more pronounced decrease in tumor volume than mice with MSI-intermediate lines and the parent lines. This suggested that the variable response the team saw was due to variations in the genetic characteristic of these tumors, says Mandal.

Then, 24 days after implantation, researchers analyzed the amount of tumor-infiltrating lymphocytes (immune system white blood cells that attack and destroy tumor cells) in the mouse tumors. They found a statistically significant and highly pronounced increase in these cells in the MSI-high tumors after anti-PD-1 therapy compared to the other samples, suggesting the response is related to the immune system.

Next, the team sequenced the DNA of the MSI-high tumors and found a reduction in missense and indel mutations in those treated with anti-PD-1. This suggested that these mutations were responsible for creating neoantigens recognized and eliminated by the immune system, Mandal says.

Building on these findings, the team looked at clinical data drawn from three independent cohorts of cancer patients to see what the relationship might be between MSI intensity and response to anti-PD-1 therapy in people. The researchers first examined baseline immune activity as measured by a previously reported and standardized immune activity score, known as CYT, measured across 14 human cancers, finding a general trend toward increased immune activity in MSI-high tumors compared to MSI-low tumors.

The researchers also say they observed a statistically significant difference—meaning the findings were not by chance—between the immune activity in MSI-high and MSI-low cancers frequently detected to have mismatch repair deficiency, such as uterine, endometrial, stomach and colorectal cancers.

In a second group of 33 patients from Memorial Sloan Kettering, the team noted that patient MSI levels in the top 80th percentile were associated with improved survival after treatment with immune checkpoint inhibitors, mostly compared to those in the bottom 20th percentile.

“Together, our data demonstrate that a range of MSI types exist, and may help identify patients who will benefit from immunotherapy,” says Mandal. “It may be possible to classify responders and nonresponders to anti-PD-1 therapy across mismatch repair deficient cancers by using precise, next-generation sequencing measures of MSI intensity.”

Mandal says the team’s next steps will explore the role of the innate immune system in the MSI-related immune response and confirm whether the baseline or the continuously generated mutations, particularly insertion-deletions mutations, are responsible for the therapeutic response observed

A previous study by the Johns Hopkins Kimmel Cancer Center and Memorial Sloan Kettering, published in Science in 2017, found that tumors with mismatch repair defects that failed other therapies might benefit from immunotherapy medications, with about half of patients with colorectal and 11 other cancers responding to the immunotherapy drug pembrolizumab. These results led the U.S. Food and Drug Administration to approve expanded use of pembrolizumab across all cancer types containing mismatch repair genetic defects.

Le is an inventor on a patent held by The Johns Hopkins University that covers use of mismatch repair deficiency for diagnosis and therapy. She also receives honoraria from Merck and research funding from Merck, Bristol-Myers Squibb and Aduro Biotech. These relationships are managed by The Johns Hopkins University in accordance with its conflict of interest policies.