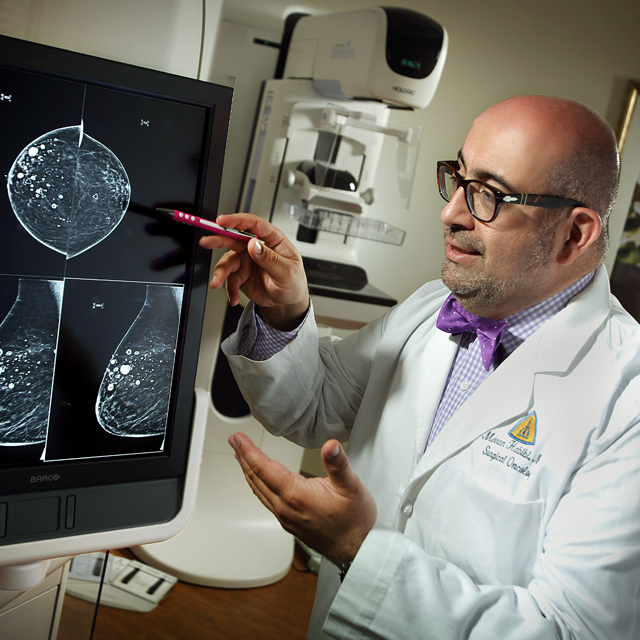 Mehran Habibi reviews digital tomosynthesis images for the size and placement of lesions in breast tissue.

When William Halsted devised the first procedure to remove breast cancer more than 100 years ago, it was a radical approach in search of a cure. He removed tissue, muscle and lymph nodes. Today, Halsted’s spirit inspires surgeons at The Johns Hopkins Hospital who continue to remove breast cancer successfully, but with vastly more conservative and advanced approaches.

Thanks to digital tomosynthesis imaging, for example, breast surgical oncologist Mehran Habibi gets highly focused three-dimensional pictures of any disease in the breasts. “It produces hundreds of images, and I can see the size and placement of the lesions more clearly,” he says.

Habibi then consults with medical and radiation oncologists to determine whether neoadjuvant chemotherapy could be beneficial. Whenever the tumor is small enough and far enough away from the nipple and areola, he can offer a nipple-sparing mastectomy to preserve the skin, nipple and areola.

The incision for the procedure goes under the breast and creates a long skin flap. In most cases, implants are used in place of the removed breast tissue, but for patients who do not want implants or have had radiation, the team can use abdominal tissue and perform microanastomosis to connect the blood vessels between the abdomen and chest tissue.

Over the last eight years, Habibi has had no instances of local cancer recurrence or nipple necrosis after a nipple-sparing mastectomy. The key to success, he says, is the thickness of the flap. “If it is too thick, the possibility of disease entering the flap goes up,” he says. “If it’s too thin, the potential for skin and nipple necrosis goes up.”

Habibi performs the procedure not only for patients with small tumors, but for patients who have an increased risk of developing cancer due to the BRCA2 gene. “We are able to reduce their risk by more than 90 percent with the surgery, and cosmetically it looks as if they had never had an operation,” he says.

Another option for patients with small tumors who are also candidates for breast reduction surgery is the oncoplastic lumpectomy. Working with a plastic surgeon, Habibi combines a lumpectomy with breast reduction. “We design the reduction to be in the same area as the lumpectomy and reduce both breasts,” he says.

“These patients have natural-looking breasts that age with them,” says breast surgeon Lisa Jacobs. “It’s a part of their body versus an artificial implant that gets replaced in 10 or 15 years. These days, any breast cancer surgery ought to be done with oncoplastic principles in mind.”

The procedure itself involves an incision around the nipple and areola, a vertical incision from the nipple to the lower area of the breast, and a horizontal incision in the fold of the breast. Habibi sees clear margins in 90 percent of cases as well as aesthetic cosmetic outcomes.