Images of the enteric nervous system in a mouse model. At left, a section of the “chicken-wire” structure of ganglia. Middle, clusters of enteric neurons. At right, the combined images depict the neuron clusters supported by ganglia. Subhash Kulkarni and colleagues feed such images into an artificial intelligence program that can identify and count enteric neurons.

Subhash Kulkarni and his Johns Hopkins colleagues are discovering relationships between the enteric nervous system and gastrointestinal and neurodegenerative disorders. The assistant professor of medicine is optimistic about the future of research in this area — research Kulkarni believes has the potential to provide new insight into a host of human diseases. He cautions, however, that the bright future depends on a better definition of the enteric nervous system’s meshlike network of ganglia, which regulates motility and other functions, and is home to an estimated hundreds of millions of neurons.

To that end, Kulkarni and his research partners have developed an artificial intelligence tool designed to identify and count enteric neurons. The software, a computer program called COUNTEN, can help researchers do the basic counting work Kulkarni says will improve the rigor and reproducibility of experiments concerning the enteric nervous system.

“We have to know how many neurons there are in the system,” Kulkarni says. “It’s no longer good enough to say ‘a lot’ or even ‘hundreds of millions.’ To assess the structure of this nervous system in a healthy state and to understand how it changes in disease requires us to come up with standardized methods of enumerating its neurons.” 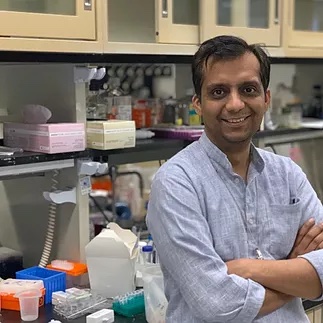 “We have to know how many neurons there are in the enteric nervous system. It’s no longer good enough to say ‘a lot’ or even ‘hundreds of millions.’”—Subhash Kulkarni

Kulkarni describes the network that makes up the enteric nervous system as structurally akin to chicken wire — a complex network of nerve cells connected by thin strands of nerve tissue that carry signals to and from the central nervous system. The clusters of neurons that make up the enteric ganglia sit at the intersections of this network like electrical substations, relaying messages and information along the network, regulating motility and other vital functions.

But the clusters are far from uniform. Each cluster can range in size from just a few neurons to scores of nerve cells. Counting neurons is complicated by the complex structure of the network, making adjacent ganglia difficult to discern. Kulkarni says that can lead to huge differences when counting.

“If we are all working with different numbers of neurons in our research, we’re less likely to get reproducible results,” he says. “If I do an experiment and it works great but no one else can reproduce it, then my experiment means nothing.”

Kulkarni’s lab and collaborators across the Johns Hopkins University Whiting School of Engineering and the Department of Neurosurgery at Stanford University used a wide-field microscope to produce images of segments of mouse intestine. They fed the images into COUNTEN and taught the computer program to identify and count enteric neurons. He says the software is much more accurate than human counters.

“We have been doing this kind of counting manually up until now,” he says. “That’s not only tedious, but also leads to discrepancies. If you and I both count them, we’re going to end up with different numbers.”

COUNTEN is a collaboration between Kulkarni and Archana Venkataraman, a John C. Malone Assistant Professor of Electrical and Computer Engineering at The Johns Hopkins University. Venkataraman directs the Neural Systems Analysis Laboratory, which develops new machine learning algorithms to characterize complex processes associated with brain dysfunction. Her research ranges from foundational neuroscientific explorations to translational applications of imaging data to exploratory directions for probing neural circuitry. Venkataraman is a core faculty member of the Malone Center for Engineering in Healthcare and the Mathematical Institute for Data Science at Johns Hopkins.

“COUNTEN is a synergistic blend of Subhash’s expertise in ENS biology and my expertise in image processing,” says Venkataraman. “Our goal was to design a simple yet robust tool to automatically parse these very large microscopy images. Some key considerations were computational efficiency and user friendliness. In fact, COUNTEN can run on virtually any machine, and the user does not need to tune a bunch of different parameters to achieve good results. Best of all, COUNTEN is fully open-source, so the ENS community can add to and improve its features.”

Another advantage of COUNTEN, Kulkarni says, is speed.

“We compared our team’s manual count against what the computer program counted,” he says. “The conclusions were very similar. And what took a team of humans three days took COUNTEN 10 minutes.”

In addition to counting the neurons themselves, says Kulkarni, COUNTEN can identify and count clusters of neurons or numbers of ganglia and the size of ganglia in the enteric nervous system, thus paving the way for reproducible and rapid assessments of tissue structure.

The burgeoning field of neurogastroenterology has made important strides in recent years. In 2017, for instance, Kulkarni, then in the laboratory of his mentor Pankaj Pasricha, debunked the long-held notion that enteric neurons last a lifetime. Pasricha and Kulkarni showed that total neurogenesis takes place in the digestive tract roughly every two weeks.

For the field to continue advancing, says Kulkarni, researchers will need to “define what health looks like. How many neurons make up a healthy enteric nervous system? If we can’t answer that, we can’t understand disease.”