In 2017, when researcher Nicholas Zachos and his colleagues published a paper in the Nature journal Scientific Reports writing that they’d established a groundbreaking way to study how our intestines protect us from infection, people took notice.

The paper detailed how Zachos, who’s director of the Integrated Physiology Core at the Hopkins Conte Digestive Disease Basic & Translational Research Core Center, and coauthors set out to learn how epithelial cells interact with immune cells to maintain homeostasis and prevent encroachment from microorganisms in the gut.

Zachos is among a team of Johns Hopkins gastroenterologists who develop and study enteroids — real intestinal epithelial cells grown in labs from stem cells isolated from patients. Enteroids can stand in for real intestinal epithelium, allowing researchers to study the basic fundamentals of the gut’s function. From intestinal stem cells, Zachos and his colleagues have cultured three-dimensional models to recreate the complete gut with vascular cells, fibroblasts, and immune cells.

“We have established the first primary human macrophage-enteroid co-culture system,” Zachos wrote in the Naturepaper’s abstract, explaining that the system would allow researchers to see — in real time, under a microscope — how the gut fights against infection.

That publication, Zachos says, has led to collaboration with researchers from organizations as diverse as the U.S. military and pharmaceutical companies using artificial intelligence working on new drugs to treat IBD. 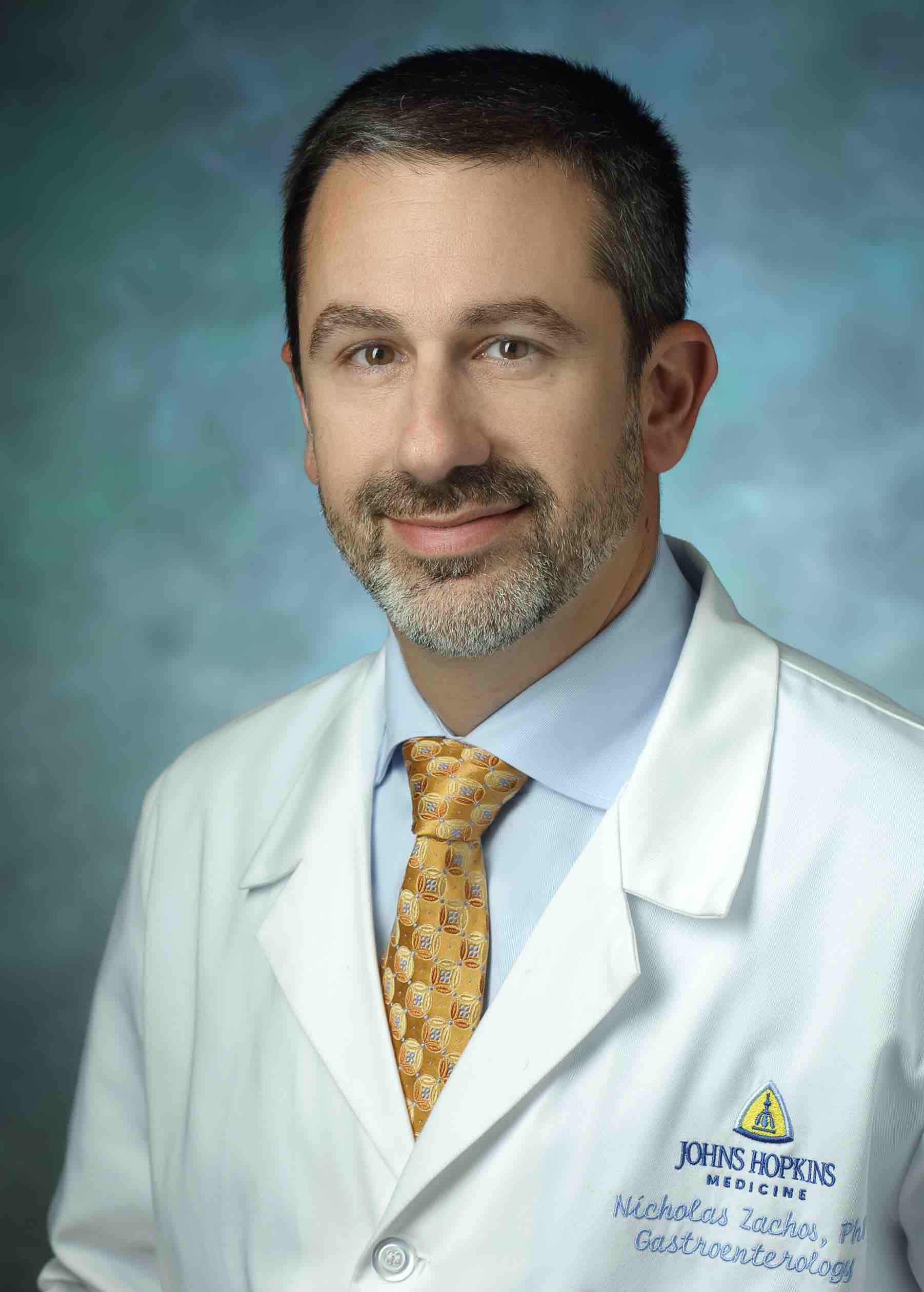 “We’re using computers to analyze the data these enteroids are generating,. Artificial intelligence allows us a much faster and more efficient approach.”—Nicholas Zachos

“We’re using computers to analyze the data these enteroids are generating,” Zachos explains. “Artificial intelligence allows us a much faster and more efficient approach than, say, using animal models, which is slow and doesn’t always match human disease to identify new disease pathways to hopefully advance the field of preclinical drug development.”

Zachos says he and his lab are also working with a branch of the United States military to study nutrition absorption in hopes of formulating nutrition plans for troops in the field.

Enteroids grown from stem cells harvested from healthy patients can show how the intestinal epithelium transports water, ions and nutrients and can offer insight into the complexities of everything from motility to cancer. When the cells come from patients who have inflammatory bowel diseases (IBD) like ulcerative colitis or Crohn’s disease, enteroids can provide clues into the nature of those conditions.

Much of the Johns Hopkins enteroid research has studied infections like cholera, E.coliand rotavirus, which cost hundreds of thousands of lives each around the world each year. Since the Naturejournal publication, says Zachos, his collaborations have centered largely on searching for new ways to treat IBDs.

“These diseases are complex and we don’t yet understand them very well,” says Zachos, noting that IBDs are on the rise in nearly every segment of the U.S. population. “Some of these popular biologic medicines we prescribe for patients are effective for a while or sometimes not at all.”

Zachos describes some of what medicine has learned from enteroids grown from samples taken from IBD patients.

“We’ve found, for instance, that enteroids from patients with ulcerative colitis have an altered phenotype,” he says. “They’re not normal epithelial cells. Even when we take them out of the context of high inflammation and put them by themselves in a dish, they just don’t function as we would expect.”