40th Anniversary of a Lifesaving Discovery 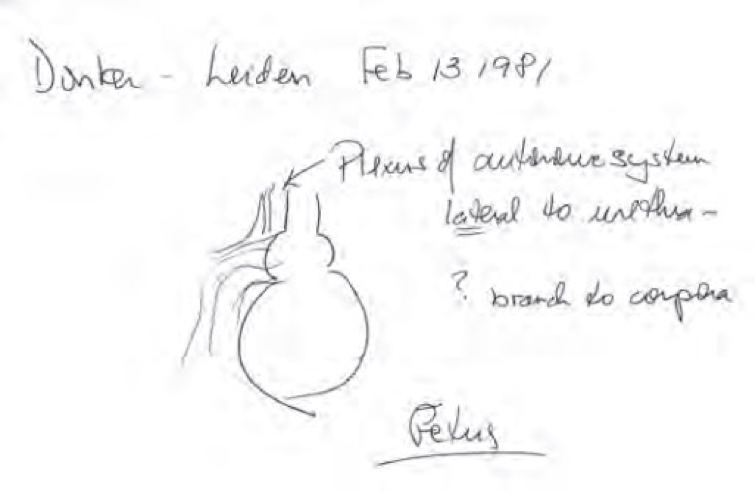 A Fortunate Discovery: Walsh’s illustration from the day he and Pieter Donker discovered the location of the branches to the corpora cavernosa.

In 1982, only 7 percent of men with prostate cancer underwent surgery. By 1992, 70 percent of men in their 50s and half of men in their 60s underwent surgery. That year, 100,000 radical prostatectomies were performed. By 2002, deaths from prostate cancer had declined by 30 percent – more than for any other cancer in men or women during the same decade.

In 1980, few men with prostate cancer were treated with curative intent.

Radiation therapy in that era was underpowered and unable to control the disease, and although surgery had the potential to cure, it was rough: life-threatening bleeding during the operation, and severe incontinence plus lifetime impotence afterward. “Most men felt that the cure was worse than the disease,” says Patrick Walsh, M.D., University Distinguished Service Professor of Urology Emeritus, “and what they feared the most was the loss of sexual function.”

All of this changed on February 13, 1981, when a major discovery was made by Walsh and Professor Pieter Donker, the retired Chair of Urology at the University of Leiden, the Netherlands. Walsh was in Leiden for five days as a Visiting Professor at the Boerhaave Surgical Symposium, operating, lecturing, and visiting laboratories. On his last day there, he went to the anatomy laboratory where Donker was working. The precise location of the nerves to the bladder had never been found because of difficulties using the adult cadaver. So Donker, with the help of a dissecting microscope, was painstakingly identifying them in a stillborn infant, where they were easier to locate. Walsh asked if Donker could show him the location of the branches to the nerves that control erections. “I’ve never looked,” Donker replied. Together, they found them three hours later – outside the prostate! Over the next year, Donker and Walsh worked long-distance to confirm the findings, and Walsh developed the technique to use the neurovascular bundle to identify them during surgery. On April 26, 1982, Walsh performed the first purposeful nerve-sparing operation. This man recovered his potency quickly, and he remains cancer-free today.

How it All Started

New podcast on prostate cancer from Boston Globe Magazine features Dr. Patrick Walsh Writer Mark Shanahan chronicled his prostate cancer journey in an article for Boston Globe Magazine, and also in a six-part podcast. In episode 3: “Hands of God,” Shanahan makes his fateful decision: He will have his prostate removed. So he hunts for the best surgeon he can find. The trail begins with Dr. Patrick Walsh, “a guru in the field of urology who revolutionized prostate cancer treatment by preserving men’s sexual function.”