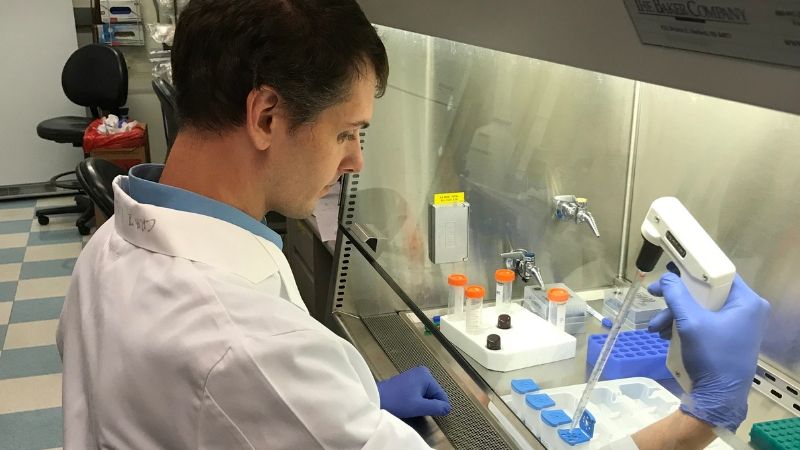 A team led by Johns Hopkins Kimmel Cancer Center investigators reports that a new laboratory test they developed to identify chemical changes to a group of cancer-related genes can accurately detect which breast tumors are cancerous or benign, and do it in far less time than gold-standard tests on biopsied breast tissue.

Although the findings are preliminary and need further validation in larger groups of people, the investigators say the test has the potential to dramatically reduce the time (minimum by one month, maximum by 15 months) generally needed to make a definitive breast cancer diagnosis in poorer countries. A quick diagnosis has already been definitively proven to boost survival for all cancers by reducing wait times to surgical and other treatments. A report on the test, which exploits the tendency of some cancer-related genes to undergo the attachment of a chemical group, by a process known as methylation, is published online in the July issue of Clinical Cancer Research.

“Diagnosis is a huge bottleneck to starting treatment, especially in developing countries that have a small number of pathologists available to review breast cancer biopsies who serve a huge population,” says study leader Saraswati Sukumar, Ph.D., professor of oncology and pathology at the Johns Hopkins Kimmel Cancer Center. “That means a test like ours could be especially useful in places with fewer resources and where mortality rates from breast cancer are much higher compared to the developed world.”

A test from @hopkinskimmel distinguishes breast cancers from benign tumors based on chemical signature. Click to Tweet

A test @hopkinskimmel could be especially useful in places with fewer resources and higher death rates from breast cancer compared to the developed world. Click to Tweet

In developing countries, women present with late-stage breast lesions due to lack of breast cancer screening/pathology programs. Even after the biopsy of palpable lumps, diagnosis is delayed since most countries in Sub-Saharan Africa average less than one pathologist per million population. Pathology and treatment services are available only at regional hospitals. This, combined with limited access to effective treatments, leads to high case-fatality rates. For the few and drastically overworked pathologists, an accurate, fast and resource-efficient test for use in screening clinics that can detect malignancies would greatly assist in prioritizing patients who need accelerated pathological and clinical evaluation, while reducing the burden on overtaxed health systems, Sukumar explains.

The reasons for higher death rates in the developing world include social stigmas that prevents many women from seeking timely treatment and a lack of health care resources. However, a major factor is time between biopsies and delivery of a diagnosis, which can be as long as 15 months in places with fewer resources compared to a few days or weeks in the United States.

With current challenges in pathology services in most low to middle income countries, the turnaround time for pathology results is several weeks and often several months in some countries. A retrospective review of turn-around time from Butaro Cancer Center in Rwanda reported that it took an average of 32 days from specimen receipt to reporting. Another study reported delays of 15 months following biopsy. A retrospective analysis from Malawi, a country in southeastern Africa, identified a median turn around time of 43 days for cancer specimens paid out-of-pocket and 101 days for nonpaid-for specimens, which rely on state funds. A study from Mexico reported delays of six to 10 months for a pathology diagnosis.

Seeking to shrink the time from biopsy to diagnosis, Sukumar and her colleagues in the Johns Hopkins Kimmel Cancer Center, Johns Hopkins University School of Medicine’s departments of pathology, surgery, and radiology, and the Johns Hopkins Bloomberg School of Public Health and collaborators from Cepheid developed a novel technology platform.  Here, a patient’s biopsy sample is loaded into cartridges and inserted in a machine that tests levels of gene methylation—a chemical addition to genes that results in changes in gene activity. This platform returns methylation marker results within five hours.

To develop the test, the researchers gathered 226 samples of breast tissue. These samples came from women in the U.S., China, and South Africa. Their ages ranged from  25 years old to 85 years old and represented all subtypes of breast cancer: estrogen receptor positive, HER2 positive, triple negative breast cancer, ductal and lobular cancers, and ductal carcinoma in situ (DCIS). Four different kinds of benign lesions and normal breast were also sampled. A genetically diverse collection helped assure that results would be widely applicable. Sampling both malignant and benign lesions allowed the researchers to distinguish methylation differences between the two groups.

Using these samples, Sukumar and collaborators Bradley Downs, Ph.D., and Mary Jo Fackler, Ph.D., evaluated the utility of 25 genes that previous studies have shown are often—although not always—methylated differently in breast cancer and benign lesions. Eventually, they narrowed their candidate genes to a panel of 10 with methylation characteristics that were more likely able to distinguish between a majority of the malignant and benign training samples.

They then ran a pilot study using 73 samples from Portugal and Hong Kong of fine needle aspirates obtained from breast lesions first deemed suspicious through mammography. The test differentiated the 49 benign lesions from the 24 cancerous ones with 96% accuracy.

These results suggest that the test holds promise as a “first pass” to distinguish between malignant and benign breast tumors, Sukumar says. With the 5-hour-long return on results, low skill required to run the test, and relatively low expense, it could offer hope of speeding diagnosis for thousands of women worldwide.

Sukumar cautions that the team’s molecular test cannot replace expert analysis by a pathologist, whose skill will be necessary to review core biopsies of the breast lesion for a definitive diagnosis and optimal therapy recommendations.

“The hope is that if further studies confirm its value, it could push women who test positive for these methylation markers to the front of the line to have their biopsies reviewed rapidly by the few pathologists in developing countries,” Sukumar says. “Instead of languishing for months while they wait for a diagnosis, patients can start potentially lifesaving treatments right away.”

Under a license agreement between Cepheid and the Johns Hopkins University, Saraswati Sukumar, Mary Jo Fackler, Antonio Wolff and Johns Hopkins University are entitled to current and future royalty distributions related to technology described in the study discussed in this publication. Sukumar and Fackler are also paid consultants to Cepheid. This arrangement has been reviewed and approved by the Johns Hopkins University in accordance with its conflict of interest policies. Authors Suzana Tulac, Kriszten J. Kocmond, Timothy de Guzman, Edwin W. Lai, Brian Rhees, and Michael Bates are full time employees of Cepheid. The other authors declare no conflict of interest.