A Beautiful Friendship, and a Remarkable Gift

“If he hadn’t been cured of his prostate cancer, he wouldn’t have been able to complete his work and have this opportunity to do good and fund the causes he most cared about." 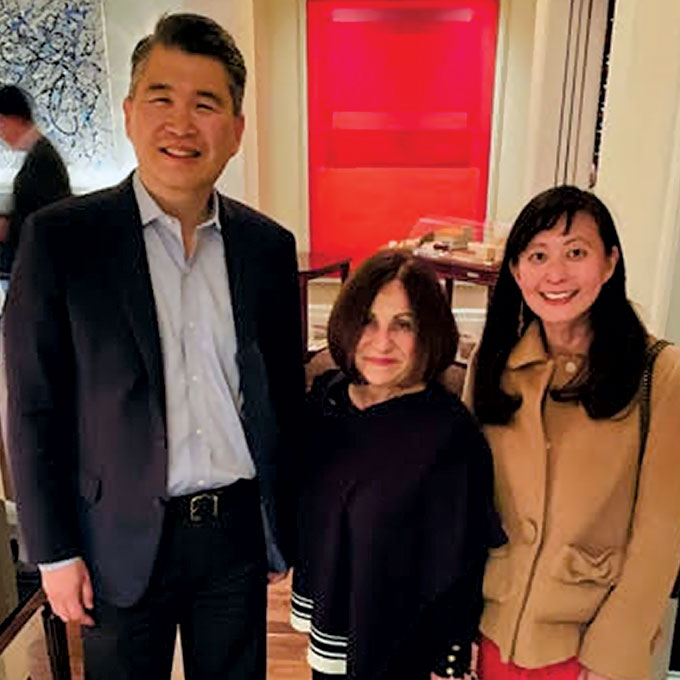 “We did this for several years,” says Toni. “Over that period, we saw Dr. Han quite often and developed a warm relationship.” They talked about their families and about Toni’s work as a Connecticut state senator. When Bud’s prostate cancer needed to be treated, Han performed a prostatectomy. “Bud was cured of prostate cancer,” says Toni. “In fact, he was so well that afterwards, he got a term life insurance policy! More importantly, not only were we working with an outstanding surgeon, but a person of great kindness, compassion, thoughtfulness and faith.” The Bouchers came to trust Han’s medical opinion so much that when other medical issues came up, “he was the go-to guy,” who would connect them with the right Hopkins specialist. “That’s just who he is.”

In late 2020, “Bud had the biggest success of his life – just as he was about to give up – with the company that he had painstakingly worked with for 20 years,” says Toni. “We had always wanted to do philanthropic work, and the first person on that list was going to be Dr. Han.” Then, on Christmas Eve, a blood test suggested that Bud might have leukemia. Toni contacted Han. “He immediately responded to my text, at 9 at night.” Han got them in touch with Hopkins oncologist Douglas Smith.

“Bud was so excited, talking about Dr. Han and Dr. Smith, and our finally being able to give a gift that would be helpful to both of them.” On January 26, 2021, late at night, Bud had difficulty breathing. Toni took him to the emergency room, and he died, very unexpectedly. “His heart just stopped,” she says. “I am grateful for the kindness and compassion that allowed my husband to feel a sense of hope and positivity right up to the very end. We had over a 55-year relationship that was a partnership in every way possible. We produced beautiful children and grandchildren – and I was a woman who didn’t want to get married and have children! I was squarely a career woman. He saved me from myself and in many ways, we saved each other. He was always thinking of the future. I’m so glad we were actually able to put it into reality. If he hadn’t been cured of his prostate cancer, he wouldn’t have been able to complete his work and have this opportunity to do good and fund the causes he most cared about. It was pivotal for us to develop a relationship with Dr. Walsh, the Brady, and Misop Han.”

The Bouchers’ generous gift to the Brady will support two research projects led by Han. One is in medical robotics. Han and Dan Stoianovici, Ph.D., are planning a clinical trial  of the transrectal-guided robotic biopsy, based on a device Stoianovici created in the Brady Robotics Lab. “We will be enrolling about 1,000 patients over the next four years,” says Han, and the Boucher funding will support a postdoctoral fellow who will be working with Stoianovici. Han believes the robot’s 3-D visualization has the potential to perform just as well as or better than an MRI fusion biopsy.

The other project concerns the education of Brady residents. Han was the Urology Residency Program Director for eight years and then worked on safety and quality improvement for the Urology faculty. He also serves as Medical Director of the Johns Hopkins Hospital Credentials Committee. Han became interested in “making a connection between the resident evaluation, once they are done with fellowship training, and their success as an independent practicing physician.” Using data collected by the Accreditation Council for Graduate Medical.

Education, Han is looking for ways to predict how young doctors will perform, “so the residency program directors can intervene before they graduate. This is a massive data project,” and the Boucher funding will support a statistician. “As an educator, I have always believed in redemption,” says Han, “helping people to get better – for both patients and for physicians.” If a physician is struggling, “we want to intervene early on.” This project would not be possible without the Bouchers’ philanthropy. “We are tremendously grateful. I cannot thank Toni enough, and I will cherish for the rest of my life the relationship I was able to build with Toni and Bud.”