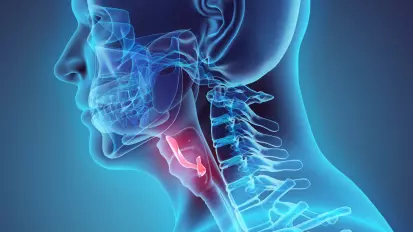 Johns Hopkins is one of few medical centers to offer the Maddern procedure, through which scar tissue from the condition can be permanently removed to restore breathing. 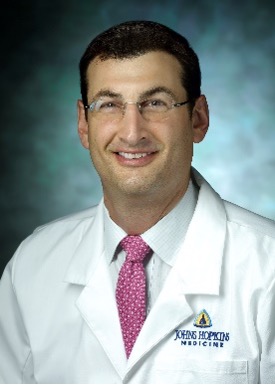 “These are otherwise healthy patients. To need these repetitive procedures simply to breathe is disruptive, painful and exhausting.”–Alexander Hillel

After a typically long route to diagnosis — a journey that takes patients an average of two years — some opt to treat this chronic condition with an open surgery that removes the troublesome portion of trachea while leaving behind a prominent external scar. But the majority choose an endoscopic procedure that, while causing no visible scarring, must be repeated every few months or years for the remainder of the patient’s life whenever subglottic scar tissue regrows.

“These are otherwise healthy patients,” Hillel says. “To need these repetitive procedures simply to breathe is disruptive, painful and exhausting.”

Several years ago, Guri Sandhu, a consultant otolaryngologist–head and neck surgeon at Imperial College London, developed a new way to permanently treat iSGS. Named the Maddern procedure after Sandhu’s first patient to receive it, this innovative technique removes scar tissue endoscopically and reconstitutes the mucosal lining to prevent scar tissue from growing back.

In 2015, Hillel traveled to London to learn the operation, making Johns Hopkins one of just a handful of academic medical centers to provide it in the U.S.

In the Maddern procedure, Hillel explains, the surgeon first uses a laser to determine the depth of scar tissue within the trachea, then an endoscopic shaver to remove the tissue. Next, they suture an ultrathin skin graft harvested from the patient’s leg to a stent, which is placed onto the surface of the open wound in the trachea and held in place with sutures. Over the next few weeks, the graft heals onto the surgical site, preventing scar tissue from re-forming.

Patients typically go back for two or three follow-up surgeries, Hillel says — one procedure two weeks after the initial surgery to remove the stent, and the others weeks to months later to resurface the graft site, which can collect respiratory secretions since it’s not lined with cilia like the native tracheal surface. However, beyond these follow-up operations, patients rarely need further surgeries to address their iSGS.

Hillel notes that the patients he’s treated with this approach check in periodically, telling him they can now exercise, participate fully in their family lives, and give talks at work without being out of breath or needing to plan around their next procedure.

“We often take our breathing for granted, and when that’s hindered by an obstruction, it has a huge negative impact on patients’ lives,” Hillel says. “It’s so gratifying to be able to provide them a minimally invasive permanent solution and to help them return to living their life.”