A Domino Chain of Discovery 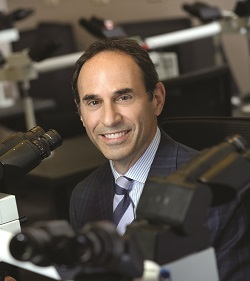 Four decades ago, Patrick Walsh started an ongoing series of discoveries that transformed the field of prostate cancer research and treatment.

It started with a single discovery: More than 40 years ago, radical prostatectomy (an operation invented in 1904 at the Brady by Hugh Hampton Young) was a dreaded operation, notorious for excessive bleeding and the grim side effects of incontinence and impotence. Patrick Walsh, M.D., University Distinguished Service Professor Emeritus, wanted to make it safer, and he did, with the discovery and development of surgical techniques to stop the terrible bleeding. Improved visibility, in turn, led to new intraoperative improvements that dramatically reduced the risk of incontinence.

And then came Walsh’s great discovery, in 1980, with Dutch urologist Pieter Donker, of the cavernous nerves, which control penile erections. Until then, their location – just outside the prostate – was unknown, and surgeons routinely sliced through them as they removed the prostate. Over the next 14 months, Walsh developed a surgical technique to identify and preserve these microscopic nerves and on April 26, 1982, Robert Hastings became the first patient to undergo a purposeful nerve-sparing radical retropubic prostatectomy. Recently, Hastings died at age 88, cancer-free, having lived a normal life.

Over the next decade, radical prostatectomy became the most common form of treatment for localized prostate cancer in younger men, and with the timely development of PSA testing to identify men with curable disease, deaths from prostate cancer rapidly declined.

From a research standpoint, this dramatic increase in surgery resulted in an immediate benefit: for the first time, there was an abundance of prostate tissue for study.

“In the fields of breast and colon cancer, tissue was always available for pathologic, biochemical and molecular analysis,” Walsh explains. “However, because surgery for prostate cancer was rarely performed, only tiny amounts of tissue obtained from needle biopsies were available for many years.” By 1990, radical prostatectomy had become one of the most common inpatient surgical procedures performed at Johns Hopkins Hospital, and the tissue it provided helped to transform the field. Here are just a few examples:

Partin Tables. In 1990, when PSA testing became routine, little was known about how to interpret the findings. “We were fortunate to have Daniel Chan, director of clinical chemistry,” says Walsh. “He had the foresight to save serum samples from the prior five years, which enabled us to define how PSA could best be used for diagnosis and prediction of outcome.

From these studies, we learned that PSA levels could not be used for prediction without understanding the aggressiveness of the tumor. With the expertise of Jonathan Epstein, M.D., the Reinhard Professor of Urologic Pathology, we learned that the most aggressive cancers did not make much PSA. This revolutionary observation led to the Partin Tables, which helped patients understand their likelihood of being cured by surgery.”

Criteria for very low-risk prostate cancer. As more patients were being diagnosed with prostate cancer, scientists learned more about the spectrum of this disease. It became clear that many patients had tumors that were so small and slow-growing, they did not need immediate treatment. To identify which patients could be managed with active surveillance, Jonathan Epstein reviewed surgical specimens removed from patients who had small tumors. In 1993, he published the criteria that are still used for the prediction of very low-risk prostate cancer.

PSA elevation following surgery. It also became clear that after surgery, about 20 percent of men developed an elevated PSA, indicating that their cancer had recurred. “Based on the pathology of the surgical specimen, the time to PSA recurrence, and the speed at which PSA was rising (doubling time), we were able to develop recommendations for who did or did not require immediate treatment,” says Walsh.

Basic science discoveries. In the laboratory, legendary Brady scientist Donald Coffey, Ph.D., and colleagues used the tissue harvested at surgery for biochemical and molecular studies that shed light on how prostate cancer develops and what makes it aggressive. This insight into the biology of prostate cancer has played a major role in developing new approaches for treatment.

The world-class bio-database that made these studies possible began on day one 40 years ago, and today it contains specimens from 26,000 patients. This information (using patient codes and no names) is available to all Hopkins investigators who request it without charge or expectation for inclusion in authorship of manuscripts.

“Someday,” says Walsh, “when surgery may no longer be necessary for the treatment of prostate cancer, historians may recognize that the tissue harvested from surgery in the past was instrumental in making the advances in treatment and prevention possible.”

This database has also made possible the pioneering genetic studies into Hereditary Prostate Cancer, which Walsh and William Isaacs first identified in the 1980s.

Teaching the Surgical Technique to the World

In 2003, Patrick Walsh produced a well-illustrated, one hour and forty-five- minute video that provided a detailed description of his surgical technique. Through the generosity of the Mr. and Mrs. Robert C. Baker Family Foundation, 50,000 complementary copies of the DVD were distributed to all urologists in the world who requested one. Today, urologists in China, Africa, India, and elsewhere attribute their ability to provide high-quality surgery to what this video taught them. The video remains widely available on the internet.