A Kidney for Chloe 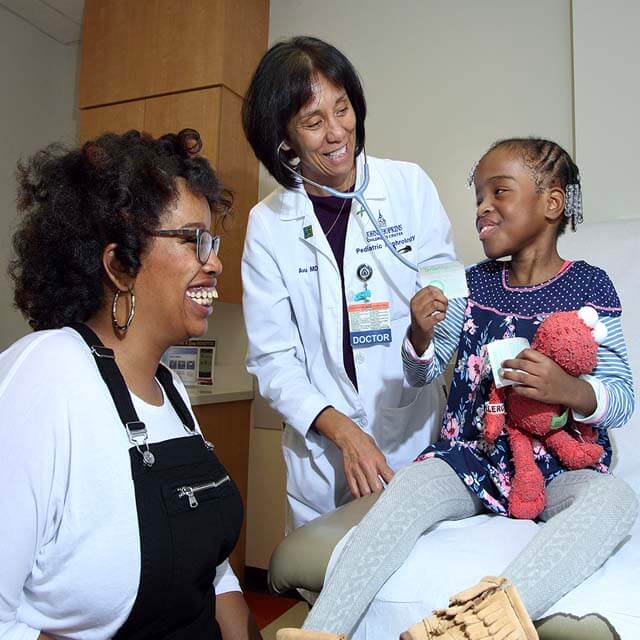 During Jarilyn Walker’s 16-week ultrasound procedure, her obstetrician in Atlanta said everything looked fine and she would be having a girl. However, her 29_week screening detected a congenital defect—a diaphragmatic hernia. This triggered additional fetal imaging that revealed cysts on one kidney. Tests also pointed to a possible genetic syndrome and the potential need for admission to the neonatal intensive care unit (NICU) upon the baby’s delivery. Indeed, notes Walker, her daughter Chloe was placed on ECMO (extracorporeal membrane oxygenation) to support her heart and lungs immediately following her birth the day after Christmas. Three days would pass before Walker could hold her newborn, and the first few months of Chloe’s life were spent in the NICU.

“This was my first child—I had no idea of what we were getting into,” says Walker. “Chloe spent three months and three weeks in the NICU, where they tried to stabilize her.”

Life over the next three years, marked by seizures and near-constant battles with creatinine levels signaling failing kidney function, was a struggle for Chloe. While not unhappy with her care in Atlanta, Chloe’s mom felt her complex condition required a higher level of specialized renal care. Having grown up in Maryland, she knew about the reputation of Johns Hopkins Children’s Center and decided it was time to explore treatment there.

“We were not being seen regularly by a nephrology team in Atlanta, and I was familiar with Hopkins,” says Walker. “This was what was best for Chloe—it just worked.”

At Johns Hopkins, Chloe was evaluated and cared for by a holistic multidisciplinary team, including pediatric nephrologists and urologists, intensivists, infectious disease specialists, renal nurse practitioners, behavioral psychologists, child life specialists and social workers. Throughout her care, communication between team members was ongoing, but they also meet regularly to assess pre-transplant patients like Chloe, share updates each other on their progress, troubleshoot problems and plan next steps: their surgery, post-operative and follow-up care.

In addition, because the Children’s Center is connected to The Johns Hopkins Hospital, Chloe benefited from access to resources such as an immunogenetics laboratory that optimizes donor selection, and on-site renal pathologists who review some 800 kidney biopsies each year.

“If we have to do a kidney biopsy on one of our transplant patients, we can physically look at it with an internationally recognized kidney pathologist that day, whereas other centers may have to send specimens out,” says Alicia Neu, director of the Division of Pediatric Nephrology.

Before Chloe could receive a kidney transplant, however, she would have to undergo dialysis to stabilize her medical status. Chloe was unable to receive peritoneal dialysis at home due to congenital urologic complications, but Walker learned that Johns Hopkins had just opened an ambulatory hemodialysis center, the only such unit in the state dedicated to children. That meant families would not have to travel to Washington, D.C., or Delaware three days each week for outpatient dialysis, keeping them close to their medical team and improving their continuity of care.

“Patients and families now have the best dialysis modality for them in their own backyard instead of having to go out of state,” says Neu. “Also, they get to stay with the multidisciplinary health care team here that has cared for them, often from the time when they were infants, and who will now follow them through dialysis and transplant.”

During months of dialysis and visits to the pediatric nephrology clinic, Walker says she and her daughter built “an intimate relationship” with Neu and her team. Senior Child Life specialist Nilu Rahman, their “go-to person,” joined Chloe at all of her appointments, Walker says. Meanwhile, a dedicated behavioral psychologist periodically monitored Chloe’s medications and their effects on her mood. And when Chloe suffered a seizure in the middle of the night, Walker found Neu in the emergency department first thing that morning.

“I felt like I was BFF (best friends forever) with the team and in the best place where we could all communicate with each other,” says Walker. “The doctors and nurses were like family. They made her such a priority.”

After eight months on hemodialysis, the time for Chloe’s kidney transplant had arrived. Because of the excellent outcomes of Johns Hopkins’ living related donor program, in January 2018 Walker chose that option over using a deceased donor. The surgery, however, would not be a simple one. Chloe brought complex urologic disease with her. The transplant team had an answer for that, too—pediatric urologist Heather Di Carlo.

“Not every center has a close relationship between a pediatric urologist and the transplant surgeon, which is important because the single leading cause of kidney disease in children is structural urologic disease,” explains Neu.

The opportunity to treat a range of genitourinary anomalies, and to train with internationally renowned pediatric urologist John Gearhart, brought Di Carlo to Johns Hopkins Children’s Center as a pediatric urologic fellow in 2012. Since then, her focus has been on innovative reconstruction of complex urologic complications, such as Chloe’s, that come into play for patients preparing for kidney transplant.

“If they have posterior urethral valve, a blockage in the urethra or urethral stricture disease, we get these patients ready for transplant by reconstructing their urinary lower tract,” Di Carlo explains. “Sometimes kids will need their bladder to be bigger, in which case we’ll use intestine as augmentation, or for patients who need to be catheterized, we’ll create a stoma in their belly button for catheterization. Our goal is to get these patients optimized for transplant, and part of that is providing a safe urinary tract and pelvic floor to place the kidney.”

That was the job of transplant surgeon Niraj Desai, who was challenged by operating on an abdomen that had prior surgery—a vesicostomy to prevent a urinary tract infection and damage to the kidney. In addition, Chloe’s abnormal vascular anatomy required some innovative techniques by Desai to connect the donor kidney artery to the abnormal artery in her abdomen. Rather than use her underdeveloped iliac artery, he used her larger epigastric artery as the inflow vessel to the kidney.

“That was very unusual—something I’ve never done before,” says Desai. “Sometimes we’re faced with unusual arterial or venous anatomy and we have to be a little more creative to figure out what to connect to.”

“The artery is large enough, she has ample blood supply and her kidney function is excellent,” says Desai.

Di Carlo and her team followed up with the ureteral reimplantation, creating a new tunnel into Chloe’s bladder to connect the transplant ureter. If the reimplantation is successful, the patient will be at less risk of reflux backflow of urine from the kidney to the bladder, which can threaten the longevity of the donor organ.

“We measured everything out to make it fit perfectly and sewed the ureter into her bladder in a way that doesn’t allow urine to go up into her kidney, and at the same time we decreased the risk of it being blocked,” says Di Carlo. “It’s a non-refluxing implant. Everything went very well, she did well post operatively, and right now she’s thriving.”

However, Chloe’s journey is not over, the team stresses. She will need additional surgery, including bladder augmentation using a patch of her native intestine. The result will be a bigger bladder with less pressure and urgency. In addition, Chloe’s longitudinal medical care by the team will continue—kidney transplant care does not begin and end with the procedure, notes Neu.

“Transplant is not a cure. People who get a kidney transplant are at risk for infections and malignancies, and solid organs do not last forever. They will need life-long immunosuppression,” says Neu. “Luckily we were able to get a kidney for her. She really has blossomed and is now a normal 5-year-old and all over the place.”

Two weeks before Chloe started school for the first time, her mom said she agreed: “She’s been doing so good—I see a whole new her. She is amazing, so smart, so strong. It’s surprising how a new organ can really alter your personality.”