A Serendipitous Collaboration in Care 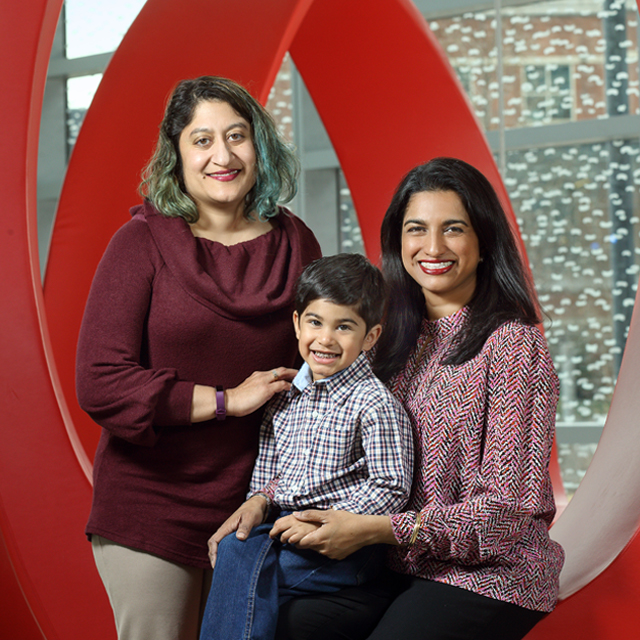 Call it serendipity that brought Johns Hopkins physicians Shameema Sikder and Priya Sekar together a few years ago at a leadership forum for junior faculty. They not only became friends, but last year, they worked together to save Sik­der’s son.

Sikder’s then 3-year-old son, Yusef, had what seemed like a routine cold with a high fever; at one point, his eyes looked red. Yusef seemed to get better, but the following week he developed a rash and his hands and feet started peeling.

At that point Sikder, director of the Center of Excellence for Ophthalmic Surgical Education and Training (Oph­SET) at the Wilmer Eye Institute at Johns Hopkins, reached back out to her pediatrician. “I told her it’s probably nothing, but I did remember seeing a rare case of Kawasaki syndrome when I was a resident at Johns Hopkins 10 years ago. One of the hallmarks is high fevers, and you also can have red eyes, which is why I was consulted on that case.”

The disease, in which blood vessels throughout the body can become in­flamed, can affect the coronary arteries supplying the heart, causing irreversible damage. She also called Sekar, a pediat­ric cardiologist, for advice. The pediatri­cian referred them to a local cardiologist for an echocardiogram (an idea sup­ported by Sekar), which revealed Yusef had four aneurysms, one of them giant, around his heart.

Sikder again called Sekar, who recom­mended bringing Yusef to Johns Hop­kins Children’s Center immediately. Late on a Friday afternoon before a long weekend, Sekar pulled together her on-call team to form a plan and consulted cardiology treatment guidelines, as Yusef was outside the standard window for treatment within 10 days of fever.

“I was quite worried when I met them,” Sekar says. “Having Kawasaki syndrome and coronary artery aneu­rysms puts you in a very small percentage of children with the condition and poses greater challenges in treatment.” In these patients, Sekar noted, lesions may persist and require ongoing management and, in some cases, cardiac interventions after the acute illness has resolved.

Sekar admitted Yusef to the hospital and recommended treatment with intra­venous immunoglobulin, a mixture of antibodies used to fight infection. Five days later, he went home.

“I can confidently say that treatment basically changed the course of Yusef’s disease for the better,” says Sikder, “be­cause over the coming months, his an­eurysms continued to improve.” Yusef now has just one aneurysm, significantly smaller in size. He is back to playing with his twin sister, toy cars and planes, but still needs periodic monitoring for his heart.

As a Johns Hopkins faculty member, Sikder well understands the power of phi­lanthropy. So, in appreciation for Yusef’s care, Sikder and her husband made a gift to support Sekar’s faculty development and help promote her research.

“We are just so grateful to Johns Hop­kins, to the Children’s Center, to the en­tire team that took care of Yusef when he was in the hospital, and particularly to Dr. Sekar, who went above and beyond and really altered our family’s history by allowing Yusef to now have a healthy life,” Sikder says.

“I feel like it’s a win-win,” adds Sekar. “I feel so grateful to be acknowledged by Shameema, but it’s also a privilege to be able to help a friend and colleague when I could.”