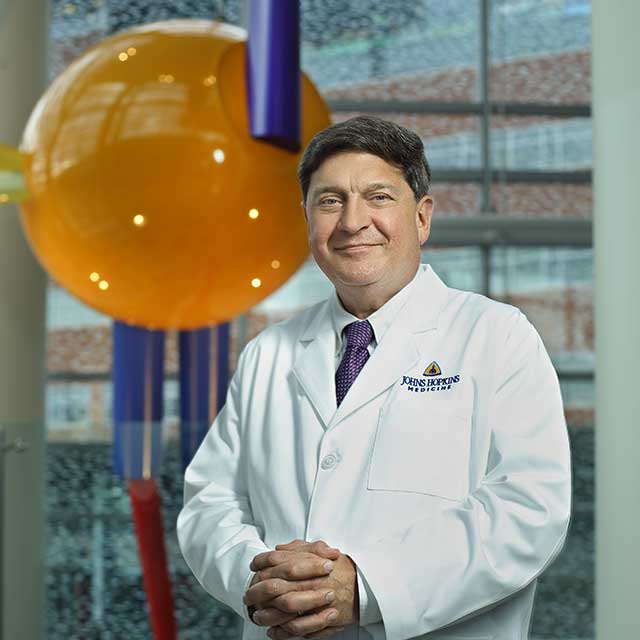 The patient, an 8-year-old boy from Western Michigan, experienced progressive back and hip pain, constipation and urinary hesitancy for over six weeks. His father took him to the local emergency department, where a staff physician ordered an X-ray that, unfortunately, did not reveal the source of the boy’s pain.

The doctor said he should be fine in a week or two but he got worse — it got to the point where he couldn’t walk and could only sleep with his knees on the bed,” says his father, Kesong Hu, tearfully. “Jake is an awesome son, highly empathetic and he always tries to consider others first. When he hurts he doesn’t tell you.”

That prompted a visit to another physician, who gave the child an examination and a massage but no answers. The father then contacted colleagues at the university where he works as a neuropsychologist. They recommended a work-up at another hospital six hours away, where imaging uncovered the culprit: a tumor embedded deep in the spinal canal, beneath the dura at the thoracolumbar junction. Jake needed to see a neurosurgeon and quickly, one with extensive experience in resecting such evasive spinal tumors. His father knew right away where to look.

Having grown up in College Park, Maryland, and as a former neuropsychology student at Johns Hopkins, he was well aware of The Johns Hopkins Hospital’s reputation. A website search steered him to pediatric neurosurgeon Alan Cohen, who quickly initiated a telemedicine consult with the father and the referring hospital staff. With medical records and imaging electronically in hand — and seeing the large schwannoma tumor occupying and compressing the spinal cord and nerve roots — Cohen agreed time was of the essence.

“The tumor was filling the whole spinal canal with no room to go anywhere else,” says Cohen. “If it got any bigger, he could have lost all motor function as well as control of his bowel and bladder.”

Three days later, Jake was in the operating room designed for pediatric neurosurgical patients at Johns Hopkins Children’s Center. Because schwannoma tumors arise from the lining of the nerve cells, Cohen knew dissecting a tumor wrapped around the nerve roots and spinal cord would be “tricky.” Intraoperative neurophysiologic monitoring was needed, along with microsurgical tools to separate the highly adherent nerves and spinal cord from the tumor. How did it go? The delicate five-hour procedure, says Cohen, was successful.

“The tumor is indeed benign and now it’s gone,” says Cohen. “In the recovery room, Jake was moving his legs perfectly.”

“The team was very highly efficient, very professional, and provided emotional support,” he says. “I feel like they gave a second life to my son.”