Acute Flaccid Myelitis: The Next Outbreak? 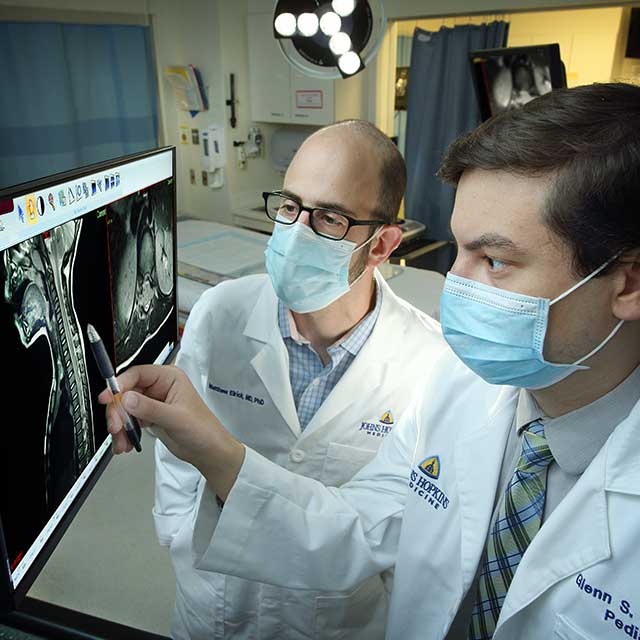 Glenn Rivera, at right, reviewing patients’ spinal scans with his mentor, neurologist Matthew Elrick, who has a special interest in acute flaccid myelitis.

The loosening up of COVID-19 restrictions may raise the risk of a spike in AFM infections in 2021.

A presentation on acute flaccid myelitis (AFM) at Johns Hopkins Pediatric Grand Rounds in early May was more than an update — it was also an alert. Outbreaks of the polio-like illness thought to be due to a viral infection and affecting primarily children have occurred in a biennial pattern since 2012, when the Centers for Disease Control and Prevention (CDC) began tracking the disease. Since then, there have been more than 600 cases in the United States, yet only 31 cases reported to the CDC in 2020. Why?

“Mask-wearing and physical distancing restrictions related to COVID-19 may have reduced the transmission of the virus linked to AFM and prevented an outbreak from taking place,” said Glenn Rivera, who has been conducting research on AFM as a resident in pediatric neurology.

Consequently, because Enterovirus D68 did not circulate widely in 2020 and offer the usual delayed herd immunity that kicks in the following year, there are even more children than usual who have no immunity against it this year, Rivera explained. That, he added, raises the potential for a significant outbreak this year — especially if COVID-19 restrictions are relaxed.

“While the biennial outbreaks have emerged during even years, there is the chance of an outbreak in 2021 once COVID-19 restrictions are lifted,” Rivera said. “Then, it’s theorized, we could see a spike in cases perhaps larger than ever.”

Time, and the rising population susceptibility to enterovirus D68, says Rivera, will tell. In fact, 10 days after Rivera’s May 3 presentation, the CDC announced that fully vaccinated people can resume activities without wearing a mask or physically distancing, except where required by federal, state or local rules and regulations. That means, Rivera stressed, that parents and front-line providers in the community and in hospital emergency departments need to be on the alert for the signs and symptoms of AFM.

Referring to the most recent published review by the AFM working group regarding patterns of clinical presentations of AFM, Rivera noted that a preceding viral syndrome — often respiratory — is almost universal among affected patients. In a minority of cases, the onset of weakness is preceded by fever alone, gastroenteritis or hand, foot and mouth disease. The subsequent development of neurologic symptoms, including asymmetric limb paralysis due to damaged motor neurons, occurs one to 10 days afterward. The neurologic symptoms tend to progress over hours to days.

“The parent may tell you a history of several days of weakness and viral-like symptoms,” says Rivera. “Or the kid was getting better and now the child has not been using his arm, is having difficulty walking or appears lethargic — all signs pointing to the possibility of AFM.”

Pediatricians, Rivera notes, can perform a quick screen for weakness by asking a child to raise his or her arms and legs to assess anti-gravity function in all four limbs. He adds that it’s important to listen to patients speak and to ask targeted history questions about swallowing difficulties, which may be evidence of brainstem dysfunction. When a child is smiling or crying is a good opportunity to look for facial weakness.

“Kids will not tell you they’re weak — they just stop moving,” stresses Rivera.

Confounding detection, 80% of patients ultimately diagnosed with AFM are initially misdiagnosed by providers, studies show, and a significant number are sent home after being seen by their first provider. Missed diagnoses are tied to higher rates of intensive care admissions with increased need for ventilatory support, as well as delayed treatment by one to two days.

“How can we as general pediatricians decrease the rate of misdiagnosis and find that needle in the haystack?” says Rivera. “The susceptible population is likely higher than ever, so it’s essential that we remain vigilant.”

Rivera has been conducting AFM-related research with pediatric neurologist Matthew Elrick and neurosurgeon Allan Belzberg. One area of interest is outcomes of patients with AFM who underwent nerve transplant surgery for persistent neuro deficits.