After 45 Years at the Brady, John Isaacs Retires 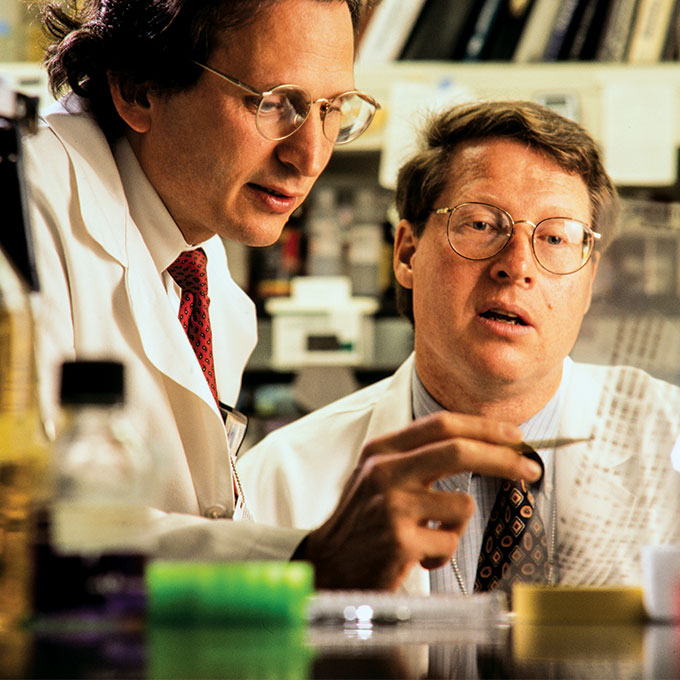 The Isaacs Brothers: William, left, and John, in the early 1990s.

For anyone who has been around the Brady a while, the photo above should make you smile. It’s two members of the distinguished Isaacs family: scientist William Isaacs, at left, and his brother, scientist John Isaacs, at right. Not pictured is John’s late wife, Sally, a talented genetic epidemiologist who served as the coordinator of the Johns Hopkins Hereditary Prostate Cancer Study for more than 20 years.

In 2022, after a 45-year career at Hopkins, John T. Isaacs, Ph.D., Professor of Oncology and Urology, retired. John is a pioneer in the translation of basic science theory into clinical trials for lethal prostate cancer. Decades ago, he began doing science that no one else was attempting: finding ways to exploit the body’s process of apoptosis (basically, cellular suicide) as a means of killing metastatic prostate cancer.

John came to Johns Hopkins Hospital at a very early age: he was born here when his father was a Johns Hopkins medical student. After earning his undergraduate degree from Hopkins and his Ph.D. in biochemistry from Emory University, he returned in 1977 as a postdoctoral fellow with the Brady’s longtime director of research, Donald S. Coffey, Ph.D. In 1980, he joined the faculty in the Department of Oncology with a secondary appointment in Urology, beginning a long and illustrious career focused on the molecular biology of prostate cancer and its application to the development of designer drugs for treatment.

In pioneering studies with Coffey, he showed that resistance to androgen deprivation occurs because of clonal selection: that androgen-resistant cells continue to grow, unfazed by hormonal therapy, and eventually overtake the hormone-sensitive cells. In subsequent studies, he and colleagues defined the mechanism by which androgen deprivation kills cells through apoptosis, and then provided evidence for a metastasis suppressor gene.

John’s work on experimental therapeutics was based on specific targeting of metastatic prostate cancer cells with delivery of toxins through molecular engineering. More recently, his work was based on the use of cyclic supraphysiologic testosterone (STP) to treat metastatic castration-resistant prostate cancer. The author of more than 300 papers, John served as Editor-in-Chief of the journal, The Prostate, for 20 years. He was Co-Director of the Division of Experimental Therapeutics at the Johns Hopkins Sidney Kimmel Comprehensive Cancer Center, and Professor of Oncology, Urology, Cellular and Molecular Medicine, and Chemical and Biomolecular Engineering, at the Whiting School of Engineering. John always ends his emails with one word: “Peace.” This is what the Brady wishes him as he starts his next chapter.