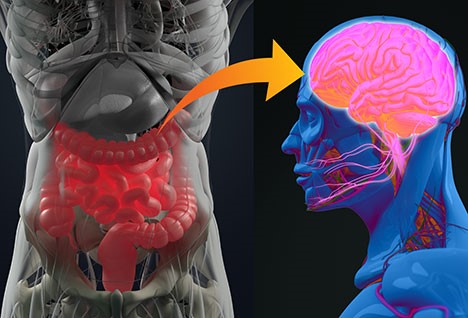 The 17-year-old has winnowed her diet down to noodles and Nutella, but she still feels nauseated after a few bites. She weighs about 90 pounds, leans on a cane to walk and speaks in a near-whisper.

Her muscles and joints hurt all the time, and she complains of perpetual headaches. She’s also depressed and has a history of self-harm, though she says she no longer cuts herself.

The girl, a high school senior, had been to one specialist after another since her symptoms emerged in fourth grade. Now, she and her mother are at the Amos Food, Body and Mind Center on the Johns Hopkins Bayview Medical Center campus, seeking a more holistic approach to a seemingly disconnected roster of debilitating symptoms.

The Amos Center was founded and is co-directed by gastroenterologist Pankaj “Jay” Pasricha, who is also director of the Center for Neurogastroenterology, and psychiatrist Glenn Treisman, who also directs the AIDS Psychiatry Service and Pain Treatment Center.

Their collaboration began in 2012, when both gave presentations at a Johns Hopkins gastrointestinal conference and realized they shared an interest in the gut-brain interaction.

Two years later, they launched the Amos Center with a gift from Courtney and Paul Amos. Physician assistant Megan McKnight manages the clinic, and Janita Gittens is clinical coordinator. It may be the only clinic in the United States that brings together gastrointestinal and psychiatric experts, who work together to treat patients in both physical and psychological distress, says Pasricha.

“People have talked about the gut-brain connection for a long time, but usually in the context of people who are depressed or anxious and, as a result, have physical symptoms,” says Treisman. “But that’s not the whole story. We are emphasizing that this is bidirectional. Signals emanating in the gut can influence how the mind feels.”

The center’s clinic, which meets two half-days a month, attracts patients from all over the country seeking a solution to their complex and connected psychiatric and physical ailments, says Treisman.

It is providing hope for patients like the high school senior, who meets with Treisman, Pasricha and other clinicians, including psychiatrist  Traci Speed, who studies the relationship between sleep and health; clinical psychologist Neda Gould, who helps patients gain control over their symptoms through mindful meditation and other techniques; and motility fellows Josh Sloan and Amit Kashyap, who are learning the Amos Center’s holistic approach to complex syndromes.

The clinicians ask questions, look over test results and discuss the girl’s medical history. Toward the end of the hour-long session, Treisman and Pasricha prescribe a depression treatment that also works as an appetite stimulant and quells nausea, and a migraine medication because migraines and abdominal pain often occur together.

“You’re a complicated patient with a lot of things, and all your symptoms are making the others worse,” Treisman says. “Getting it straightened out will take a lot of doctors working together.”

He tells her not to worry.

“We’ve had patients every bit as sick as you,” Treisman says. “And they get better.”

From Clinic to Lab and Back Again

For example, Pasricha has identified a cluster of symptoms that appear to be linked to underlying autoimmune disease. He calls the syndrome JAG-A, an acronym for the symptoms of joint hypermobility, autonomic dysfunction and gastrointestinal dysmotility. He is treating those patients with intravenous immunoglobulin to strengthen their immune systems.