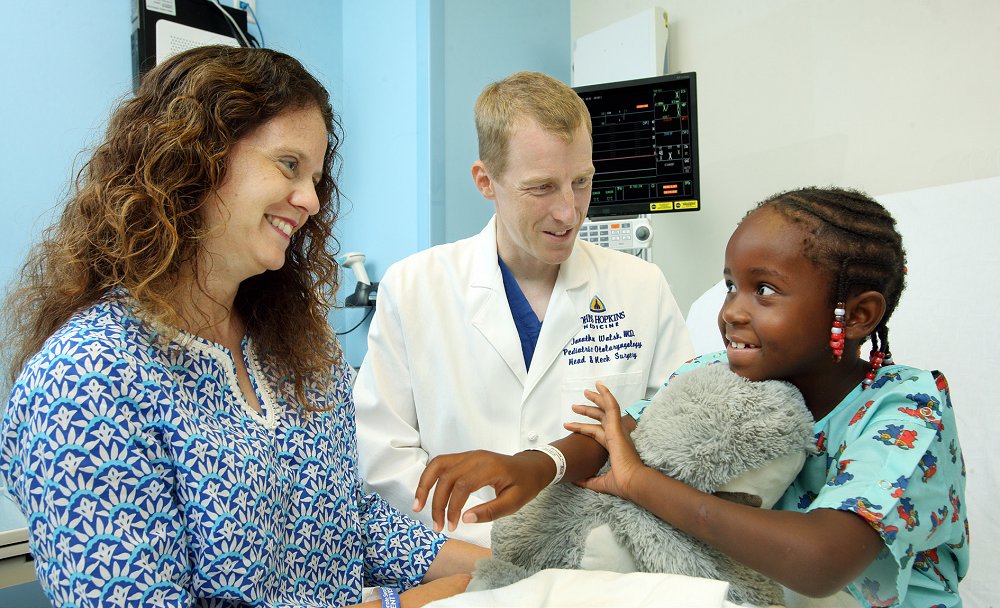 In clinic following her surgery, Miriam and her mom, Jen Sheriff, with pediatric otolaryngologist Jonathan Walsh.

Flying back from South Africa with Miriam, her newly adopted daughter, Jen Sheriff noticed discharge in the 4-year-old’s ears. Back home in Rising Sun, Maryland, Miriam’s condition persisted, prompting a visit to a local pediatrician and then Johns Hopkins pediatric otolaryngologist Jonathan Walsh. He found that Miriam had apparently been suffering chronic ear infections for years, the result of tympanic membrane perforations in both ears. In a year or two when she was stronger, they would have to be repaired, but how?

Traditionally, explains Walsh, otolaryngologists would make an incision behind the ear, pull the flap forward to access and visualize with a microscope the tympanic membrane, and then patch any holes with temporalis muscle tissue. This procedure, called tympanoplasty, was, he says, “a pretty standard approach with good results.”

However, Walsh adds, following the surgery patients complained that they felt pain when chewing food, the result of temporalis tissue being removed for grafting. To avoid that outcome, Walsh and pediatric otolaryngologist David Tunkel today employ a less invasive approach to tympanoplasty using endoscopes with high-definition cameras. With that enhanced visualization, they access the tympanic membrane directly through the external ear canal, avoiding the need for an incision behind the ear. Rather than resect temporalis tissue for a graft, they implant an artificial graft to patch the perforation without any cuts or stitches, resulting in little or no pain and a faster recovery time.

“The nice thing about this approach is that it allows us to do repairs without incisions or harvesting graft of the patient’s own tissue,” says Walsh. “The benefit here is better visualization, which allows us to do a better job and the patient to go home the same day as the surgery and to have a quicker recovery. Typically, most people heal really well.”

“The big advantage is no incisions or sutures, so there is less ear swelling and pain,” adds Tunkel.

How did Miriam’s surgery go?

“The surgery itself went fine, and she came through the recovery very well,” says Jen Sheriff, who adds that Miriam is scheduled for a second surgery to repair a small perforation in her other ear.