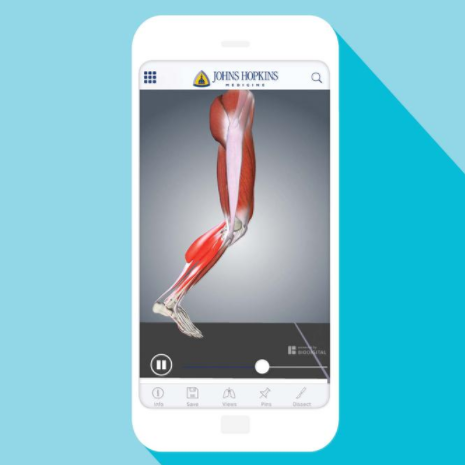 “It’s flexible, dynamic—and accurate, which are all important aspects for the market it’s aimed at,” says Ruff, science consultant to Muscle Anatomy: A Johns Hopkins Medicine 3D App. “For someone who wants to understand how, say, a thumb works, that’s critical.”

Users can spin, tilt, dissect, write on and highlight different areas of the body. They can also tap on anatomical labels to reveal educational information or use the ‘X-ray option’ to see a more transparent version that reveals three-dimensional positioning. Animated 3D models show the movements of muscles and bones in activities like raising an arm.

“For instance, when someone walks, the muscles that become active at different parts of the gait cycle will light up in the model,” explains Ruff.

It took nearly two years to bring the app to market. A Johns Hopkins medical and biological Illustration graduate who now works at BioDigital contacted Ruff for feedback on musculoskeletal renditions; the idea for the app came shortly after. The anatomical renditions were pulled from BioDigital’s image stock and meticulously reviewed and enhanced based on feedback by Ruff.

“Getting everything to look exactly right and correctly positioned was the biggest challenge,” says Ruff.

Learn more about this and other innovative technology at the Johns Hopkins Mobile Apps page.