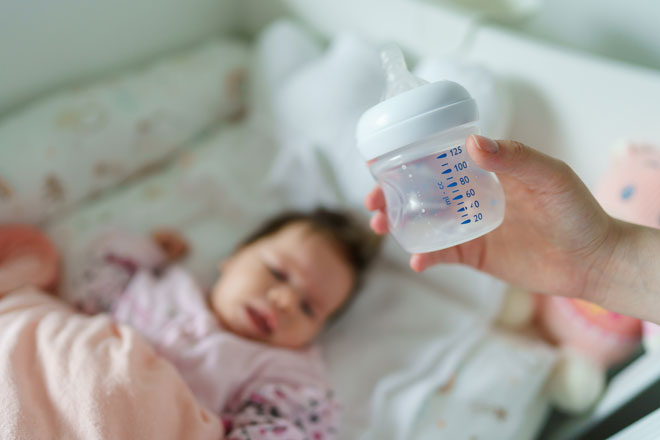 By tapping into the power of data and taking a team-driven approach, leaders at Johns Hopkins Children’s Center have provided critical intervention to keep fragile patients safe.

Pediatric gastroenterologist Steven Miller and his Johns Hopkins colleagues woke up to alarming news on Feb. 17. Abbott Nutrition had just announced that it was recalling three of its most widely used infant formulas and shutting down its Michigan plant — the largest infant formula manufacturing facility in the United States. Four babies using Abbott formulas had been hospitalized with a rare bacterial infection and two had died.

“Johns Hopkins has a contract with Abbott, so most of our kids were on these formulas,” Miller says. Though no Johns Hopkins patients had reported bacterial infections, the health system would have to scramble both to help parents switch their children to other products and to shore up the system’s supplies.

The most immediate challenge was finding feeding alternatives for the most fragile patients. These were children on feeding tubes who had been stabilized at home on an elemental or amino acid based formula in which the proteins are broken down into their simplest form (individual amino acids). This makes it digestible for infants and even some older children who, because of extreme food allergies, shortened digestive tracts or serious illness, can’t tolerate other foods or formulas.

There are risks involved in switching these children to other formulas, says Miller, “and our worry was that they could become unstable and have to be hospitalized.”

Johns Hopkins Children’s Center went into immediate planning mode, says Tiffani Hays, director of pediatric clinical nutrition education and practice for the entire Johns Hopkins Health System. Children could be hydrated and fed intravenously in the hospital if necessary, but “we were working on bed management because the Children’s Center has been running at 90% capacity,” she says.

Miller says he was determined to avert a large number of young patients “crashing into the hospital.” To do that, he and his colleagues would need to figure out just which and how many children in home care were using the formula, and when their supplies would run out.

His plan was to assemble a team to track down and proactively manage each of those fragile patients, and he has a unique set of skills that made it possible. Not only is Miller a pediatric gastroenterologist whose specialties include difficult-to-feed children, he is deeply steeped in health informatics — the management of data to improve patient care. He had already worked with Johns Hopkins information technology staff on other challenges, including streamlining insurance approval for a medicine that is critically important for inflammatory bowel disease.

“You’d think you could just do a computer search to figure out which patients were impacted, but it isn’t that simple,” he says. “The information isn’t entered into the electronic medical record in a way that’s easily searchable. Luckily, I know a couple of people in IT who are great at querying the database.”

And to obtain lists of patients using the formula, Miller contacted the various home care companies (including Johns Hopkins Medicine’s Pediatrics at Home, part of the Johns Hopkins Home Care Group) that manage those prescriptions for discharged patients.

Combining information from the Johns Hopkins medical record and the home care companies, Miller assembled an Excel spreadsheet listing the doctors, their patients, the formulas the patients were on and when the formulas would run out. He says the question then was, “Are we going to just send this information to the doctors and let them handle it individually?”

Instead, Miller — who is a passionate proponent of team-based medicine — worked with Hays to collect data about alternative products the home care companies had in stock. Miller then sent that data to his physician colleagues in the Johns Hopkins pediatric gastroenterology department and asked them what formulas they wanted to switch their patients to, and whether some patients could even be safely weaned from the elemental formula entirely.

Once the doctors indicated their recommendations on the spreadsheet, Hays pulled two of her senior nutritionists off clinical duty and had them spend a couple of days calling the families, explaining the situation and the doctors’ recommendations, supporting them in deciding what to do and coaching them how to make the transition, including how to mix the new formulas. “We wanted them to know we are there for them,” Hays says.

How the families decided to proceed was then entered on the spreadsheet and sent directly to the doctors’ offices with detailed instructions about what to order. Nurses wrote up the orders and sent them to the doctors to sign, then faxed them to the home care companies.

“So, we built that whole work queue and successfully transitioned nearly 100 patients in a very short period of time,” Miller says. But because elemental formulas are difficult to manufacture, it has been a challenge for other companies to completely make up for the Abbott closure, and the team continues to monitor supplies. In late March, about three weeks after that first successful transition, home care companies started to run out of one of the substitute elemental formulas. “So, we’ve had to do two additional rounds of the process, and we are prepared to repeat it as many times as necessary,” Miller says.

The good news? So far, all of the patients have switched to new formulas successfully. Not one patient has needed to be hospitalized, and only one ended up, briefly, in the emergency department before being stabilized and sent home, Hays says.

To Miller, it’s been a deeply satisfying demonstration of the beauty of data-driven and team-driven medicine. “Basically, it’s a story of using health IT to figure out which patients need a critical intervention,” he says, “then creating a plan for that intervention, and then organizing a medical team — IT, doctors, nurses, nutritionists, home health care providers, supply chain staff — to orchestrate that intervention to keep our patients safe.”