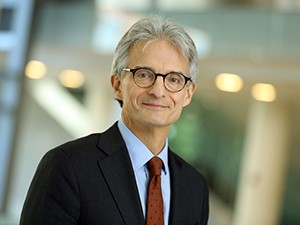 “Since I returned to Hopkins in May, I have found everything that I expected: great people, a palpable and genuine commitment to quality, and that familiar clarity and coherence regarding how to think about the conditions we treat.”
— Robert P. Roca, vice chair for clinical business development for the Department of Psychiatry and Behavioral Sciences.

By the time he left to become medical director of geriatric psychiatry services at Sheppard Pratt Health System in 1993, Roca was a faculty member in the department of psychiatry and directing the psychiatric consultation program for medical, surgical and geriatric patients.

Recently retired from Sheppard Pratt, the 67-year-old physician is once again treating psychiatric patients in Hopkins’ geriatric and community practices, this time on the East Baltimore campus, while he helps find ways for Johns Hopkins Medicine to expand its clinical psychiatric services. One initiative, a new residential treatment center for mood and anxiety disorders, is in the early stages of planning.

“This department was part of my past, and I’m very happy and honored to be part of its future,” he says.

Jimmy Potash, director of the Department of Psychiatry and Behavioral Sciences, calls Roca a national leader in the field. “People have a lot to learn from Bob — on the one hand as a geriatric psychiatrist, and on the other as a clinical and health services leader.”

Roca brings a wealth of administrative experience to his new title of vice chair for clinical business development for the department. As Sheppard Pratt’s vice president and chief medical officer from 2000-2019, he helped expand the psychiatry program to include services in several Maryland hospitals and developed a program of consultation in nursing homes. Other duties included overseeing services in the system, which has 340 inpatient beds for psychiatric patients, special education programs, outpatient and rehabilitation programs, and more than 200 clinicians. Along the way, he also earned an MBA from the Johns Hopkins Carey Business School.

Last year, when he decided to begin a new career chapter, he sought out Potash, whom he first met in 1991 when the department director was a medical student.

“I knew I wanted to do something different, but I loved psychiatry, loved seeing patients, loved thinking about how to do that better,” he says. “And I loved this department.”

Potash is enthusiastic about employing the “steady and wise” attending he had admired during his psychiatry clerkship.

“I had been contemplating aspects of clinical expansion that involve complex considerations that neither I, nor anyone in our department, had a whole lot of experience with,” he says. “Given that Bob oversaw the growth and expansion of a very large and complicated clinical system at Sheppard Pratt, he has exactly the right kind of experience and skills to spearhead some of these new efforts.

A Deep Commitment to the Field of Geriatric Psychiatry

Roca is also working with Susan Lehmann, director of the Geriatric Psychiatry Day Hospital Program. She met him when she was a resident at Hopkins, and they have served together on various professional committees. She describes him as “tremendously committed” to geriatric psychiatry, a field that launched in the late 1970s when only about 5% of the U.S. population was over the age of 65. That number is projected to grow to roughly 20% of the population by 2030.

Roca serves as chair of the American Psychiatric Association’s Council on Geriatric Psychiatry and as chair of the Group for the Advancement of Psychiatry’s committee on aging, opportunities he says have taught him much about how his colleagues practice and think about psychiatry.

At this point in his career, Roca says he possesses a deepened understanding of problems faced by patients in their later years.

“The challenges of getting older are no longer so abstract,” he says. “When you think as you never have before about your own limits, you empathize with people who are running up against those issues for the first time. I also think people find it easier to believe that you will understand what they’re saying.

“Over time, and with experience, you become more appreciative of how complex problems really are, and how many facets there are to situations. You become less quick to jump to diagnoses and formulations, and more appreciative of the fact that it takes time to know somebody well enough to know how best to treat them.”

Since coming to Hopkins in May, he has published a viewpoint article for Psychiatric Services, a journal of the American Psychiatric Association, on the importance of ensuring that assessments of the quality and value of mental health care services take into account whether the values and preferences of patients were considered and respected. He proposes a model that measures quality in terms of the achievement of patient-specific goals of care arrived at collaboratively by the patient and clinician.

“There’s a lot of talk about the value of health care and a lot written about transitioning from volume to value as the basis for reimbursement,” he says. “Value is generally described from the point of view of the payer, and the individual patient has little to say about it. We should strive for a system in which high-value care is care that our patients value highly.”