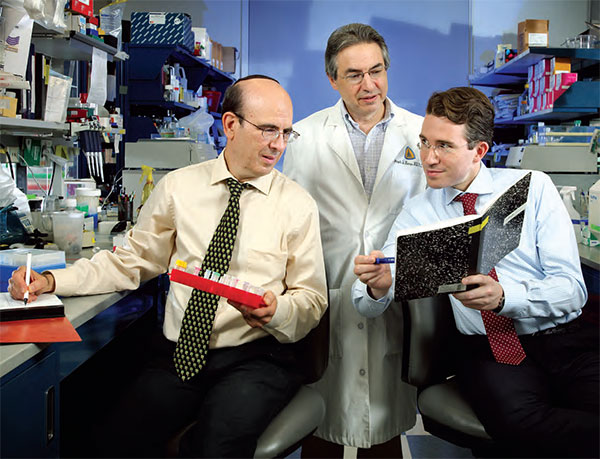 From left: Friedman, De Marzo, and Haffner: Prostate cancer has many ways to trick the body, so it can grow unhindered. Figuring out how to undo those tricks and unleash the body’s powerful immune system could make a huge difference in even the most aggressive cancers.

“This is a four- to five-times higher risk than for men with low- and very low-risk prostate cancer.”

Among the many changes that happen when prostate cancer becomes metastatic is a weird kind of freeze-tag, played at the protein level between cancer cells and cells of the immune system. It’s highly specific and tends to happen much more often in metastatic cancer than in cancer that is confined to the prostate.

The key players here are PD-1, a protein expressed on immune cells, and PD-L1, its doppelganger, found on some cancer cells. When these two “partner-proteins” meet, PD-L1 takes over and “The anti-cancer immune response is turned off; PD-L1 puts the brakes on the immune system,” says pathologist Michael Haffner, M.D., Ph.D. “Cancer cells are using PD-L1 to dampen the immune response.”

Is it possible to break this hypnotic spell – to snap the immune cells out of their stupor, so they can start fighting cancer again? Yes: “By blocking the interface between PD-1 and PD-L1,” which is already happening with some new immunotherapy drugs called checkpoint inhibitors, “the immune system can be unleashed to eliminate cancer cells,” explains pathologist Angelo M. De Marzo, M.D., Ph.D., Associate Director of Cancer Research Pathology. But in order to target this mechanism effectively, it’s important to know just what we’re dealing with, says Haffner: “How often is PD-L1 being used as a defense mechanism by prostate cancer to fight the immune attack?”

Is it possible to break this hypnotic spell – to snap the immune cells out of their stupor, so they can start fighting cancer again? To address this question, Haffner and De Marzo worked with a team of Hopkins investigators including Gunes Guner, William Nelson, Srinivasan Yegnasubramanian, Tamara Lotan, Jun Luo and Emmanuel Antonarakis, and colleagues from the University of Michigan and Columbia University. Together, in a study published in the American Journal of Pathology, they analyzed nearly 600 primary and advanced metastatic prostate cancers. “We found that PD-L1 expression is present in only a small subset of primary tumors,” notes Haffner. However, PD-L1 was present in one-third of advanced metastatic prostate cancers. The findings from this study provide new insight into what the immune system is doing – and not doing – in prostate cancer, and will help guide development of drugs that can get the immune system back to fighting cancer.