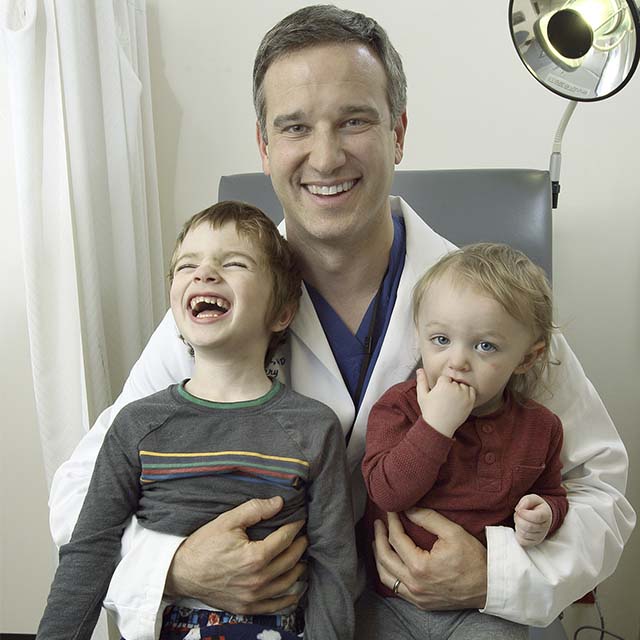 Pediatric neurosurgeon Eric Jackson with his two young patients from Georgia. As a physician scientist, Jackson is also participating in a clinical trial with 41 other centers to further determine best surgical approaches for Chiari malformation.

“Never before in my experience,” says Johns Hopkins pediatric neurosurgeon Eric Jackson, who on a recent Wednesday operated on two brothers from Georgia with Chiari malformation type 1, a serious condition that can be marked by structural defects in the base of the skull. “We’ve all operated on siblings with Chiari malformation but at different times. Because this family was traveling from Georgia, we tried to accommodate them.”

Indeed, the experience was a first for the family, as well.

“They both needed the surgery, and I can only take off a certain amount of time from work,” says Annie Hilscher, the boys’ mother and a nurse. “The opportunity just fell into our laps.”

Annie and her husband, Kurt, had first consulted with pediatric neurosurgeons at a hospital closer to home, who strongly suggested surgery for both boys. Daunted by that recommendation, the parents sought a second opinion and a pediatric neurosurgery service with deep experience and expertise in treating Chiari malformation. They had not planned on traveling 1,000 miles north but in their search they found Johns Hopkins Children’s Center and Jackson.

“When someone says your 4-year-old and 20-month-old need surgery, you want to make sure, so we brought them to Johns Hopkins,” says Kurt. “Why Johns Hopkins? It clearly provides some of the best care in the world—it was kind of a given.”

Jackson agreed that both boys needed corrective surgery for Chiari malformation, which occurs when the lower part of the cerebellum extends below the opening in the skull—the foramen magnum—into the upper spinal canal. This can block the flow of cerebrospinal fluid, and may result in headache, neck pain, balance issues, sensory changes and difficulty swallowing, among other symptoms.

“The symptoms result from the lower part of the cerebellum, the cerebellar tonsils, being compressed against the brainstem and spinal cord,” says Jackson. “The goal of surgery, called a Chiari decompression, is to create more room to relieve that pressure.”

In both procedures, Jackson and the surgical team accomplished that goal, though the surgery for Miles, the younger brother, was more complicated because his cerebellar tonsils had stretched far down the cervical spine. To make room, in addition to removing the back of C1, which is standard in Chiari decompression, part of the C2 vertebra had to be removed, which can increase risk of spinal deformity.

“The procedure can be a bit more challenging for younger patients like Miles because the skull is thinner and at higher risk for fracture, so it alters the way we position patients for surgery,” says Jackson.

Miles presented another issue, as well. He has an atypical large draining vein in the dura mater that prevented opening this membrane enveloping the brain and spinal cord, which generally has been associated with a better decompression.

“It’s pretty well established if you open the dura, there’s a better chance of it being successful up front,” says Jackson. “On the other hand, there are additional risks as well.”

Determining which patients with Chiari malformation will benefit from surgery is not an easy decision, notes Jackson. That is why he consults with his colleagues in pediatric neurology, as well as with fellow pediatric neurosurgeons, on a case-by-case basis. Patients with Chiari malformation tend to present with many symptoms, although not all symptoms respond to surgery.

“As a group we tend to look at the whole picture and try to make sure there’s not anything additional going on,” says Jackson. “The more that is involved in this surgery, the greater the risk. It’s finding the balance and tailoring the surgery for each individual patient to optimize their chance of success.”

At discharge, both boys appeared to be on track for a good outcome, says Jackson, who will follow up with MRI scans in about three months to make sure his young patients are healing well. For the parents, the long trip from Georgia was well worth the effort.

“We wanted to be at a place where they had all the experience taking care of patients with Chiari malformation,” says Annie. “It was just more comforting for us. Safety was paramount and the number one reason we chose Johns Hopkins.”