“Most of the benefit from ipilimumab plus nivolumab appeared to occur in patients who had one of these gene mutations, particularly in two men with BRCA2 mutations.” 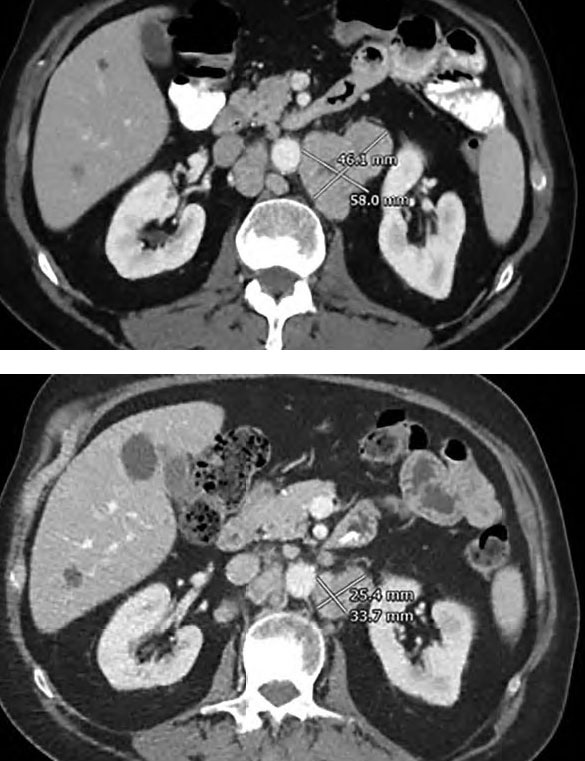 In one-quarter of the men, tumors shrank partially or completely with the combined immunotherapy. Here’s an example from one man. Look at the mass marked with the X in the image on the top. Below is the same man, 24 weeks later. See how the cancer has shrunk. “These responses were durable and typically lasted more than nine months,” says Antonarakis.

Good news for some men with very aggressive prostate cancer: in a small study at Hopkins, a combination of two immunotherapy drugs has made a significant difference – shrinking tumors partially or completely – and two of 15 men have shown exceptional responses.

No one is suggesting that these drugs would produce the same promising results in all men with aggressive prostate cancer. Instead, this is an exciting example of precision oncology – finding the right drug (or combination of drugs) to work for the right patient and the right cancer.

The study, done by researchers at The Kimmel Cancer Center and The Brady Urological Institute and led by Emmanuel Antonarakis, investigated the use of combination checkpoint immunotherapy in the treatment of a lethal form of advanced prostate cancer. The findings were published in Oncotarget.

The 15 men in the study had AR-V7-positive prostate cancer; AR-V7 is an aggressive variant of the androgen receptor, first reported in a landmark paper by Jun Luo and Antonarakis (this can be diagnosed by a blood test). The men received a combination of immunotherapy drugs called “checkpoint inhibitors,” ipilimumab and nivolumab. This is the first clinical trial to target this specific form of prostate cancer, “which can lead to fatal disease in only six to nine months and has inadequate treatment options,” says Antonarakis. It is also the only published study of these combined immunotherapy drugs in prostate cancer.

Patients received treatment by IV infusion: 3 mg per kilogram of nivolumab plus 1 mg per kilogram of ipilimumab every three weeks for four doses, followed by a maintenance regimen of 3 mg per kilogram of nivolumab alone every two weeks thereafter. The patients were enrolled between December 2016 and October 2017. Two of the 15 men (13 percent) experienced a significant drop in PSA – by at least 50 percent. “More encouragingly,” notes Antonarakis, “one-quarter of patients achieved an objective response, meaning that their tumors shrank partially or completely. These responses were durable and typically lasted more than nine to twelve months.” But here’s the most exciting part: At least two of these patients were still alive more than 18 months later – which means that Antonarakis and Luo don’t even know how long the response will last, because it’s still happening.

Genetic mutations affect response, too: The men in this study were already different from many patients with advanced prostate cancer because of their AR-V7 variant. Were there other differences that might help predict which men will respond best to this double checkpoint inhibitor approach? Yes: the specific genetic mutations are very important. “Interestingly, six of 15 patients harbored damaging mutations in at least one DNA- repair gene,” notes Luo. These mutations were either germline (inherited) or somatic (mutations that just developed spontaneously as the cancer advanced). “In these six men, we detected gene mutations of BRCA2 (3 men), ATM (2 men), and ERCC4 (one man).

The job of DNA repair genes is to fix mistakes that occur in the DNA as cells divide – to keep a mistake from being repeated over and over again. “Remarkably,” notes Antonarakis, “most of the benefit from ipilimumab plus nivolumab appeared to occur in patients who had one of these gene mutations, particularly in two men with BRCA2 mutations. This finding is important, because BRCA2 is not a gene that was previously thought to sensitize patients to immune checkpoint inhibitors.” If this proves true in larger studies, “it will have profound implications for other diseases such as breast and ovarian cancers, where these genes are more frequently mutated.” An estimated 20 percent of men with metastatic prostate cancer have mutations in BRCA2 or related DNA-repair genes. “This study suggests that these gene mutations may be even more common in men with the AR-V7+ form of prostate cancer, perhaps as high as 40 percent.

Traditionally, immunotherapy has not been very successful in prostate cancer, and this is because compared to other forms of cancer, prostate cancer tumors have fewer mutations. This makes it easier for them to blend in with more normal- looking cells, “and camouflage themselves from immunological destruction.”

However: “While prostate cancer is generally regarded as a low–mutation- burden tumor, and immune-checkpoint inhibitors have resulted in only modest benefits when used alone, these results suggest that AR-V7+ prostate cancers may be associated with a greater number of DNA-repair gene mutations and a higher mutation load,” says Antonarakis. “This, in turn, could be further exploited by using combination immunotherapy. “If these findings are confirmed by others, this could offer hope to these patients with AR-V7+ disease who have few, if any, good treatment options.”

The study also showed that the combination of nivolumab plus ipilimumab was safe and tolerable in men with AR-V7+ advanced prostate cancer. “We did see some important side effects including colitis, pneumonitis and hepatitis – all caused by an over-activated immune system. These side effects were managed with prompt administration of steroids, which often resulted in reversal of these conditions.”

Encouraged by these preliminary findings, Antonarakis and his team are now expanding the study to include more patients. This larger study is currently open to enrollment (Click here for details), and is actively seeking participants. If you are interested, please call Mrs. Rana Sullivan at 410-614-6337.