“Our findings suggest that a man who carries one of these mutations may be better off with treatment rather than surveillance.” 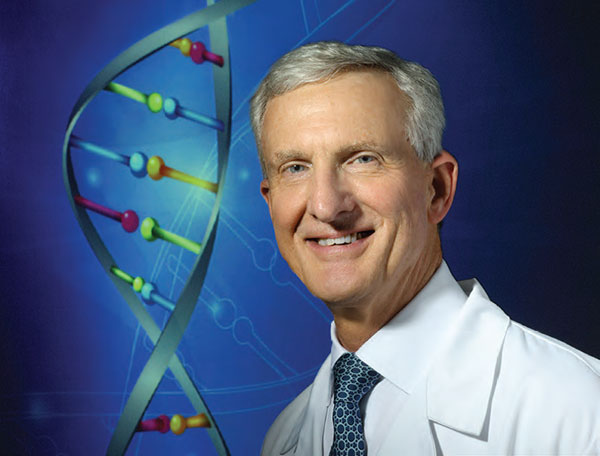 Carter: At the forefront of active surveillance research for prostate cancer since 1995.

H. Ballentine Carter is the pioneer of active surveillance (AS) for men with low-risk prostate cancer. Over the last two decades, he has found that for most men in this situation, careful monitoring is perfectly safe. But some men are more likely to develop higher-risk cancer. “We know that some men who pursue this strategy will lose the opportunity for cure,” Carter says, “either because a more aggressive prostate cancer was lurking within the prostate and was missed on prostate biopsy, or because the low-grade cancer progressed to a more aggressive form.”

Is there any way to predict? Carter and colleagues at Hopkins and North Shore Health System in Chicago have turned to the genes for clues. There are two kinds of genetic mutations: germline mutations are ones we’re born with; somatic mutations just develop on their own. Of particular interest in prostate cancer are recent discoveries by Johns Hopkins scientist William Isaacs, Ph.D., and others that men who have germline mutations in DNA- repair genes such as BRCA1 and BRCA2 (better known for being linked to breast and ovarian cancer) are more likely to develop aggressive prostate cancer.

Recently, Isaacs, the William Thomas Gerrard, Mario Anthony Duhon and Jennifer and John Chalsty Professor of Urology, with Jianfeng Xu and colleagues at North Shore, explored the relationship between mutations in three DNA-repair genes – BRCA1, BRCA2, and ATM – and lethal prostate cancer. They found that only 1 percent of men with localized, low-grade prostate cancer had germline mutations in these three genes, as compared to 6 percent of men with lethal prostate cancer. Further, men with one of these defective genes who developed aggressive prostate cancer tended to die from it sooner after diagnosis, and at a younger age.

“Our findings suggest that a man who carries one of these mutations may be better off with treatment rather than surveillance.” How might this affect men in AS – or, as Carter puts it: “Might a germline mutation in a DNA-repair gene tip off the urologist that a man with a low-grade prostate cancer considering surveillance should think twice?” To find out, Carter, Isaacs and biostatistician Mufaddal Mamawala, with North Shore scientists Xu, Brian Helfand, and Charles Brendler, looked for germline mutations in 1,211 men with low-risk cancer enrolled in AS at Hopkins and North Shore. From blood samples, they sequenced 54 DNA-repair genes, then looked for links between mutations and “grade reclassification,” the finding of higher-grade cancer on follow-up biopsies.

Among men who inherited a mutation in BRCA1/2 or ATM, the rate of grade reclassification – the finding of higher- grade cancer – was 42 percent compared to 23 percent of other men, says Carter. Upon observation, significantly more men – 55 percent – who carried the mutated BRCA2 gene alone were found to have higher-grade cancer (such as Gleason 3 + 4).

The 51 other DNA-repair genes evaluated were not so clearly linked to the risk of higher-grade cancer. “At this point, we are not suggesting that all men considering AS undergo gene sequencing to look for DNA-repair gene mutations,” and larger studies are needed to confirm these findings, he states. “However, men who have a family history of lethal prostate cancer or other cancers (such as breast, ovarian, or pancreatic), especially across multiple generations and affecting younger people (in their fifties or younger), should consider testing.” Although for the majority of men considering AS, the risk of such a mutation is low, “our findings suggest that a man who carries one of these mutations may be better off with treatment rather than surveillance.”