"How many more BRCA2-like genes can predict aggressive disease risk and drug sensitivity? So far, the list of these genes is quite short." 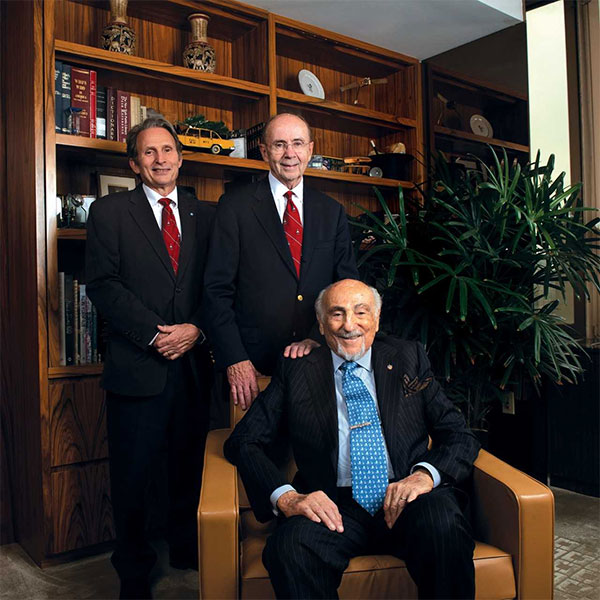 So much to celebrate! From left: William Isaacs , Patrick Walsh with philanthropist Bernard Schwartz (seated). Schwartz has been a good friend to The Brady for many years: with his late wife, Irene, he established the Bernard L. Schwartz Distinguished Professorship in Urologic Oncology in 1996, once held by Alan Partin and currently held by H. Ballentine Carter. In 2000, Schwartz answered another call and established the Schwartz Research Fund to explore the role of dietary factors in the initiation and progression of prostate cancer, and when Walsh stepped down as Director of The Brady in 2004, Schwartz once again made a substantial gift to The Patrick C. Walsh Prostate Cancer Research Fund and became a member of our Founders’ Circle.

“Every year, worldwide, an estimated 1,111,700 men are diagnosed with prostate cancer and 307,500 men die from it,” says William Isaacs, Ph.D., the William Thomas Gerrard, Mario Anthony Duhon and Jennifer and John Chalsty Professor of Urology. “The wide discrepancy between these two numbers shows that only a subset of these cancers progress to lethal disease.” This is good news for most men with prostate cancer – but men who have, or are at risk of getting, aggressive prostate cancer are desperately in need of smarter diagnosis and more specific treatment.

The key to more precise treatment for aggressive prostate cancer is in understanding the genes of that man’s specific cancer. Some drugs work much more effectively against particular mutated genes when cancer has escaped the prostate. Even when cancer is caught in the early stages, it’s critical to understand a man’s genetic risk – whether his cancer is aggressive or more benign.

A mutated version of the HOXB13 gene, discovered by Isaacs and his team, is the first verified prostate cancer susceptibility gene. Isaacs and colleagues at other centers have also discovered that more commonly mutated genes – defects that can cause several different types of cancer – are major factors in inherited prostate cancer risk, as well. For example, “work from our lab and others has shown that BRCA2 mutations increase the risk not only for prostate cancer, but for an aggressive form,” says Isaacs. In fact, “we now know that about one in 10 men who die from prostate cancer carry a damaged copy of BRCA2 or another gene involved in DNA repair, such as ATM.”

Finding one of these mutations in a man with prostate cancer has implications for his family, as well: “each child has a one-out-of-two chance of inheriting the risky gene. How many more BRCA2-like genes can predict aggressive disease risk and drug sensitivity?” Isaacs wonders. “So far, the list of these genes is quite short.”

As part of The Patrick C. Walsh Hereditary Prostate Cancer Program, “in an effort to find additional genes that can predict prostate cancer risk, we have begun a large study, sequencing each of the over 20,000 inherited genes from different sets of prostate cancer patients: men with highly aggressive or lethal disease, men with more indolent or benign disease, and men with multiple affected family members.”

So far, Isaacs and his team have found a number of candidate susceptibility genes: mutated genes that are more common in men with aggressive disease than in men with low-risk disease, and are present in multiple members of prostate cancer families. “We are in the process of testing these candidates now,” says Isaacs. “So far, at least one gene has emerged that is worthy of further study: a gene called PPFIBP2, which also has been implicated in metastatic breast cancer. “They have found mutations in this gene more often in men with aggressive prostate cancer than in men either with less-aggressive disease, or men who don’t have prostate cancer. Also,“we have observed multiple families where each affected member carries the same mutation in this gene.”

Much more work is needed, Isaacs notes. One day, he hopes, the presence or absence of such genes “will guide our treatment decisions, so that every man is treated appropriately for his specific prostate cancer risk.”

THE BEST BIRTHDAY PRESENT EVER

“For the first time, we have the potential to identify every gene involved in hereditary prostate cancer.”

On February 13, 2018, Patrick C. Walsh, M.D., University Distinguished Service Professor Emeritus, and Director of The Brady for three decades, turned 80. The Brady wished to honor this milestone, and asked Walsh for his suggestions. He recommended that we contact his former patients, asking for their help in completing the work he began in the 1980s with molecular biologist William Isaacs, Ph.D., the William Thomas Gerrard, Mario Anthony Duhon and Jennifer and John Chalsty Professor of Urology.

“In honor of his 80th birthday, we wanted to recognize Pat Walsh with a gift that would bring him great pleasure and fulfillment. Through the generosity of many of his friends and longtime patients, we have established The Patrick C. Walsh Hereditary Prostate Cancer Program, to determine the genetic causes of, and develop effective treatments for, hereditary prostate cancer,” says Alan W. Partin, M.D., Ph.D., The Jakurski Family Director and Professor.

The Brady is uniquely poised to carry out this mission, Partin adds: “Over the past 30 years, with Dr. Walsh’s leadership, we have built one of the world’s largest collections of hereditary prostate cancer samples, with more than 3,000 families and 8,000 individual patients, available for sequencing studies. With funding, we will use advanced DNA sequencing technologies to find the genes responsible for the strong hereditary predisposition to the disease.”

Already, with generous support from more than 125 donors from the U.S. and several other countries, this project is under way and sequencing has begun. The first major contribution came from Bernard Schwartz, a longtime supporter of The Brady and member of our Founder’s Circle.

There’s even more to come: The Brady plans to raise funds to start a Hereditary Prostate Cancer clinic, to be run by urologist Christian Pavlovich, M.D. This will include a comprehensive genetic testing and counseling program to test men for mutations in important genes related to prostate cancer: HOXB13, as well as DNA-repair genes such as BRCA1, BRCA2, ATM, and the others that we expect to discover as a result of the current sequencing efforts.

For the first time, we have the potential to identify every gene involved in hereditary prostate cancer. This history-making project will help thousands of men and their families to understand their family cancer risk, seek early detection and treatment, and save many lives.