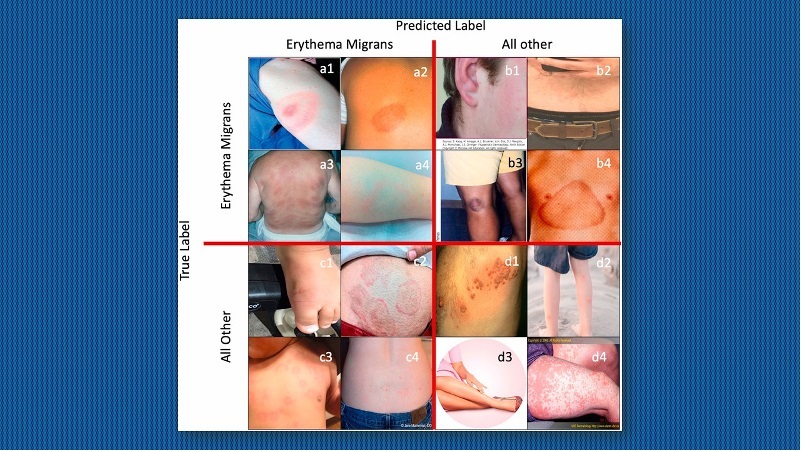 Examples of correct and incorrect visual identifications of the erythema migrans (EM) rash commonly seen in patients with Lyme disease. The images in the top right quadrant actually are EM (true positives). The upper left photos are false negatives, the lower left are false positives and the lower right were correctly ruled out as EM (true negatives). A new AI/deep learning technique from Johns Hopkins Medicine and the Johns Hopkins Applied Research Laboratory greatly increases the chances of correctly identifying EM in photographs.

Though the target-shaped rash known as erythema migrans is thought to be present in about 70% to 80% of Lyme disease cases, distinguishing it isn’t as simple as it sounds, says Lyme disease expert and infectious diseases physician John Aucott.

“It looks like many other kinds of more benign rashes and insect bites,” Aucott says. “And this can lead to missed critical opportunities for early diagnosis.”

Because many of Aucott’s patients send him photos of rashes via smartphone, it occurred to him that an app may help them self-identify rashes suspicious for erythema migrans and prompt them to seek care. Toward that aim, Aucott joined forces with Philippe Burlina, an artificial intelligence researcher at the Johns Hopkins University Applied Physics Laboratory. Together, they’ve spent three years developing the prescreening tool.

“To distinguish erythema migrans from other rashes, the first step in creating a machine-learning paradigm is to train the system,” says Burlina. To begin to do so, he and Aucott gathered as many images as they could of this rash. “The more data you have, the better it is,” he says. 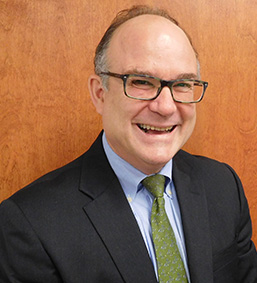 Our ultimate goal is for cellphones to be the first step in helping people get early diagnosis and avoid more serious complications of Lyme disease.” -- John Aucott

But the team immediately encountered a host of challenges: Professional datasets with high-quality photos contained too few images, so the researchers turned to the hundreds, if not thousands, of photos of erythema migrans available on the internet. However, Aucott says, most of these images have been taken “in the wild,” or under conditions that made quality inconsistent. Many were misclassified as erythema migrans. Additionally, only a fraction included individuals with dark skin, limiting the potential data.

Using human curators to weed through this wealth of images, the researchers narrowed their training set and taught deep learning networks to distinguish erythema migrans from healthy skin. Gradually, they introduced “confusers,” images of similar skin conditions such as ringworm or cellulitis. This further trained the system. Because erythema migrans changes uniquely over time, they hope to add a dynamic element to their artificial intelligence program to make it more accurate.

With their colleagues, Aucott and Burlina have produced five publications as they inch closer to their goal.

“We don’t want people to do what they do now, which is say, ‘oh, it’s a bug bite,’ and never seek care,” Aucott says. “Our ultimate goal is for cellphones to be the first step in helping people get early diagnosis and avoid more serious complications of Lyme disease.”

The technology is available for licensing through Johns Hopkins Technology Ventures.