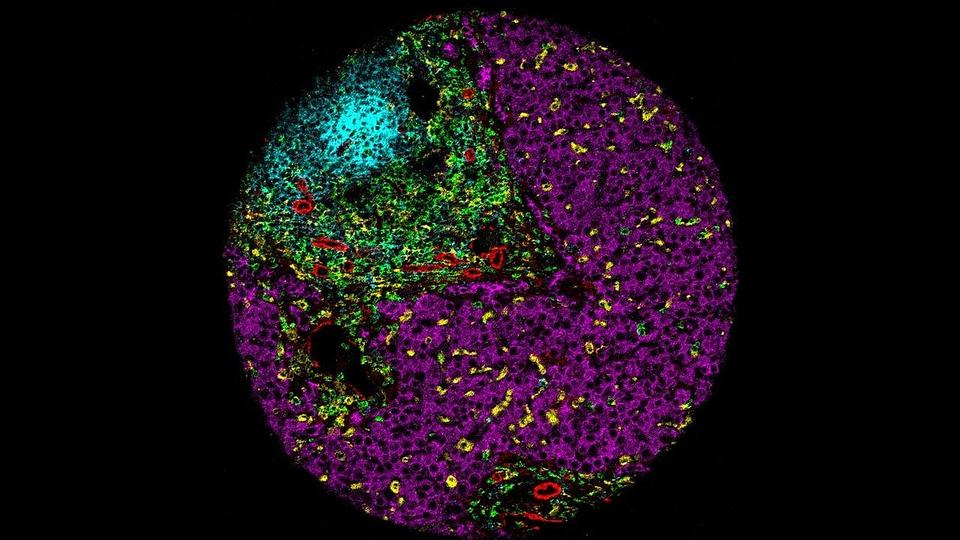 A new study from @hopkinskimmel experts @MarkYarchoan and @wonjinho1 shows a drug combination can make curative surgery possible in patients with #livercancer who were not previously candidates for surgery. Click to Tweet

A combination of the kinase-inhibitor drug cabozantinib and the immunotherapy drug nivolumab can make curative surgery possible in some liver cancer patients who would normally not be considered surgery candidates.

Results published July 29 in the journal Nature Cancer by researchers at the Johns Hopkins Kimmel Cancer Center describe the benefits of this drug combination. Among 15 people with hepatocellular carcinoma (HCC) in the study who could not be treated previously with surgery, the drugs allowed 12 patients to undergo successful surgical removal of their cancer. Five of these 12 patients had only 10% or less of their tumor remaining after the drug treatment.

The combination therapy offers a much-needed treatment for HCC, which makes up more than 90% of all primary liver cancers and is the fourth leading cause of cancer-related death worldwide. Fewer than 30% of HCC cases globally can be surgically resected at the time of diagnosis, either because the liver is too damaged or the cancer has spread into tissues that make surgery too difficult.

“The patients who are enrolled in this study are typically just thought of as incurable in the current conventional sense, so the fact that we saw these responses was really exciting, because this suggests this strategy could be adopted for very challenging incurable diseases,” says Won Jin Ho, M.D., assistant professor of oncology at the Johns Hopkins University School of Medicine and first author of the study.

HCC is unusual among solid-tumor cancers because there have been no systemic therapies used to treat the cancer to make it more amenable to surgery, says Mark Yarchoan, M.D., assistant professor of oncology at the Johns Hopkins University School of Medicine and senior author. “We had a hunch that there were patients who were currently incurable that we could get to a surgery who would do well, and sure enough, there was a group of patients who participated in this study who are alive today without tumor who would not have been offered surgery before.”

The findings also suggest that the drug combination could help with rates of cancer recurrence after surgery. Even among patients who have successful surgeries, the rate of recurrence can be 50% or higher. In the current study, the researchers found that the five patients who underwent surgery and had their tumors shrink significantly have remained disease free for more than 230 days so far. Four of the seven patients who did not have a significant tumor response developed disease progression between 56 and 155 days after the end of treatment.

Cabozantinib and nivolumab have been used separately and in combination to treat advanced liver cancer before, but the researchers wanted to test their use specifically to see whether they could make more patients eligible for potentially curative surgery.

“We wanted to use a combination that reflected the standard of care,” says Yarchoan, “and this combination reflected where we feel the field is going in terms of using two drugs together to try to maximize the therapeutic effects.”

All of the patients were recruited from the Kimmel Cancer Center’s Liver and Biliary Cancer Multidisciplinary Clinic, where patients are evaluated by multiple experts in surgery, pathology, medical oncology and other disciplines to come up with a comprehensive treatment plan. The multidisciplinary teamwork is good for patients but is also helpful in this type of study, Yarchoan adds. “At other institutions where you might just see a surgeon, there isn’t an opportunity to discuss adding in medicines.”

The research team took a closer look at the immune response and tumor microenvironment in blood and tissue biopsies from patients enrolled in the study to learn more about exactly how HCC responded — or didn’t respond — to the combination treatment. A technique called imaging mass cytometry allowed the clinicians to observe multiple types of cells at once, “and really understand their relationships with one another,” says Ho.

For instance, the researchers note that a distinct aggregation of immune B cells was indicative of a response to cabozantinib and nivolumab, supporting a strong antitumor response. The technique also helped the researchers see how the proximity of B cells and T cells to some macrophage immune cells with an immunosuppressive effect was characteristic of tumors that were resistant to the combination treatment.

Going forward, this type of in-depth look at the tumor microenvironment could help clinicians search for drugs that promote a B cell response or reprogram immunosuppressive immune cells in the liver to make them more responsive to therapy, the researchers note.

The work was supported by the Johns Hopkins Bloomberg-Kimmel Institute for Cancer Immunotherapy, Emerson Collective Cancer Research Fund; grants P50 CA062924), P30 CA006973, U01 CA212007 and U01 CA21200 from the National Institutes of Health, Exelixis and Bristol Myers Squibb.