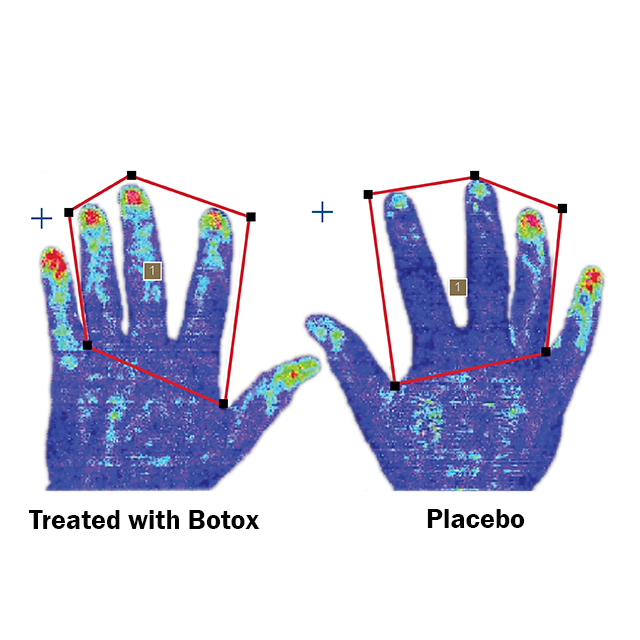 Image shows laser Doppler imaging of blood flow to hand after treatment with Botox next to placebo.

Raynaud’s phenomenon (rp), a condition that causes vasospasms most commonly in the fingers’ arteries with exposure to cold, is a hallmark of scleroderma. It’s often the first symptom of the skin-hardening condition. Besides the nuisance of loss of sensation and discomfort, RP can lead to recurrent digital ulcers and critical ischemic events.

But despite the strong impact this condition has on patients’ quality of life, few good treatment options exist, says Scott Lifchez, director of the Hand Surgery Service at Johns Hopkins Bayview Medical Center. Some research has suggested that injections of botulinum toxin type A (Btx-A) may be helpful for patients with RP, Lifchez says, but these studies have been in heterogeneous populations, in small sample sizes, used varying doses of Btx-A or had other criteria that weren’t well controlled.

“This is off-label use, and a vial of Botox is hundreds of dollars,” says Lifchez. “If we’re going to try to convince an insurance company or patients themselves that this is worth the expense, we need better information.”

To investigate whether Btx-A could effectively treat RP in scleroderma patients, Lifchez and his colleagues conducted a study in 2015 in 40 patients of the Johns Hopkins Scleroderma Center.

In this randomized, double-blind, placebo-controlled trial, patients acted as their own control: Each received seven injections to selected sites in one hand and saline to the same sites in the other hand, with both patients and the provider who administered the injections unaware of which hand received the drug. Each patient received laser Doppler imaging to assess blood flow as well as various patient-reported measures at baseline and at one- and four-month intervals after treatment.

Results showed that this treatment wasn’t helpful to this patient population overall, with Btx-A actually reducing blood flow. However, patient-reported outcomes showed that symptoms had improved in a subset of the study participants: those who had limited scleroderma rather than diffuse scleroderma, those who had the disease for a shorter time and those who had already had a positive response to vasodilating drugs.

Although further study will be necessary to fully understand how Btx-A can best help scleroderma patients, Lifchez adds, he and his colleagues are already offering it to selected patients at Johns Hopkins.

“I have a growing number of patients who see me every fall to help them get through the winter,” he says. “We finally have something to offer for this debilitating condition.”