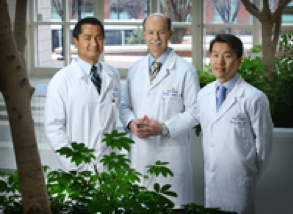 “There are patients with favorable and unfavorable intermediate- risk prostate cancer.”

End of Radiation PSA (EOR-PSA) is an important predictor of the success of radiation therapy. How important? Radiation oncologists Phuoc Tran, M.D., Ph.D., Theodore DeWeese, M.D., and colleagues are still finding out. Previously, they showed that undetectable EOR-PSA can predict survival in prostate cancer. Now they’re looking at how prostate cancer risk comes into play: particularly, for men who have intermediate-risk prostate cancer.

“Men with intermediate-risk (IR) disease don’t all have the same outcomes with standard treatments,” says Tran, who is working to make this category of cancer more precise, and then to fine-tune treatment for men accordingly. “There are patients with favorable and unfavorable IR prostate cancer.” EOR-PSA may be able to help determine which men have a good chance of being cured after radiation therapy, and which men need extra treatment.

Tran is senior author of a recent study of 302 men with IR prostate cancer who were treated at Johns Hopkins with radiation therapy between 1993 and 2006; the average period of follow-up was more than a decade. “We wanted to determine whether EOR-PSA could help us risk- stratify these men even further,” says Tran. Of these men, 178 had unfavorable IR, and 124 had favorable IR. “We found that EOR-PSA was helpful in predicting metastasis and prostate cancer death among patients with unfavorable IR. These findings suggest that we may be able to determine which IR men will require more intense treatment following radiation therapy,” with the hope that providing extra treatment “at a clinically meaningful time point” can make a critical difference for these men.