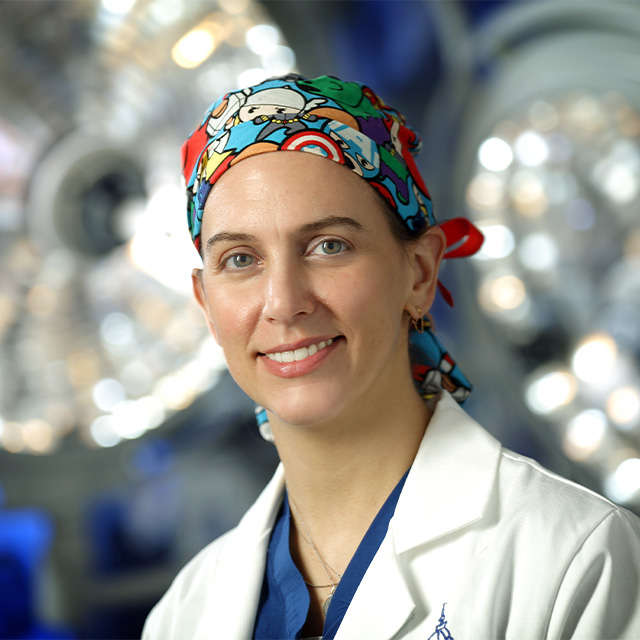 "We are asking parents to trust us with what is far and away most important in their life. That’s really special.”

Growing up, Erica Hodgman recalls, she heard stories from her mother about her experiences as a neonatal nurse at New York-Presbyterian Hospital in the 1970s, jumping on board medevac choppers to help rescue babies in need of emergency care. Hodgman also remembers rummaging through her mother’s medical textbooks, fascinated by the world of medicine the pages revealed.

“Needless to say, from then on I always knew I wanted to be a doctor,” Hodgman says. Laughing, she adds, “My mother clearly gave me the idea of becoming a pediatric surgeon.”

In ways, Hodgman has wedded her own vision as a physician with her mother’s experience as a savior of sorts for young patients. After medical school at Emory University, it influenced Hodgman’s choice to pursue treating children, and surgery to potentially have a dramatic impact on their outcomes — in other words, to save them.

“You can have a child on the verge of dying, who is that sick, and you can do your intervention, work together as a team, and that kid can not only survive and recover but go on to live a full life,” says Hodgman.

That realization came through a general surgery residency and burn/trauma research fellowship at the University of Texas, a pediatric surgery fellowship at Le Bonheur Children’s Hospital in Memphis, Tennessee, and a surgical oncology fellowship at St. Jude Children’s Research Hospital, also in Memphis. Underlying that technical training — and even medical school, for that matter — was a strong sense of advocacy that Hodgman gleaned from a program supporting first responders who had medical injuries from the 9/11 World Trade Center collapse.

“You have salty union plumber dudes who are suddenly finding human remains,” says Hodgman. “Everyone down there was trying to save lives and not thinking about themselves and basically breathing in a pulverized building, which turns out is something you really shouldn’t do.”

Lobbying congress through a partnership with the New York fire department and area hospitals such as Mount Sinai, Hodgman helped lead efforts to obtain federal funding for screening and treating the first responders for issues like heartburn, reflux and asthma-like diseases.

“That for me was like an aha moment for what you can do with research and advocacy,” she says. “You can actually have a good impact on people.”

As a burn and trauma surgeon at Johns Hopkins Children’s Center, Hodgman is beginning to segue that advocacy spirit into other areas — such as fire safety, injury prevention, gun control and social support for disadvantaged communities. Her research goals include development of evidence-based interventions to improve burn care and reduce pain by using better dressing options and laser therapies. For Hodgman, the mental health impact for patients and their families, some of whom suffer severe guilt and post-traumatic stress disorder, is another important issue.

“Some families have a huge amount of guilt, which can be a barrier for their participation in their child’s care,” says Hodgman. “They may already feel like they were negligent and hurt the kid, and now they have to hurt him again when they do the dressing change. It all compounds the guilt.”

Being a pediatric surgeon and all that comes with it is tough work, concludes Hodgman, but it is well worth it.

“We are asking parents to trust us with what is far and away most important in their life,” she says. “That’s really special.”