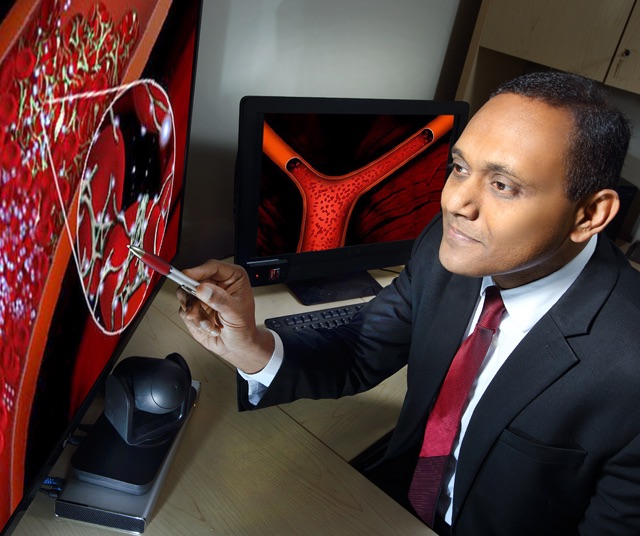 The vibration of microbubbles in the ultrasound field, pediatric cardiologist Shelby Kutty notes, releases vasodilator substances like nitric oxide in the vessel wall, improving perfusion downstream. This finding has implications for young children who undergo heart catheterization who experience needle trauma to the femoral artery, Kutty adds, which tends to reduce distal perfusion.

Before arriving at Johns Hopkins Children’s Center in 2018, pediatric cardiologist Shelby Kutty built a reputation at the University of Nebraska Medical Center as one of the foremost authorities in multimodality cardiovascular imaging. It was there in 2007 that he connected with adult cardiologist Thomas Porter, who was investigating an emerging field of medicine called theranostics, which combines diagnostics and therapeutics via imaging such as ultrasound. Porter was applying theranostics as a therapy for stroke in adults – targeting ultrasound energy vibrations to break up clots in the brain – and not as a treatment for cardiac conditions in children. Nonetheless, Kutty was intrigued.

“His aim was to use transcranial ultrasound with a modified energy and contrast microbubbles to lyse clots in stroke situations,” explains Kutty, the Helen Taussig Professor and chief of Pediatric and Congenital Cardiology. “The essential principle was he could see the ultrasound and contrast acting on the tissue, which really sparked my interest as an ultrasound imager with an interest in integrating and optimizing new technologies.”

While Kutty was exploring theranostic applications in children, he realized they are vulnerable to thrombus-forming conditions with limited therapeutic options, or therapies associated with serious side effects such as bleeding complications. Collaborating with Porter, he focused on complications of chronic indwelling central lines that are often used in pediatric patients. The two investigators found success in an acute thrombus pig model, which generated grants to study theranostic treatments to maintain the patency of central venous lines and intracardiac shunts, and also to treat femoral artery spasm. Young children who undergo heart catheterization experience needle trauma to the femoral artery, Kutty explains, which tends to cause spasm and reduce distal perfusion.

“We created models of femoral artery injury and then targeted ultrasound contrast-therapy to the injured site. The vibration of microbubbles in the pressure fluctuations of the ultrasound field releases vasodilator substances like nitric oxide in the vessel wall,” says Kutty. “Then we monitored distal pulse and perfusion downstream, and found that the perfusion improved.”

In another collaboration with cardiologist Jonathan Lindner of Oregon Health & Science University in Portland, Kutty plans to participate in a trial using theranostic therapy for limb ischemia to help alleviate the acute pain crises in patients with sickle cell disease. The vascular occlusion of red blood cells triggering the crises, Kutty notes, is an ideal target for theranostics.

"By applying theranostic energy, you are improving blood flow and relieving the painful crises in the vessels where sickle crisis is occurring,” says Kutty. “The specific vasoactive substances released by theranostic energy need to be worked out, as do the optimal ultrasound therapeutic parameters, but at the same time this is much closer to the clinical realm.”

Indeed, Kutty is exploring other clinical trials, including targeted theranostic therapy for young adults presenting in the emergency department (ED) with vascular pain – the therapy would reduce the need for morphine. He adds that given the accessibility and portability of ultrasound, its noninvasive nature, and its use by ED physicians, intensivists and obstetricians, among others make it a universally applicable tool. Its applications as a theranostics tool may have just scratched the surface, especially for children.

“Theranostics is happening in cancer care and nanotechnology, but it is totally unexplored in the pediatric setting,” says Kutty. “We have a wide open field in which it can be applied in cancer treatments for children, and in vascular and cardiac care. From a futuristic perspective, my vision is that the current diagnosticians, the radiologists and the imagers, will all become theranosticians.”