Finding and Treating Stray Cancer Cells Sooner than Ever

Martin Pomper, Heather Chalfin, and Ken Pienta. New findings by research Director Pienta and Brady resident Chalfin show men with localized prostate cancer are more likely to be cured than ever - and if cancer does recur, it’s likely to be in a nearby spot, which can be seen through PSMA PET technology developed by Pomper, and still curable. One exciting new avenue for treatment is being tested by Phuoc Tran in the ORIOLE study.

Reassuring news for men treated for localized prostate cancer: New findings by Brady investigators prove that you are more likely to be cured than ever. Even better: on the slim chance that cancer recurs, it is much more likely to be in a nearby spot that - thanks to new imaging and treatment pioneered at the Brady - can be detected and treated successfully.

These findings, which have been submitted for publication and were presented at the national Prostate Cancer Foundation meeting in October, overturn a 2009 study from the University of Washington whose results have been widely accepted - and have proven needlessly worrisome for many men with localized prostate cancer.

"Based on the 2009 study, the world thought that 70 to 80 percent of men had disseminated tumor cells (DTCs) in the bone marrow," says Ken Pienta, M.D., The Donald S. Coffey Professor of Urology, Professor of Oncology, and Professor of Pharmacology and Molecular Sciences, "which is really a scary number." And a scary idea - that "by the time we take your prostate out, 70 percent of men already had cancer cells in their bone." But that just didn’t jibe with what urologists and radiation oncologists at the Brady and elsewhere have seen for decades in their patients with localized prostate cancer: that most men do not have recurrence of cancer. They’re cured. So, says Pienta, "we set out to revisit that," in a research project with Brady resident Heather Chalfin, M.D. This work was made possible by support from philanthropists Carolyn and Bill Stutt, founding members of the Patrick C. Walsh Prostate Cancer Research Fund.

"DTCs are cancer cells that escape the primary cancer and enter a different organ, representing a first step toward detectable metastasis," explains Chalfin, "and a common landing zone for prostate cancer cells is the bone marrow."

But how common, exactly, is it for stray prostate cancer cells to find their way to the bone marrow in localized disease? Not very, and the Brady team discovered this by looking for prostate-specific evidence of cancer. In the 2009 study, the investigators used markers for epithelial cells (cells in the lining of tissue and organs), "which were not specific enough," says Chalfin. "In fact, normal men - and women - have cells with epithelial markers in the bone marrow."

Pienta: “Our evidence suggests that lymph nodes, instead of bone marrow, are the true reservoir of micrometastatic disease.”

Using prostate-specific markers, "we discovered that DTCs are only rarely found in localized prostate cancer. This changed our understanding of how prostate cancer metastasis occurs."

Or, as Pienta puts it, "Everything we thought was true is wrong."

What this means for patients is a revolution in treating cancer that has escaped the prostate. "Our evidence suggests that lymph nodes, instead of bone marrow, are the true reservoir of micrometastatic disease in localized men who experience biochemical recurrence," Chalfin says.

This discovery couldn’t have come at a more opportune time - because now we have the technology to see where that cancer is hiding. Several years ago, Brady investigator Martin G. Pomper, M.D., Ph.D., Director of Nuclear Medicine and Molecular Imaging, solved a puzzle that had frustrated scientists for decades. In the past, scientists tried to engineer antibodies to recognize prostate-specific molecules, particularly PSMA (prostate-specific membrane antigen, which sits on the surface of prostate and prostate cancer cells), and then add an imaging agent that glows in the presence of those antibodies. “That approach was used for years,” says Pienta. “The problem is that the antibody doesn’t work well and generally falls off in the liver. What Marty did was to find a urea-based small molecule that actually binds to PSMA.” This tiny “grabber,” or “linker,” molecule sticks to PSMA like glue - but that alone wouldn’t be nearly as noteworthy if Pomper hadn’t also used innovative chemistry to glue F18, the radioactive fluorine that glows in a PET scan, to that small molecule.

Previously, doctors could only track a rising PSA and wait until cancer grew big enough to cause symptoms or show up on a bone scan or MRI. 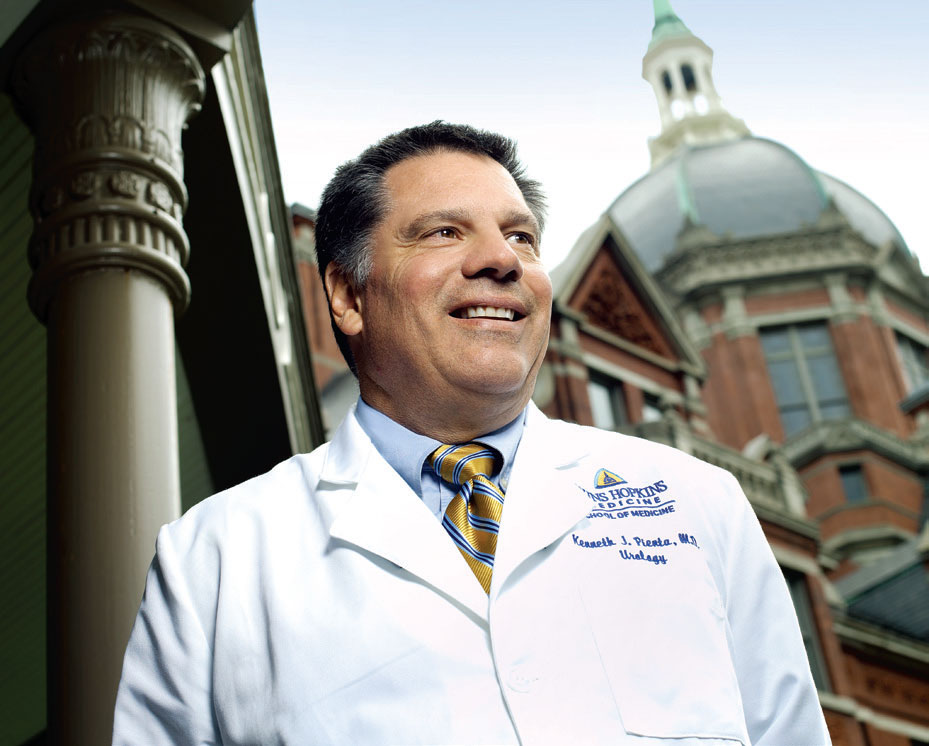 Pienta: “Our evidence suggests that lymph nodes, instead of bone marrow, are the true reservoir of micrometastatic disease.”

Brady physicians and scientists are at the leading edge of a sea change in treating small bits of cancer that have made their way out of the prostate early, before they turn into full-blown metastasis. This is called oligometastasis, and it is treatable. “In men who have biochemical recurrence - say a PSA of 0.5 ng/ml after radical prostatectomy - the typical thing to do is go ahead and irradiate the whole pelvis,” says Pienta. “But if we can spot the cancer and it’s just in a single lymph node, we can actually try to just irradiate or remove that one lymph node - and ideally we can save that man from whole pelvis radiation and ADT,” androgen deprivation therapy, or hormonal therapy. If a spot of cancer does show up in the bone, it can be treated focally, as well, with stereotactic radiation. Radiation oncologist Phuoc Tran, M.D., Ph.D., is leading a clinical trial doing this. But what about men who have more than a few small bits of cancer? Ther e’s new hope here, too, says Pienta. “There are new clinical trials available for men with lots of disease who light up with PSMA PET imaging, and we now know that we can attach a radioactive bomb to the PSMA molecule.”

This is Pomper’s chemistry, now being used for treatment as well as detection. Using an analog of Pomper’s grabber imaging molecule, physicians in Germany have been treating men with metastatic prostate cancer for several years. However, they have not performed clinical trials using this technology, and although some men have experienced remission of cancer, they have also had significant side effects, including the loss of their salivary glands. Another issue: several different radioactive molecules, called radioligands, can be used to kill the cancer, and it may be that the side effects are fewer with one type than with another. Pienta co-led a “think tank” meeting with scientists in September to establish clinical trials that will determine the safest and most effective way to use these radioligands. Could these radioligands work even better in combination with immunotherapy? Pienta believes they might. The new class of immunotherapy drugs called checkpoint inhibitors is causing its own revolution - putting men and women with widely metastatic forms of cancer, including lung, breast, prostate, bladder, and melanoma - into long-term remission. These drugs don’t work for everybody, and scientists believe that’s because not everyone has the same checkpoint involved. Briefly, cancer has a diabolical way of putting the body’s great immune warrior cells, T cells, to sleep. It dupes checkpoints, which are molecules that control the T cells, into thinking all is well: think of security guards looking at a bank of video camera feeds, where nothing is happening on screen - because the crooks have hijacked the cameras and are showing the same uneventful scenes over and over again. There are different checkpoints, and new drugs that target them individually.

Pienta suspects that radioligands might galvanize the immune system - and make immunotherapy drugs work better - by “killing some of the cancer cells, releasing pieces of cancer,” called neoantigens, “not normally seen by the immune system. This would allow the immune system to recognize that cancer is present,” so it can start to attack these foreign invaders.

But that’s not the whole story with today’s immunotherapy breakthroughs. Cancer also dupes macrophages - immune cells that are like bouncers at a bar to keep out the riffraff - into letting in cancer cells, and keeping out the T cells. Pienta is a pioneer in the study of macrophages in cancer, and is investigating and designing new therapies to knock out these macrophages.

This work, and the work on DTCs, and Pomper’s PSMA-targeting small molecules, are generating huge momentum, and this is a very exciting time at the Brady, says Pienta. “We’re really defining new ways to understand prostate cancer. Thanks to Carolyn and Bill Stutt, we have a new window into how prostate cancer occurs, and when and where it spreads, and this leads us to new ways to treat it with fewer side effects.”