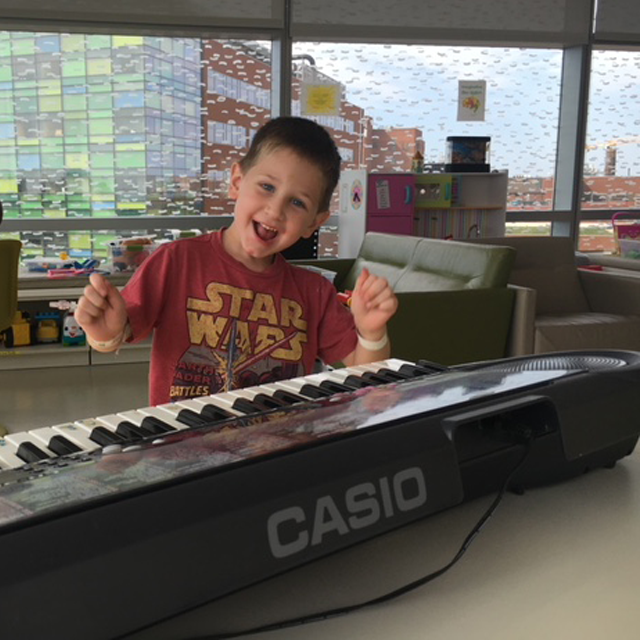 Joseph in a playroom at the Children's Center

On Labor Day 2016, Columbia, Maryland, 5-year-old Joseph Livingston was enjoying a neighborhood block party when fireworks ignited by a neighbor malfunctioned and suddenly turned his joy into terror. Marianne Livingston, Joseph’s mom, explains that instead of shooting up into the air “they shot out sideways in all different directions,” some toward Joseph who was sitting some 50 feet away. Stunned, Joseph sat still as parents scooped up children and ran past him to safety. Then an explosive projectile found its way up Joseph’s shorts, igniting them and burning his thighs and buttocks.

“It happened so fast, before we knew what was happening,” says Livingston.

She immediately drove Joseph to the emergency department (ED) at Howard County General Hospital, where physicians transferred him by ambulance to Johns Hopkins Children’s Center, designated the state’s regional pediatric burn center by the Maryland Institute for Emergency Medical Services Systems. Pediatric emergency medicine physician Therese Canares assessed Joseph’s injuries as partial-thickness burns and sedated him, then pediatric ED nurses trained in pediatric burn wound management debrided, or cleaned, his wounds. These nurses are also trained and experienced in providing fluid resuscitation for patients with more severe burns, those over 15 to 20 percent of their body surface.

While Joseph’s body responded to treatment, like many victims of burn injuries he suffered psychological injuries that also needed attention, such as a sudden fear of loud noises and other signs of post-traumatic stress disorder. That is one reason the pediatric burn center is staffed by a multidisciplinary team that includes child psychologists, in addition to pediatric surgeons and critical care and pain management specialists. How is Joseph doing today?

“He’s a strong little boy, very resilient, and he’s doing much better now,” says his mom. “He was very cautious around fire for a long time, but now he’s roasting marshmallows. Of course, he hates fireworks.”

That is a natural reaction for young children, says Canares, who urges parents to be well educated about the risks of burns and other injuries related to fireworks and how best to respond (see sidebar). For Livingston, the answer is clear and consistent with the American Academy of Pediatrics position: no more informal fireworks displays.

“In our family,” she says, “from this point on fireworks will be left to the professionals.”

What Should Parents Do?

Fireworks were involved in an estimated 12,900 injuries treated in hospital emergency departments in the United States during calendar year 2017, according to the Consumer Product Safety Commission. Children younger than 15 years of age accounted for 36 percent of the injuries, 53 percent of which were burns. What should parents do when their child is burned? Pediatric emergency medicine physician Therese Canares has some thoughts.

Do you see many fireworks-related burn injuries this time of year?
Canares: Burns from fireworks are not common but when we do see them, they tend to be quite severe and, in some cases, devastating.

What should parents do when their child suffers a burn?
Canares: If it is a superficial burn—a burn at the level of a sunburn—parents can treat it with home remedies, such as running the wound under lukewarm water. The more recent literature recommends lukewarm water because very cold water can cause blood vessels to constrict and impair wound healing.

When should parents seek professional care or call 911 for their child with a burn?
Canares: If the wound is blistering and layers of skin have been removed, parents should seek emergency care so that the wound can be evaluated and possibly debrided, or cleaned. Also, seek medical care if there are blisters on sensitive body parts, including the face, genitals, hands, feet, and on skin over joints such as the wrists and elbows.

What if there is only minor blistering?
Canares: Generally, the rule of thumb is when blisters are greater than 2 centimeters, which is a little wider than the width of your index finger, parents should seek emergency care so that the wound can be debrided. When to call for an ambulance is often a judgment call.

The Pediatric Burn Center at Johns Hopkins Children’s Center is among only a dozen pediatric burn centers verified by the American Burn Association as providing the highest level of burn care for children in the United States.