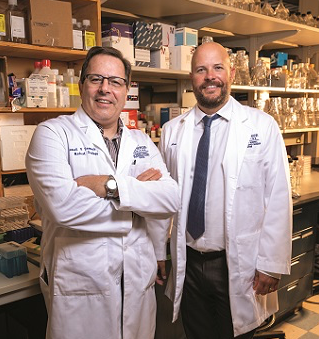 Could the flat-out opposite of conventional wisdom prove to be effective against metastatic prostate cancer?

Exciting results of Hopkins-led studies are causing scientists to rethink androgen deprivation therapy (ADT) – the bedrock of treatment for advanced prostate cancer for more than half a century – and driving new approaches to tackle treatment resistance.

ADT slows down prostate cancer by shutting off testosterone. Eventually, however, cancer finds a way around ADT. Also, ADT has significant side effects, including fatigue, hot flashes, weight gain, and loss of sexual function.

Several years ago, medical oncologist Samuel Denmeade, M.D., Co-Director of the Prostate Cancer Program, and colleagues found a remarkable way to shake up cancer: alternating ADT with high-dose testosterone. Denmeade led a clinical trial of Bipolar Androgen Therapy (BAT) in men with metastatic prostate cancer, with promising results: “At the end of treatment, 70 percent of men remained responsive to ADT and only 30 percent had developed resistance.” During the testosterone period, quality of life and sexual function improved significantly and side effects were minimal.

“Overall, this study demonstrated that high-dose testosterone can be safely alternated with ADT as a means to improve quality of life and sexual function while potentially delaying the development of resistance,” he says. Denmeade then tested BAT in men who were resistant to ADT. “We found that many men responded to BAT. In addition, BAT was able to sensitize patients’ cancers to subsequent therapy to the antiandrogen, enzalutamide.”

Building on Denmeade’s work, Hopkins investigators Mark Markowski, M.D., Ph.D., and Emmanuel Antonarakis, M.D., (now Director of Genitourinary Oncology at the University of Minnesota) recently conducted a clinical trial of a whole new tactic: treating metastatic prostate cancer with a combination of high-dose testosterone and immunotherapy – and no ADT at all! “Although the treatment of metastatic prostate cancer generally involves lowering testosterone,” says Markowski, “we have studied the utility of testosterone supplementation as a primary form of therapy.”

In BAT, men experience high testosterone levels that decrease over a 28-day period, then bounce back up with the next testosterone injection. “We have found that this monthly cycling can have a profound anti-cancer effect,” says Markowski.

In a related discovery, the Hopkins team also has observed significant clinical benefit in several patients who underwent immuno-therapy after treatment with BAT. This led the team to conduct COMBAT, a small Phase 2 study involving 45 men with metastatic castration-resistant prostate cancer (mCRPC), who were treated with BAT in combination with nivolumab (an immuno-therapy agent targeting PD-1). Their results were presented at the 2021 annual meeting of the American Society of Clinical Oncology.

“We saw an impressive clinical response rate of 40 percent,” says Markowski. “We also observed a durable benefit, lasting over a year, in several patients who had received extensive prior therapies.” The combination of BAT with nivolumab was safe and well tolerated by the participants.

The next steps: Markowski, Denmeade and colleagues are working to identify a molecular profile of those patients with the deepest and longest-lasting responses. Markowski and Antonarakis are designing a randomized Phase 3 study to compare combined BAT plus nivolumab versus standard treatments for patients with mCRPC.