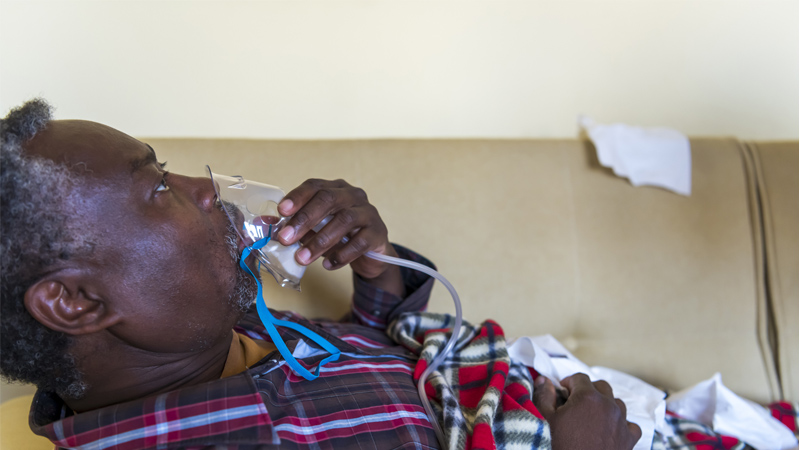 Socioeconomic status — for both individuals and the neighborhoods in which they live — can negatively impact the health outcomes for Blacks with chronic obstructive pulmonary disease and other respiratory illnesses. (Getty Images)

Research has shown that African Americans have worse health outcomes than non-Hispanic whites regarding respiratory illnesses such as chronic obstructive pulmonary disease (COPD). Now, a new study by Johns Hopkins Medicine researchers reveals that much of this racial disparity can be explained by differences in the socioeconomic status of individuals and neighborhoods.

The findings were published Oct. 2, 2020, in the American Journal of Respiratory and Critical Care Medicine.

In their study, the researchers looked at 2,649 current and former smokers, with or without COPD. They assessed racial differences for different COPD characteristics, including symptoms; results of functional and imaging tests, including scores on a COPD Assessment Test (the questionnaire that measures COPD’s impact on a person’s life); the ability to perform a six-minute walk test; and the risk for severe worsening of symptoms.

Then, they compared the Black participants with the white participants regarding the socioeconomic status reported by each person and federal data on neighborhood poverty levels. The researchers adjusted for several known risk factors influencing respiratory health outcomes, including smoking status and pack-years (calculated by multiplying the number of packs of cigarettes smoked per day by the number of years a person has smoked).

“We found that Black study participants fared worse than their non-Hispanic white counterparts in a number of areas, including respiratory symptoms, quality of life measures, functional status and imaging findings, as well as having higher rates of severe exacerbations,” says study lead author Chinedu Ejike, M.D., M.P.H., a postdoctoral research and clinical fellow at the Johns Hopkins University School of Medicine. “However, several but not all of these racial differences could be explained by lower socioeconomic status and living in poor neighborhoods.”

The researchers say that low individual socioeconomic status has previously been associated with higher odds of having COPD, and according to their recent study’s findings, residing in lower-income neighborhoods also has detrimental associations with respiratory morbidity. Several factors, they explain, associated with living in disadvantaged neighborhoods such as higher stress, poor access to health care, lower quality of care, lack of access to healthy food, exposure to environmental contamination, poor neighborhood walkability and diminished physical activity — may affect COPD outcomes.

“Thus, to fully understand racial disparities with COPD, one must take into consideration where people live,” says Ejike.

”Our work adds to the understanding of the complex relationship among race, socioeconomic status — both at the individual and neighborhood levels — and respiratory health outcomes,” says study co-author Han Woo, Ph.D., a biostatistician at the Johns Hopkins University School of Medicine.

Ejike and Woo hope their study will encourage health care providers to develop strategies that can break the current link between socioeconomic disadvantage and poor health outcomes.

In further research, they plan to (1) identify more risk factors leading to increased respiratory morbidity among Blacks with COPD, (2) understand why neighborhood context plays a role in COPD health and (3) examine constructs of a neighborhood, such as residential segregation, that contribute to the racial gap in COPD health.