Game-Changer: How a Simple Quest Led to a Discovery That Promises to Change Lives 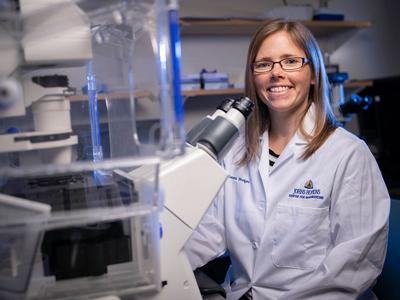 If you’re one of millions of people who rely on eyedrops to safeguard your vision from the effects of diseases such as glaucoma, you know the hassles this can entail. Many drops must be administered multiple times a day. You may have to set an alarm to make sure you don’t miss your medication, and you have to have it with you. If the medication requires refrigeration, that’s an added concern. Then there are the drops themselves. Some temporarily cause blurred vision, and many people — especially the elderly, who are the most likely to need these medications — have difficulty getting the drops into their eyes.

Laura Ensign, the Marcella E. Woll Professor of Ophthalmology at Wilmer Eye Institute, Johns Hopkins Medicine and a chemical engineer in Wilmer’s Center for Nanomedicine, says the reason eyedrops have to be administered frequently is that they’re generally inefficient when it comes to delivering drugs to the eye. “Although the eye is external — we can see the surface of it — the tears and layers of tissue make it extremely complex. It’s difficult to design a drug that can effectively get through all those layers,” Ensign says. Moreover, she explains, our eyes constantly produce tears, which drain from the eye surface into the nose via the nasolacrimal ducts. “That’s why, if you put a drop in your eye, you can sometimes taste it. And that happens almost immediately, which shows how quickly an eyedrop leaves the eye.”

We also blink on the order of 20 times a minute. It’s a reflexive movement that helps keep eyes moist, but that same moisture quickly washes away eyedrops. As a result of all these factors, Ensign says only 5% or less of the medication in a given eyedrop actually gets into the eye. “It’s as though every few seconds the surface of your eye is being wiped clean, so the amount of time a medication is actually in the eye is very short.”

About six years ago, she and colleagues from eight centers and departments across The Johns Hopkins University began work on a new formulation aimed at improving drug delivery to the anterior segment — the front of the eye. Manipulating the properties of a polymer currently used in very small quantities in some eyedrop formulations, the team created a formula that stays on the eye longer.

At room temperature, the polymer material is a liquid, but when it comes into contact with the surface of the eye, it spreads and coats the eye before undergoing a gelling transition. The drug is contained in the polymer material. “The gel is very thin, and it coats, so when you blink, it stays on the surface and holds the drug there,” explains Ensign.

Interestingly, the researchers found that the polymer material — dubbed OcuGel — also renders soluble some drugs that are insoluble in water. Cyclosporine, for example, commercially available as Restasis eyedrops, appears milky. “It’s a particle suspension,” Ensign says, “but if you take the same concentration of cyclosporine and put it in the OcuGel it will be a clear liquid, so you don’t have the blurring effect of a milky eyedrop.”

By remaining on the surface longer, and also potentially by increasing the solubility of drugs that typically do not dissolve in water, more drug can be absorbed over time. Holding the medication in a gel form on the eye also reduces drainage through the nasolacrimal ducts, so less of the drug gets into the systemic circulation — important when it comes to preventing side effects. “Systemic exposure to drugs is lower not only because you’re not getting as much that’s draining off your eye right away, but also because you’re using it less frequently,” Ensign points out.

The researchers didn’t change the drug; they merely enhanced how long the drug stays in contact with the eye and how much is readily available to be absorbed. As a result, they’ve been able to use the formulation to demonstrate improved delivery of many different drugs to the anterior segment. But along the way, their research revealed something quite unexpected — something that could have a far greater impact on the field and the lives of people with serious eye diseases.

Because it’s been challenging just getting medication into the tissues in the front of the eye, treatments for diseases that affect the back of the eye — including some of the most serious, sight-stealing conditions — have generally been limited to invasive procedures such as injections, implants and surgery. But as Ensign’s team started looking at data on the absorption and delivery of drugs for the anterior segment, they found that the intraocular drug penetration of their formula was so good that drugs targeting the anterior segment were being delivered to the choroid and the retina — the posterior segment of the eye — as well.

While the researchers are still characterizing the pathways by which that happens, they’re already applying the technology to develop drugs for diseases that affect the posterior segment. These include drugs to prevent new blood vessel growth in the back of the eye, which can occur in age-related macular degeneration, macular edema, diabetic retinopathy and retinal vein occlusion. For patients who must undergo intravitreal injections every six to eight weeks to prevent new blood vessel growth, this is truly a game-changer.

Ensign recalls a patient of Peter Campochiaro, Wilmer’s George S. and Dolores Doré Eccles Professor of Ophthalmology and Neuroscience, who shared his experience of the injections with the research team. “To even hear about the anxiety you have when you’re going for your next injection — the pain and the blurred vision and the impact that has on your day-to-day life — the thought that you could actually remove that is super exciting,” she says.

The work has opened up many areas of inquiry for therapeutic applications, including, for the first time, the neuroprotective potential of eyedrops for retinal ganglion cells (RGCs) in glaucoma. Most glaucoma drugs are aimed at reducing elevated eye pressure, which causes the RGCs to die and leads to vision loss. But RGCs can die even when eye pressure is normal, so the ability to protect them independently of intraocular pressure would have huge implications. This is a major focus of researcher Don Zack’s lab, with whom Ensign’s group is now collaborating.

Another possible area of application is for the treatment of retinitis pigmentosa (RP). Recently, Campochiaro identified a pathway involved in the death of cones in RP, for which there are currently no therapeutic options. Because more than 50 genes have been implicated in RP, the development of gene therapy is challenging, but Ensign says if you could interrupt the process that leads to cone death, it doesn’t matter what genetic mutation is causing it. In the lab, her team is now studying OcuGel as a way to deliver drugs for preserving vision in RP.

Ensign, who hopes to start a phase I clinical trial of OcuGel later this year, says that while the technology might sound elaborate, the material itself and the way it’s formulated to attain these properties is actually simple. “A lot of the innovation is in manipulating known materials and phenomena in new ways to get very different and unexpected behavior that has tremendous effect on drug absorption,” she says.

She points out that from a translational perspective, the simpler something is, the more likely it is to actually make it into patients — a fact she hopes will make the regulatory pathway relatively straightforward. “It’s not something super science-fictiony or anything like that,” Ensign says. “It’s actually quite simple in a lot of ways.”