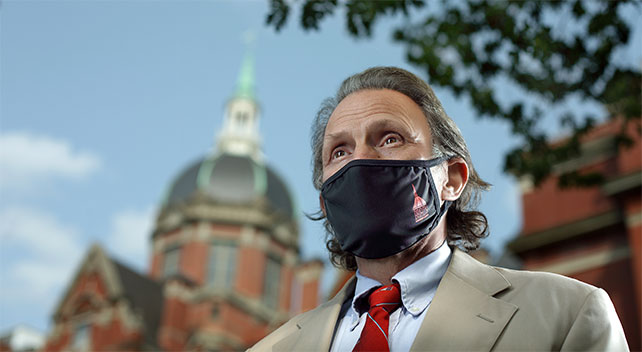 Isaacs: “In African American men, the team has found mutations in some genes that are much less well-studied.”

“In Baltimore City, five out of six men who die from prostate cancer are men of African descent,” says molecular geneticist William Isaacs, Ph.D., the William Thomas Gerrard, Mario Anthony Duhon, and Jennifer and John Chalsty Professor of Urology. “It’s like an epidemic.” This high death rate is not limited to the U.S. All over the world, men of African descent are diagnosed at a younger age with aggressive prostate cancer.

And yet, these men who are at highest risk of dying of prostate cancer are least represented in major studies, Isaacs says. “At Johns Hopkins, we have blood and tissue samples from 20,000 men who have undergone radical prostatectomy. But fewer than 10 percent are African American (AA). If you just looked at those results, you’d think this was a disease of white men.” Isaacs recently did a search for papers on clinical trials for prostate cancer, “and the average participation of African Americans was 3 percent. These men should be overrepresented, not underrepresented! They’re more likely to get prostate cancer, but are rarely included in trials that might result in better treatment and a better outcome.” Similarly, in genetic studies, “AA men are grossly underrepresented. Our lack of knowledge about the molecular drivers of lethal prostate cancer among AA men remains a major barrier to precision medicine in this population.”

Good news: “That is changing.” Isaacs and colleagues at the Brady including molecular pathologist Tamara Lotan, M.D., and immunologist Jelani Zarif, Ph.D., in partnership with Tamaro Hudson, Ph.D., and Angel Byrd, M.D., Ph.D., at Howard University, have proposed a groundbreaking project to identify factors in the genome and immune system in AA men with aggressive, locally advanced or metastatic prostate cancer. “This project is first-in-field and long overdue,” says Isaacs.

So far, in preliminary analyses of the germline data, Isaacs and colleagues have found no significant differences among races in the frequency of mutations of genes such as BRCA2 and ATM – well-known genes linked to lethal prostate cancer in Caucasian men. However, in AA men, the team has found mutations in some genes that are much less well-studied – genes including LZTR1.

“This is pretty much, hands down, the most important genetic risk marker I’ve seen for African American men.”

In this project, and also as part of an international team of scientists, Isaacs is looking at variant stretches of DNA called single-nucleotide polymorphisms, or SNPs (pronounced “snips”). SNPs are almost-but-not-quite-right bits of DNA. Isaacs, a pioneer in discovering faulty genes involved in prostate cancer, has identified and studied many SNPs.

What’s the difference between bad genes and SNPs? “Mutated genes like BRCA2 are ‘high penetrance’ genes,” Isaacs explains. “Although the mutations are rare, they have a big impact.” The opposite is true for these common genetic variants, “which typically are not even in a gene; they’re close to genes and affect the expression and the regulation of the gene. Instead of a six-fold higher risk of getting cancer, which you might have with BRCA2, you’ll have maybe a 1.1- or 10-percent increase in risk. However, there are many of these risk SNPs,” 170 discovered by the international team at last count. “You don’t look at just one SNP or two, but many of them, and then you just count,” with the cancer risk going up or down depending on how many out of the bunch of SNPs a man has. “That’s why you really need to look at them as a group.”

In 2008, Isaacs, Wake Forest scientist Jianfeng Xu, Ph.D. (now at NorthShore University Health System), and Henrik Gronberg, M.D., from Sweden, were the first to publish their discovery of five SNPs that can raise a man’s risk of prostate cancer. The risk, they found, depends on how many variants he has, and also on whether he has inherited a “risk allele,” one of a pair of DNA sequences at the same place on a chromosome that control the same characteristic (like hair color, or color blindness). “Each one of these SNPs has a risk and a non-risk allele.” In that study, Isaacs’ team showed that “if you inherit the risk allele for each one of these five SNPs, your risk is five times higher.” The risk is cumulative: the more risk SNPS and alleles, the higher your odds of getting prostate cancer. The opposite is also true: if you hit the genetic jackpot and have very few bad stretches of prostate cancer-related DNA, your lifetime risk is reassuringly low.

Isaacs was part of a 2020 study directed by Chris Haiman, Ph.D., at USC, published in European Urology, showing that men of African – but not European – descent have a particular SNP that raises the odds of getting prostate cancer more than most SNPs do. “It’s not in individuals of European ancestry, only in men of African descent,” but men who have this variant have a twofold increase in their risk of prostate cancer. “If you have a family history and you have it, your risk goes up about 28 percent, and if you have a family history of early onset cancer, diagnosed under age 60, your risk goes up as high as 40 percent. There’s no other variant or DNA mutation that can dramatically increase your risk of familial prostate cancer, and this one is quite common in men of African descent. This is pretty much, hands down, the most important genetic risk marker I’ve seen for AA men. It’s a major finding that will have implications for screening men of African descent.”