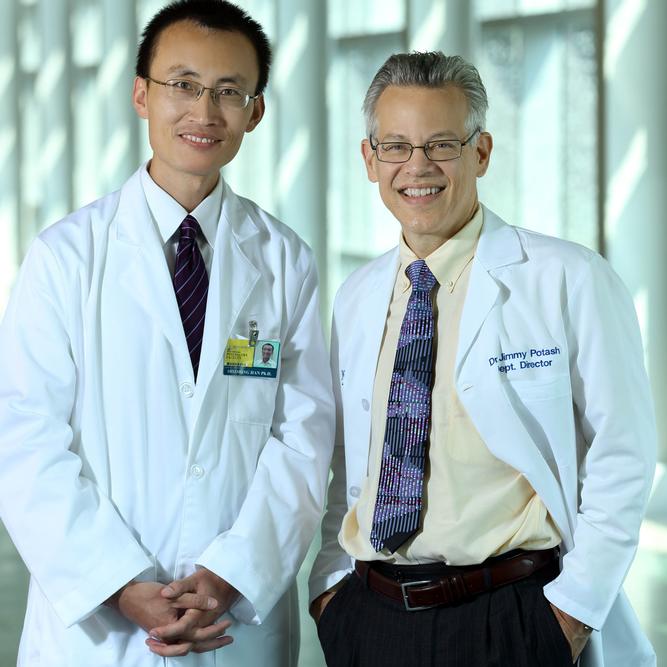 For more than a century, clinicians have tried to understand the association between depression and alcohol dependence, which co-occur in a third of individuals with either condition. In a chicken-or-egg-type conundrum, some believe alcoholism causes depression, either through direct pharmacologic effects on the brain or indirectly through negative social consequences, while others contend that depression can lead to alcoholism in individuals who use alcohol to self-medicate. Yet a third hypothesis suggests that shared genetic factors predispose some people to both disorders.

Now, new research from geneticist Shizhong Han, who joined the psychiatry faculty in August, gives credence to the third theory. His study, published online in JAMA Psychiatry, analyzed the depression polygenic risk score (PRS)—a measure of depression risk that incorporates many genetic variations across the genome—of 3,871 patients with alcohol dependence and 3,347 healthy controls who participated in four large genome-wide association studies: the Collaborative Study on the Genetics of Alcoholism; the Study of Addiction, Genetics and Environment (SAGE); the Yale-Penn genetic study of substance dependence; and the National Health and Resilience in Veterans Study (NHRVS).

In the work, an elevated PRS for major depressive disorder was found to also convey a significant increase in risk for alcohol dependence, suggesting that a shared genetic susceptibility contributes to the co-occurrence of both conditions.

This marks the first time scientists have provided evidence of this theory at the molecular genetics level on a genome-wide scale, says Han. Adds Psychiatry Director James “Jimmy” Potash, a study co-author, “The thing that’s so interesting is that we now have this powerful molecular genetic toolset that can actually give us a definitive answer after decades of people speculating or looking at tangential, indirect evidence.”

For Potash, this line of investigation has come full circle. He first researched the link between alcohol and mood disorders as a psychiatry resident here in 1996, under former director Ray DePaulo, who had just received a philanthropic donation to examine the association. Then, the first step was studying how mental health problems ran in families; Potash published a paper in the American Journal of Psychiatry demonstrating that a subset of families with bipolar disorder also tended to have high rates of alcoholism and attempted suicide.

“We now have this molecular genetic information from millions of places in the genome on many thousands of people that can help find specific areas in the genome contributing to disease or highlight a particular individual’s risk for alcoholism and depression,” Potash says. “It’s very much a molecular extension of the same thing I was interested in 20 years ago, and it very clearly demonstrates that, yes, there is a shared genetic risk for both alcohol dependence and depression.”

Next, Han says, they’d like to identify particular genes or biological pathways underlying both disorders as well as determine to what extent other substance use disorders might also share in this common susceptibility.