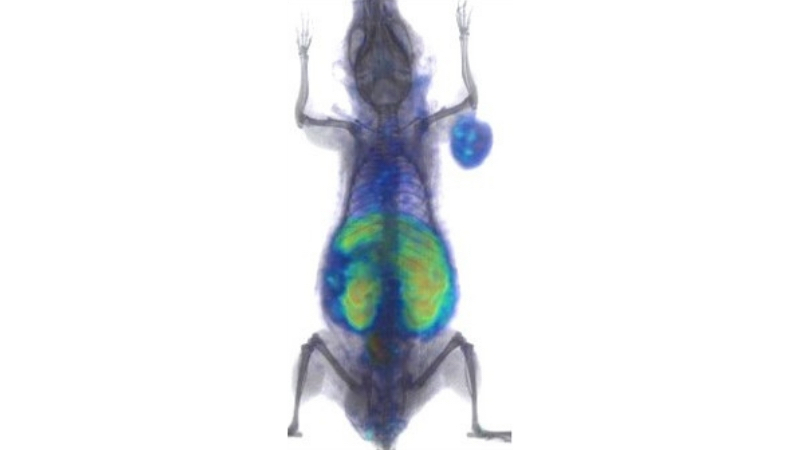 Radiolabeled protein lights up tumor implanted in the arm of a mouse under a PET scan. The researchers hope to use scans like this one to to calculate in real time how much of an immunotherapy drug reaches a tumor and what parts of a cancer remain unaffected. Credit: Sridhar Nimmagadda

Experimenting with mice, Johns Hopkins researchers report they have successfully used positron emission tomography (PET) scans to calculate in real time how much of an immunotherapy drug reaches a tumor and what parts of a cancer remain unaffected.

The technique uses PET imaging of a synthesized radiolabeled protein that locks on to tumor cells, letting researchers visually follow where a so-called checkpoint inhibitor drug binds to a tumor as it disperses. “This approach offers a vital step toward directly measuring how well immunotherapy drugs are able to engage a tumor in any given person,” says Sridhar Nimmagadda, Ph.D., associate professor of radiology and radiological science at the Johns Hopkins University School of Medicine and a member of the Sidney Kimmel Comprehensive Cancer Center. If more tests in animals and humans confirm the scan’s precision and safety, its use could streamline cancer therapy by enhancing doctors’ ability to tailor therapy, help determine the therapeutic dose of a drug, and avoid or stop treatments that are not effective, Nimmagadda says.

The study is described in the Feb. 1 issue of The Journal of Clinical Investigation.

The technology is available for license through Johns Hopkins Technology Ventures

Use of checkpoint inhibitors is a type of cancer therapy designed to help the immune system recognize cancer cells as dangerous and target them for destruction. Tumors often hijack these natural protective systems, allowing the tumors to masquerade as healthy tissues. The programmed death ligand 1 (PD-L1) is one such checkpoint target, and it is currently the backbone of immune checkpoint therapies, with three  very expensive drugs—atezolizumab, avelumab and durvalumab—now approved by the U.S. Food and Drug Administration (FDA).

However, the Johns Hopkins researchers say, their use is often a shot in the dark, because it’s difficult to predict or quickly track how much PD-L1 is expressed in different tumors and how efficiently those drugs bind to PD-L1 receptors at the tumor in patients.

The research team created a specialized radiolabeled small protein, or peptide, in the lab that binds to PD-L1, which facilitates marking the receptor with a radiotracer that can be seen with PET imaging.

Using their radiolabeled peptide, the researchers investigated whether they could follow the interaction between the drug and the PD-L1 checkpoint protein to measure how thoroughly and quickly the inhibitor drugs bound to this important target in real time.

They next sought to verify this effect in animals. The researchers treated mice that had implanted human lung tumors with a single dose of atezolizumab—a drug that fights cancer by binding to PD-L1—and waited 24 hours, allowing the checkpoint inhibitor to bind to PD-L1. They followed this treatment with the radiolabeled peptide and PET imaging.

When the mice in the experimental group receiving atezolizumab were compared to controls that received only a saline injection, the researchers found a 77 percent reduction in unoccupied PD-L1 levels in the tumor, indicating that treatment reached many of the PD-L1 proteins.

“The remaining areas indicate parts of the tumor that the immunotherapy didn’t reach,” says Nimmagadda, who is a member of the Institute for Basic Biomedical Sciences at the Johns Hopkins University School of Medicine. “In human patients, this could give us some insight about how to optimize further treatments by increasing the dose or substituting other drugs or therapies more quickly.”

The researchers then tested whether they could use their method to measure changes in PD-L1 receptor levels on a tumor.

Again using mice with human lung tumors, the researchers treated the rodents with a drug that increases PD-L1 levels in tumor cells. This treatment was followed with the radiolabeled peptide. Upon imaging these mice with PET, they found that the radiotracer levels were 65 percent higher than in control animals with normal levels of PD-L1 receptors. These studies showed that changes in PD-L1 levels could be measured without a biopsy during immune checkpoint therapy.

Additionally, in chemical structure studies of the peptide, the researchers found that peptide binding to PD-L1 is similar to each of the immunotherapy drugs the FDA has approved, suggesting that the same performance observed in their experiments would likely translate to treatments with other immune checkpoint drugs.

The researchers are working on improving the technique, and they plan to begin clinical trials this year.