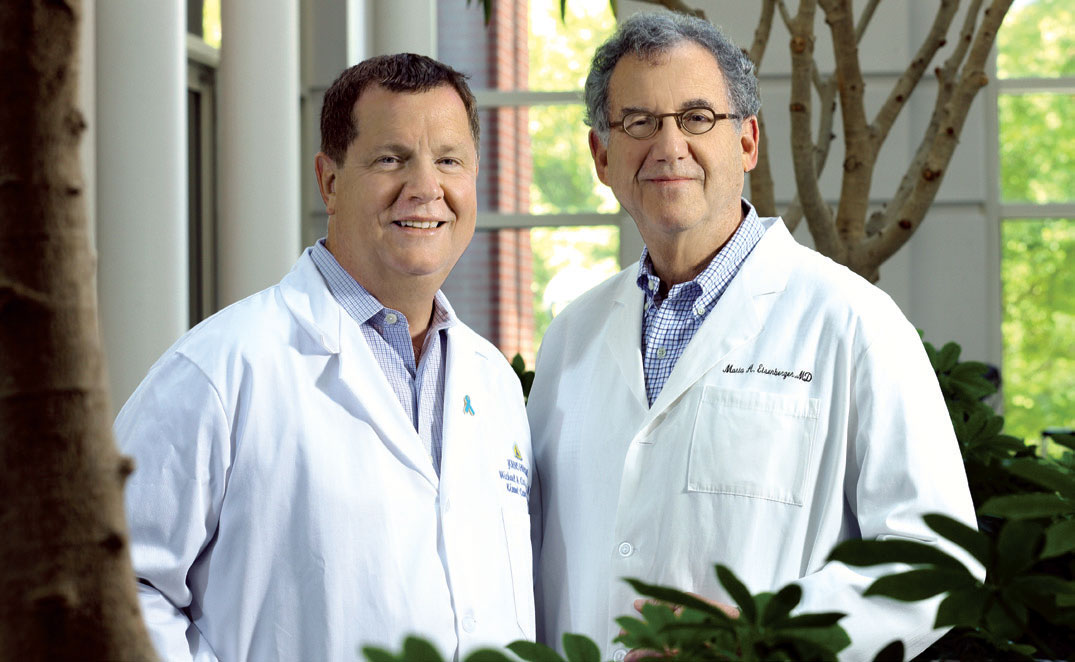 Carducci and Eisenberger: Adding another approach to standard ADT may increase survival.

If you have been diagnosed with metastatic prostate cancer and your doctor wants to start ADT (androgen deprivation therapy, which shuts off the supply of testosterone and other male hormones), ask about starting abiraterone (Zytiga), as well.

This is the message from the LATITUDE and STAMPEDE clinical trials, two major studies recently published in the New England Journal of Medicine: Giving abiraterone plus low-dose prednisone along with Lupron to “hormone-naïve” men (who are just starting ADT) increased survival significantly – by an average of 18 months, but about 25 percent of men showed an increased survival of four years, and a small percentage of those men have had no progression of cancer for even longer

Timing may be an important part of the equation. Until this study, abiraterone has been used as a second-line drug, given if ADT stops working, instead of right up front when a man starts ADT. “The evidence suggests that ADT alone may no longer be the standard treatment for men with newly diagnosed metastatic prostate cancer,” says medical oncologist Mario Eisenberger, M.D., the R. Dale Hughes Professor of Oncology and Urology.

But there’s an important caveat, immediately noted by Eisenberger and medical oncologist Michael Carducci, M.D.: “While the survival improvement with the combined ADT and abiraterone approach on these two studies is a major accomplishment, the reports suggest that the vast majority of men on both studies assigned to the ADT-only arm never received abiraterone when their disease became resistant. This raises the question on whether initial ADT plus abiraterone simultaneously is actually superior to ADT followed by abiraterone,” the current standard of care. “We hope that follow-up information can provide more clarity on this important issue.”

The survival benefit shown in these studies combining ADT and abiraterone is very similar to the benefit for men on ADT who take docetaxel (Taxotere); in fact, Eisenberger’s pioneering work on docetaxel several years ago helped that drug become the standard of care for men with castrate-resistant prostate cancer. There are far fewer side effects with abiraterone plus low-dose prednisone than there are with docetaxel. (Prednisone is necessary with abiraterone to help the adrenal gland make sufficient amounts of cortisol.) But abiraterone is very expensive. It costs $9,000 a month; however, a generic form of the drug is expected to come on the market within the next two years.

“The CHAARTED study two years ago, which added chemotherapy (docetaxel) to ADT, and the LATITUDE and STAMPEDE studies strongly support that adding another approach to standard ADT may substantially improve outcomes,” says Carducci. These findings raise many new questions, including: What’s happening in these patients on both abiraterone and ADT? Does the combination delay cancer from mutating and becoming more resistant to treatment? Could some of these men do even better with a third drug – docetaxel – added to the mix? Could new biomarkers help tell which men will respond best?

Because the world of advanced prostate cancer is changing so rapidly, with exciting and complicated advances on so many fronts, “we believe that all men with advanced or metastatic prostate cancer should seek an opinion from a medical oncologist,” says Eisenberger.