GSTP1: Could This Gene Be Linked to Cancer Death in Black Men? 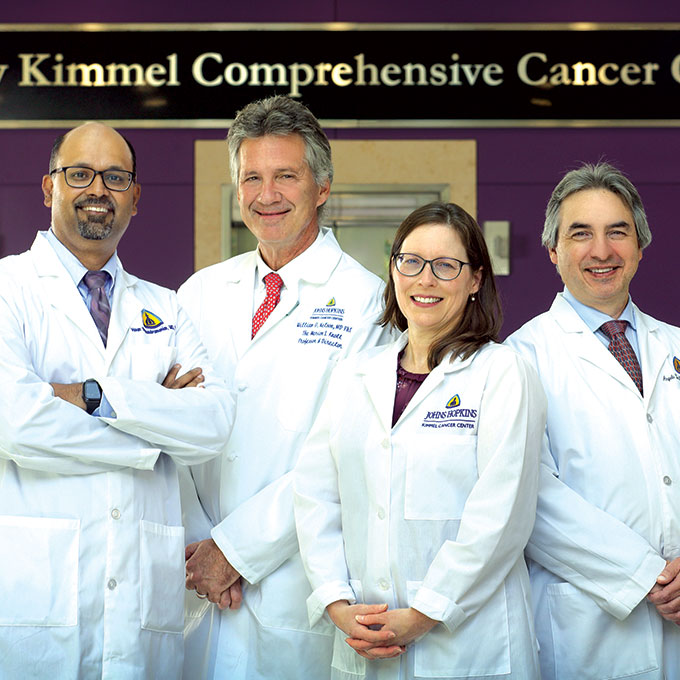 Yegnasubramanian, Nelson, Platz and De Marzo: “This observation should prompt additional studies to determine whether GSTP1-positive cases represent a distinct molecular subtype of prostate cancer and whether GSTP1 expression could provide a biological underpinning for the higher prostate cancer death rate in Black men.

Black men in the U.S. are nearly twice as likely to die of prostate cancer than white men. What accounts for this terrible statistic?

“Without question, better insights into the causes of life-threatening cancers in Black men – insights that lead to actionable interventions – are sorely needed,” says pathologist Angelo M. De Marzo, M.D., Ph.D. In recent and ongoing work, De Marzo and a team of Hopkins scientists may have found such an insight.

Along with oncologist William G. Nelson, M.D., Ph.D., Director of the Sidney Kimmel Comprehensive Cancer Center, scientist Srinivasan Yegnasubramanian, M.D., Ph.D., and epidemiologist Elizabeth Platz, Sc.D., M.P.H., De Marzo began to investigate a gene whose relationship to prostate cancer was first explored more than 20 years ago by Nelson: GSTP1 (pronounced GST “pie”). Nelson and others at Hopkins showed that GSTP1 – which normally is responsible for inactivating certain environmental toxins – was shut down in more than 90 percent of prostate cancers. Without this protector gene, Nelson found, it was easier for prostate cancer to grow and become aggressive.

Recently, a research team led by De Marzo began looking at cancer tissue in the relatively rare instances when GSTP1 is not knocked out, and what they found was startling: “Black men showed 2.5-3 times higher rates of having a GSTP1-positive cancer,” says De Marzo. Could the presence of this gene be linked to the higher risk of prostate cancer death in Black men? To help answer this question, the team has launched a deeper investigation, led by Nelson, with funding from the Department of Defense Prostate Cancer Research Program (DOD PCRP).