Harnessing the Healing Power of Music

The Zoom meetup begins with Jason Armstrong Baker playing a melody on a metal drum to welcome his class. Five people log in to the weekly, one-hour session, hosted by the Johns Hopkins Center for Music and Medicine, during which Baker teaches rhythm skills through call-and-response clapping and by listening to music with the group. 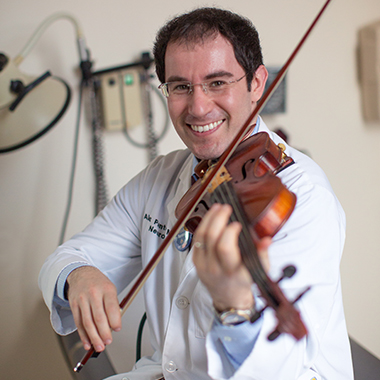 “Our research suggests that the playing of musical instruments may have positive effects on movement, emotional processing and even cognitive defects in patients with Parkinson’s disease.”— Alexander Pantelyat

Why all the clapping? The participants have Parkinson’s disease, and according to a 2015 study of 20 patients conducted by the center’s director and co-founder Alexander Pantelyat, drumming can help improve overall quality of life and mobility.

Over the course of the hour, the group will clap different rhythms as taught by the 47-year-old Baker in a call-and-response fashion, and then move on to clap over two songs chosen by participants.

“Just listening to music activates more brain regions simultaneously than any other human activity,” says Pantelyat, a neurologist. “So therein lies both the challenge and promise studying music’s effects on the brain: There is likely something for everyone when it comes to using music as medicine, but how do you separate the effects on specific brain networks if they are being activated simultaneously?”

The center, founded in 2015, operates with a dual mission: to bring music into health care through rigorous scientific investigations of how music and medicine interact, and to develop research and clinical care to treat and prevent injuries that affect professional musicians. Its other co-founder is Serap Bastepe-Gray, a faculty member at the Johns Hopkins Peabody Institute who holds a joint appointment in the Department of Neurology. Peabody partners with the center on some of its classes and research.

There is hope for musical interventions in disorders such as Parkinson’s because there are many areas of the brain that react to music:

· In the temporal lobe, areas for speech processing overlap with areas that process music.

· Songs associated with strong memories can activate the nucleus accumbens, the so-called pleasure center of the brain.

· Relaxing music can lower the production of cortisol, which lowers stress and in turn lowers elevated heart rates and blood pressure.

Pantelyat has been playing violin since the age of 7, and pursued medicine instead of becoming a professional musician. He treats patients with various movement disorders and also directs the Johns Hopkins Atypical Parkinsonism Center.

“We need to learn a lot more about how music can help rehabilitate the networks being damaged in Alzheimer’s and Parkinson’s,” he says. “That’s where my interest lies.”

Thanks to a newly published study on the impact of six weeks of group guitar lessons on people with Parkinson’s, and upcoming research papers on the effects of drumming and singing, more is now known about musical interventions for this debilitating disorder.

Published in June 2022 in the journal Parkinson’s Disease, the Guitar PD study found that “playing musical instruments may have positive effects on motor, emotional and cognitive deficits” in people with Parkinson’s. The small pilot study, which consisted of twice-weekly guitar lessons for six weeks, also found significant improvements in mood and anxiety, and showed that some improvements lasted six to 12 weeks after lessons ended. The research was conducted as a feasibility study, which assesses the practicality of a treatment plan. The feasibility was promising, with 24 out of 26 participants finishing the study.

The paper concludes that larger studies are warranted to further explore guitar instruction as an intervention.

“We know that active music-making within a group setting provides a music-enriched environment that encourages simultaneous physical, social and emotional engagement, lending a therapeutic advantage by stimulating multiple complementary processes in the brain,” Bastepe-Gray, the study’s lead author, says. “Guitar PD is the first study we know that utilizes nontraditional fingerstyle guitar instruction as a music-based intervention in PD.”

As a direct result of that study, Peabody, whose faculty ran the guitar groups and partnered with the Johns Hopkins University School of Medicine on the study, now subsidizes group and individual guitar lessons, known as the PD Strummers Circle and Performance Ensemble, for people with Parkinson’s disease.

“The guitar, which is portable, affordable and one of the most popular instruments in the U.S., has potential as a motivational therapeutic tool both in the clinical and community settings,” adds Bastepe-Gray.

The soon-to-be-published studies include the ParkinSonics — a 30-week trial that examined the effects of singing in a weekly chorus on the voice, mood, memory and quality of life for people with Parkinson’s. One major finding is that participants saw significant improvements in their minimal voice volumes as a result of singing in a chorus.

“This is a big deal for patients with Parkinson’s disease,” Pantelyat explains. “As the disease advances, communication can be impaired by the voice getting lower and becoming more monotonous.”

Like the PD Strummers, the ParkinSonics kept going after the study, and have been meeting weekly on Zoom throughout the COVID-19 pandemic.

Another feasibility study, a group drumming study for people with Parkinson’s and Huntington’s diseases and their care partners, is being prepared for publication.

Studies such as these capture how the center hopes to develop and employ evidence-based interventions involving rhythm and music for a range of conditions, including Alzheimer’s disease, stroke, epilepsy and autism, as well as for Parkinson’s.

“Our research suggests that the playing of musical instruments may have positive effects on movement, emotional processing and even cognitive defects in patients with Parkinson’s disease,” Pantelyat says.

His center is chipping away at the science that supports this. For example, in Parkinson’s, the processing of rhythm is disturbed, as are the connections between frontal lobe networks and the basal ganglia (deep centers of the brain) responsible for the coordination of walking and other movements. Tremors that many people experience worsen when they aren’t using their hands or when they’re experiencing high levels of stress, so music’s reduction of cortisol levels may play a role in decreasing them. Much like in patients who experienced strokes and undergo rehabilitation, weakened brain pathways may be strengthened, new pathways may form to go around faulty pathways, or both, when musical interventions are used.

Serap Bastepe-Gray, co-founder of the Center for Music and Medicine, says the guitar has potential to be a therapeutic tool in community and clinical settings.

Johns Hopkins is far from alone in researching the therapeutic effects of music.

The Sound Health Network, a partnership of the National Endowment of the Arts with the University of California San Francisco, which was awarded $20 million over five years in 2019 by the National Institutes of Health, also supports research and promotes public awareness of the impact of music on health and wellness. Its website lists projects at dozens of universities that range from studying the challenges of appreciating music after cochlear implantation to researching whether music-based strategies can reduce caregiver stress levels in at-risk families in Appalachia.

International touring company the Mark Morris Dance Group started Dance for PD classes over 20 years ago. The research-backed classes are available in 300 communities in 25 countries.

Pantelyat hopes to help support a Dance for PD class in Baltimore that has been inactive during the pandemic. He also hopes the ParkinSonics can soon return to in-person classes. The center is supporting an in-person drumming class that Baker will lead at the Govans Presbyterian Church in Baltimore starting this fall.

Pantelyat says the NIH funding reflects the vision for the next five years in music and medicine, and that large, well-designed clinical trials across multiple centers are needed to definitively find whether particular music and rhythm-based interventions have effects and what the effects are. He hopes that eventually directing someone to a weekly choir or drumming class could have the same effect as a medication he would prescribe.

“This is what the field clearly needs — a better understanding of the mechanisms of how rhythm and music impact the brain and body in general,” he says. “We need to understand more profoundly the effects of music and rhythm in order to optimize our treatments. There are still a lot of unanswered questions.”