October 18, 2022
A study from Johns Hopkins researchers shows eating a Mediterranean-style diet lowers the risk of preeclampsia by at least 20%, according to an observational study using the Boston Birth Cohort.

Cardio-obstetric researchers at Johns Hopkins’ schools of medicine and public health recently showed that eating a Mediterranean-style diet lowers the risk of preeclampsia by at least 20%, according to an observational study using the Boston Birth Cohort. The study’s results, published in the Journal of the American Heart Association earlier this year, show that the diet is effective across all races of the women who participated, but especially among Black women, who represent 47% of the people in the cohort and whose incidence of preeclampsia is twice that of white women nationally.

“Cardio-obstetrics is a new and growing field, so a crucial part of our work is to guide best practices through research studies like this one,” says Anum Minhas, lead author of the study and one of the principal leaders in the development of the cardio-obstetrics program and fellowship at Johns Hopkins in 2019. 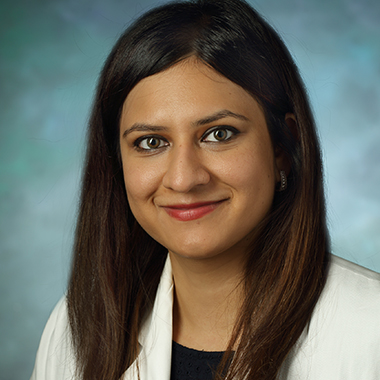 “Cardio-obstetrics is a new and growing field, so a crucial part of our work is to guide best practices through research studies like this one.” - Anum Minhas

The current study was conducted by surveying 8,507 women enrolled in the Boston Birth Cohort. Participants were given a diet score based on self-reported frequencies of consuming Mediterranean-style food during their pregnancies. These diet scores were then correlated with the incidence of preeclampsia, after being adjusted for several relevant factors. Compared with those in the lowest group, women in the middle and highest groups were 22% to 28% less likely to develop preeclampsia. Black women who scored in the highest diet group had a 26% reduced risk of preeclampsia compared with those who scored in the lowest.

A previous study, led by Director of Johns Hopkins Cardio-Obstetrics Garima Sharma, compared the incidence of preeclampsia in U.S. with that of foreign-born Black women, and showed that race alone cannot explain the disparities seen in the United States. “This latest research adds evidence to the idea that the racial disparities we see are due in part to socioeconomic factors, not just genetic or biological ones,” says Minhas, an assistant professor of medicine, who cares for patients at the Johns Hopkins Women’s Cardiovascular Health Center.

In addition to healthy eating, Minhas recommends that pregnant women with cardiac disease be seen by a dedicated multidisciplinary team to achieve better outcomes for mother and child, and she advises the same for those at high risk of developing a heart condition. “Patients benefit from the different perspectives we bring,” she says, referring to members of the cardio-obstetrics team — which includes Sharma as well as Director of Labor and Delivery Jason Vaught, and Director of Adult Congenital Heart Disease Ari Cedars. “We have ongoing clinical trials in biomarker identification and coronary imaging, which we hope will add more tools to our efforts to reduce cardiovascular risk in women with pregnancy complications.”

Learn about the Johns Hopkins Heart and Vascular Institute.