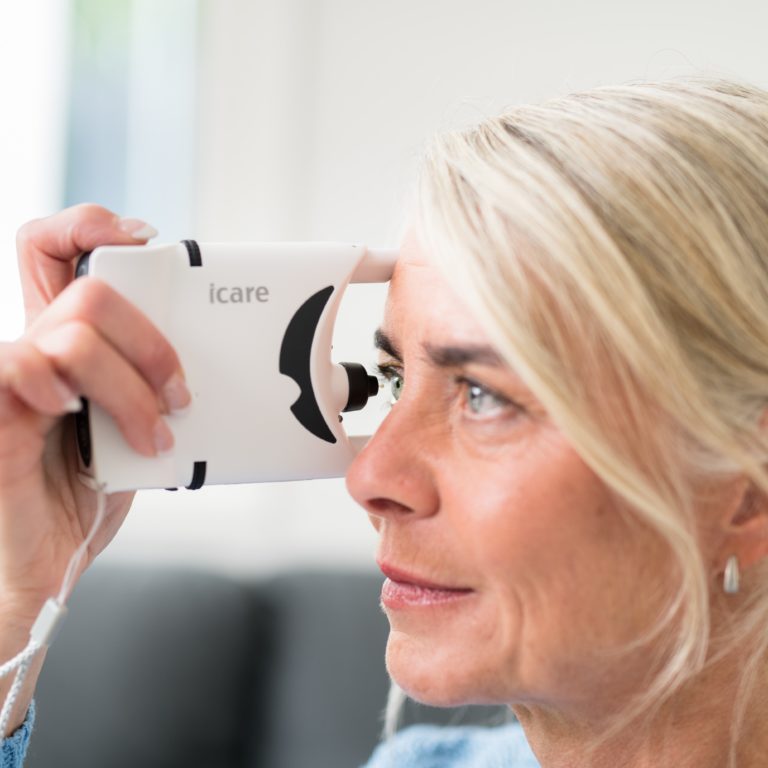 In the U.S., an estimated 3 million people have the optic nerve disease known as glaucoma, a number that is expected to grow with the aging of the population. While there is no cure, careful monitoring can prevent vision loss.

According to Thomas V. Johnson, a glaucoma specialist at the Wilmer Eye Institute, the gold standard tonometer is the Goldmann applanation tonometer. A patient having their eye pressure measured with this device goes to the clinic or doctor’s office and is administered an eye drop containing both an anesthetic and a yellow dye. The patient puts their head in a slit lamp – that’s the frame-like thing you put your forehead against while resting your chin on the little platform – and the doctor or technician moves the device, which has a bright blue light on it, in front of your eye.

“It comes very close to the eye, and in fact touches the eye and flattens the cornea, but people can’t feel it because of the anesthetic,” explains Johnson. “The machine is calibrated so that whoever is using it can turn a dial while looking through the microscope and figure out exactly how much force is needed to flatten the cornea, which then tells you the intraocular pressure.” This method, of course, requires a highly skilled person and a slit lamp with an applanation tonometer.

There are also a variety of handheld devices that are used to measure eye pressure, some of which also require an anesthetic drop in the eye, and none of which are as accurate as the Goldmann applanation tonometer. Then there’s the iCare rebound tonometer.

The size of a travel coffee mug, the iCare features a tiny, disposable probe attached to a very thin copper wire, at the tip of which is a little white plastic ball. When the doctor or technician puts the probe in the device and pushes a button, the device shoots the probe out several millimeters, and the little ball taps the patient’s cornea and then retracts back into the device. The machine measures the speed of the probe as it exits and as it returns, and the higher the pressure, the harder the eye will be and the faster the probe will recoil off of the eye.

Johnson compares the concept to bouncing a deflated basketball off a wall. “It’ll bounce a little bit, not very hard. But if you pump it up so it’s under really high pressure and really hard and you bounce it off a wall, it’ll bounce really hard back at you,” he says. Because the probe is so lightweight and so fast, the patient doesn’t really feel it, so it doesn’t require an anesthetic eye drop to use. And, says Johnson, the iCare has been calibrated and extensively studied, so we know it’s very accurate.

The first iteration of the iCare was used in ophthalmologists’ offices by trained staff, but in the last couple of years a more compact version was developed that has light guidance on the front of it so patients can use it on themselves. “A patient holds it up to their own eye, and the machine will tell them if they’re close enough, and little green and red lights guide the patient so they can get it aligned in front of their eye. Then they hit the button, and the probe taps the cornea six times and tells the pressure,” says Johnson.

Being able to measure eye pressure at home can be beneficial for patients for whom going to the doctor is a burden – for example, those who can’t drive themselves, or who have physical limitations. And of course, during the coronavirus pandemic, there are a lot of people who don’t want to come to the clinic or doctor’s office to get their pressure checked. But there’s another good reason for being able to check one’s pressure at home.

If someone has glaucoma, or is suspected of developing glaucoma, and their condition is stable – meaning they’ve been seen multiple times in clinic and their eye pressure has been in a safe range and their visual field test and optic nerve scan findings are stable – then they’ll typically be seen once every six to twelve months to have their pressure measured.

That sounds simple enough, except for the fact that eye pressure varies – sometimes quite dramatically. “Pressure is highest typically in the morning, when you’re just waking up, and lowest in the afternoon,” says Johnson. “So if you have a 4:00 pm. appointment at the doctor’s office, that particular pressure may be the lowest pressure you’ll have that day.”

Whenever you’re measuring pressure, then, you’re only getting a snapshot of what is a very dynamic process. For that reason, measuring eye pressure more frequently – including at different times during the day – could provide a much better picture of the overall intraocular pressure.

Johnson and his colleague Elyse McGlumphy, an assistant professor of ophthalmology at Wilmer, are studying whether home tonometry may also be useful in assessing eye pressure in a subset of patients who present with normal pressure in clinic, yet have deteriorating visual fields. To better understand intraocular pressure variation and the role for home IOP monitoring, the pair has begun using the iCare to more closely monitor such patients to see if it can provide a more accurate assessment of pressure throughout the day. “We just looked at the results for almost 50 patients over the last two years, and in one-third of cases, found that they actually did have high pressure outside of the office – pressure that was high enough that it required more aggressive treatment,” says Johnson.

McGlumphy, whose research interests include behavioral influences on pressure, says the pair is now looking to do a large prospective study of patients who are getting worse in terms of testing but who have had low pressure in the clinic. “We want to see what is going on at home in those patients that may be contributing to this worsening,” says McGlumphy. “Then the next step would be to explore how we can intervene to blunt that. Say they have a really high pressure in the morning. What of our therapies can we use to intervene so they stop getting worse?”

With their research, Johnson and McGlumphy hope to determine how accurately the results from home tonometry predict the risk of glaucoma worsening, as well as which patients would be likely to benefit from using it. “In the course of seeing 100 glaucoma patients a week, we may be able to identify 15 percent that really should get this test, so we’re going to give it to them. And of that 15 percent, we’re going to identify maybe five that have very high pressures at 10 o’clock at night. For those patients, we’re going to recommend more aggressive treatment,” Johnson says – treatment that just may save their eyesight.