Could HOXB13 be a target for treatment to slow the growth of advanced prostate cancer? 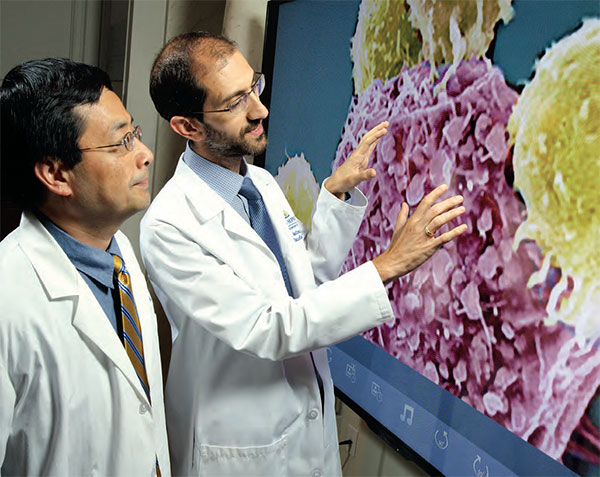 Encouraging work by Luo, left, and Antonarakis on AR-V7 and aggressive, advanced prostate cancer is leading to new strategies — and new potential targets — for treatment.

Could HOXB13 be a target for treatment to slow the growth of advanced prostate cancer? Much more work is needed to understand exactly how these two miscreant molecules interact, Luo adds. “Nevertheless, preclinical work presented in the study showed that silencing HOXB13 significantly decreases CRPC tumor growth by suppressing AR-V7 function. These early results clearly identify HOXB13 as a pivotal upstream regulator of AR-V7–driven prostate cancer.”We thought AR-V7 and HOXB13 were bad enough on their own. Now, as two separate trails of exciting research have converged, Brady scientists have discovered that these molecules work together as a diabolical duo to drive castration-resistant prostate cancer (CRPC). This finding provides important new insight on how CRPC works, and may suggest new targets for treatment.

AR-V7, an aberrant androgen receptor that develops in advanced prostate cancer, was discovered by Jun Luo, Ph.D., Professor of Urology, in a seminal study published in 2009. Now, AR-V7 can be detected in a blood test, developed by Luo, which can help guide treatment decisions in men with CRPC.

HOXB13, a mutated gene that greatly raises a man’s risk of getting prostate cancer, was discovered in 2012 by William Isaacs, Ph.D., the William Thomas Gerrard, Mario Anthony Duhon and Jennifer and John Chalsty Professor of Urology, and colleagues in a seminal study published in the New England Journal of Medicine.

Separately, each of these mutations means trouble. But in a new study, led by Luo and published in Proceedings of the National Academy of Sciences, he and Isaacs unexpectedly discovered that AR-V7 and HOXB13 “were, in fact, partners in crime that, together, cause prostate cancer to progress,” says Luo.

In this new study, investigators from Hopkins and Duke University found that the HOXB13 protein is “universally required for AR-V7 binding to DNA, a process thought to drive castration resistance in prostate cancer,” Luo explains. The team discovered direct physical interaction between HOXB13 and AR-V7 – and this suggests a new target for treating CRPC: “Currently, there is no drug that can target AR-V7, but targeting HOXB13 may prove to be more feasible.”