“I Believe in This Place!” An interview with the Brady’s new Director, renowned surgeon-scientist Mohamad E. Allaf, M.D.

Last year, Discovery reported that Alan Partin, M.D., Ph.D., was stepping down as Director of the Brady after 17 years, and that a national search was under way for his successor, who would become the Brady’s fifth director. In addition to Partin, previous Directors have been Hugh Hampton Young, William Wallace Scott, and Patrick C. Walsh.

Wonderful news! The best candidate for this big job turned out to be one of our own, and he is a familiar face to readers of Discovery: Mohamad “Mo” E. Allaf, M.D., previously Director of Minimally Invasive and Robotic Urologic Surgery.

You may know that Allaf is nationally renowned as a gifted surgeon and thoughtful scientist. What you may not know is the story of how he came to the Brady, a story that goes back 32 years.

Allaf’s family is Lebanese, but because of a civil war that tore apart the country, they moved to Kuwait to make a better life for their family. “Neither of my parents was college-educated,” says Allaf. “My sister was accepted into Bryn Mawr College,” in Pennsylvania. “My parents supported her in this. We all came with her,” to get her settled in the U.S., and the plan was to fly back to Kuwait in a few days. “We flew out at 1:15 in the morning on August 2, 1990,” Allaf says, “and then Iraq invaded Kuwait around two in the morning. We were on the last flight out.” Unable to go back to Kuwait, and unable to return to Lebanon, “we made the decision to stay here.”

It was not easy. Allaf was 16, and his world had changed radically overnight. He enrolled as a junior at Lower Merion High School, in a suburb of Philadelphia (he just missed basketball legend Kobe Bryant, who graduated from Lower Merion five years later). When Allaf graduated, “Johns Hopkins University took a chance on me.”

He came to Hopkins to study biomedical engineering. “While I was in a course as an undergraduate, I met Dr. Walsh, and became inspired,” not only by the field of Urology, but by the field’s early embracing of technology. Urologist Louis Kavoussi (now Chair of Urology at Northwell Health in New York) was an early pioneer in minimally invasive approaches to urologic surgery. “He became a mentor, in addition to Dr. Walsh. I did research with them as an undergraduate, then was admitted to medical school at Johns Hopkins – how can you turn that down? – and then was accepted to residency at the Brady.”

Alan Partin became Allaf’s mentor in academic leadership, providing the best of both worlds: “Patrick Walsh was my surgical mentor. I modeled my surgical approach on his meticulous dissection and excellence in outcomes. Alan really mentored me from an administrative, executive leadership standpoint: dealing with people kindly and gently but still moving things forward. Their combined vision has helped me craft my own thoughts on the future of the field. It is not lost on me that there are big shoes to fill and a legacy of excellence to continue and advance.”

SOME OF THE BRADY’S MOST IMPORTANT INITIATIVES INCLUDE:

“Led by William Isaacs, it’s one of a kind. Many men with prostate cancer have fathers, uncles, brothers, and sons who also have the disease. Understanding the underpinnings of HPC started with Drs. Walsh and Isaacs, and thanks to our donors, it’s been an amazing group effort to get to where we are now. We’ve built the infrastructure required to unlock those questions, and we need to double down and use our data in different ways.” How? Keep reading!

“We are emerging into the era of big data and data analytics – combining our unique biorepository of tissue and urine from thousands of men with prostate cancer with machine learning and artificial intelligence,” to make sense of millions of pieces of information. Here’s an example: Say you are a 62-yearold Hispanic man with a PSA of 3.1, no family history of prostate cancer. You have Gleason 4+3 cancer in 3 of 12 biopsy cores and 70 percent Gleason pattern 4, with one nodule seen on MRI, a PI-RADS of 3, and a PSA density of 0.16. What is your likelihood of having PSA recurrence in five years? How successful has treatment been in other men with cancer like yours? Big data can answer these questions.

“The Partin tables were an early version of this; they looked at three things – Gleason score, PSA, and clinical stage – to predict whether cancer would be localized to the prostate. Today, all of the genomic data we have – no human can look at all of that and unlock it. Similarly, in clinical care, our MRIs and radiologic data are packed with quantitative information. Being able to integrate it through computers will allow us to make better decisions with more certainty for our patients. This is an important pillar for our patients moving forward – not just in prostate cancer, but in bladder cancer, kidney cancer, and other urologic diseases.” This is precision medicine. Johns Hopkins has 16 Precision Medicine Centers of Excellence (PMCOEs), and two of them are in Urology: one in prostate cancer, and one in bladder cancer. “In Urology, there are a lot of questions and uncertainty where decisions have to be made, and if we could use data to personalize those decisions for the patient in front of us, we would all be in a better place.” 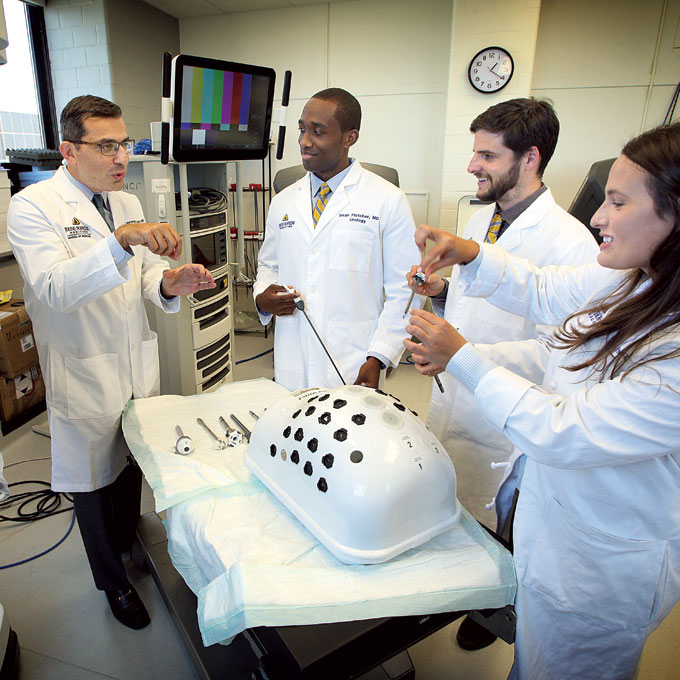 Allaf: “I want to do what Johns Hopkins did for me: Give me someone who’s smart, hardworking, and I will help that person succeed. I believe in this place!”

How do you train doctors in today’s era of so much information? One new tool: a surgical version of flight simulation. “The Halsted method,” pioneered by Johns Hopkins’ first Professor of Surgery, William Halsted, “was ‘see one, do one, teach one.’ See an operation, do an operation, and teach the operation. But now we need to evolve, so it’s not just an apprenticeship, but medical students starting early, doing robotic surgery using augmented reality, or even 3-D printed models.” Now, using 3-D printing technology, it is possible to make a model of someone’s actual organ, “and then create that organ using novel hydrogels,” using red dye in artificial blood vessels and “pressurizing it, so it behaves just like an artery would behave.” Allaf envisions having residents train on such models. “Just like in flight simulation: by the time they get to the OR, they are seasoned, having ‘flown’ many hours.”

The Brady is fortunate to have had one of the first URobotics Labs in the world, headed by Dan Stoianovici, Ph.D. “Dan can help develop this augmented reality, using computer vision during surgery.” What is computer vision? Consider the smart phone, Allaf says. “If the iPhone can recognize what you look like, why can’t a robot machine recognize things during surgery that will aid me in a better surgery? For example, say there’s a small blood vessel that appears on the screen as I am doing robotic surgery. And the computer knows, based on the last thousand surgeries, that this has the potential to bleed two days later – it has the appearance of a complication in the making. Using data analytics and computer vision, we can prevent this future problem in real time.”

Or, why not add a cancer-targeting tracer to the mix during surgery? What if there is a chance that cancer has moved past the prostate but is still curable with surgery? “We are doing a clinical trial right now using an injectable tracer, based on PSMA, that we can see during surgery.”

Johns Hopkins Medicine has expanded beyond Baltimore to Howard County, Suburban Hospital in Bethesda, and Sibley Memorial Hospital in Washington, D.C. The Brady has a very special relationship with Wellspan Health in York, Pa., and is now the exclusive provider of urologic care at their flagship hospital. We are able to provide access to Brady-level care through these points of access; in particular, at York and Sibley, we are growing our footprint in clinical care, offering research and clinical trials.”

What about places further away, “beyond the brick-and-mortar facilities?” Telemedicine! “A new infrastructure bill, signed earlier this year, will provide broadband internet to a big swath of the country that doesn’t have it. We are working to get our faculty licensed in some of these states.” This means that people who live in largely rural areas where medical care is sparse can have a consultation or get a second opinion in their own homes with a Brady urologist. Then, if they need treatment, they can make just one trip to a Hopkins facility. For example, say a man in Kansas, recently diagnosed with prostate cancer, would like to see Allaf: “I would review the biopsy, PSA, MRI, and all the information in a telemedicine appointment. Then the next time we see each other could be the day of surgery: he could make one very efficient trip.

Five out of six men in Baltimore who die from prostate cancer are of African descent. The Schaufeld Program is funding research that examines biological and societal factors that may help us understand why Black men get prostate cancer more frequently, have more aggressive cancer, and have poorer outcomes. Through this program, we are working with the community to spread the word about screening and health literacy in Baltimore City. This is also a pipeline program with trainees who come from under-represented backgrounds. With this experience and training, they have a better chance of getting into medical school to become the scientists, and perhaps urologists, of tomorrow. We are very proud of this effort, and would like to expand it through investment. Right now, it is funded for five years. We are always thinking about the community we serve and how we as a Urology department can help influence better outcomes.

There’s so much we could talk about: entire areas of Urology that aren’t routinely covered in Discovery,” which is focused on urologic cancer. What else, then, should readers of Discovery know about the Brady’s new Director? That he believes in the Brady, and he loves it. “We are a department that provides excellent, compassionate, cutting-edge care. Dr. Walsh’s legacy lives on. I was trained by Dr. Walsh. He instilled in me that caring for patients starts with caring about the patients. I see my life dedicated to the Institute, just like his. Johns Hopkins is home for me. I’ve been here since I was 18 years old – since 1992. I grew up here. My wife, Kendall, is a faculty member at Johns Hopkins. We met at Hopkins. Our first son was a preemie who spent a couple months here in the NICU. I owe Hopkins a debt of gratitude: I want to do what Johns Hopkins did for me. Give me someone who’s smart, hardworking, and I will help that person succeed. I believe I owe the next generation of medical students and residents. I believe in this place.”