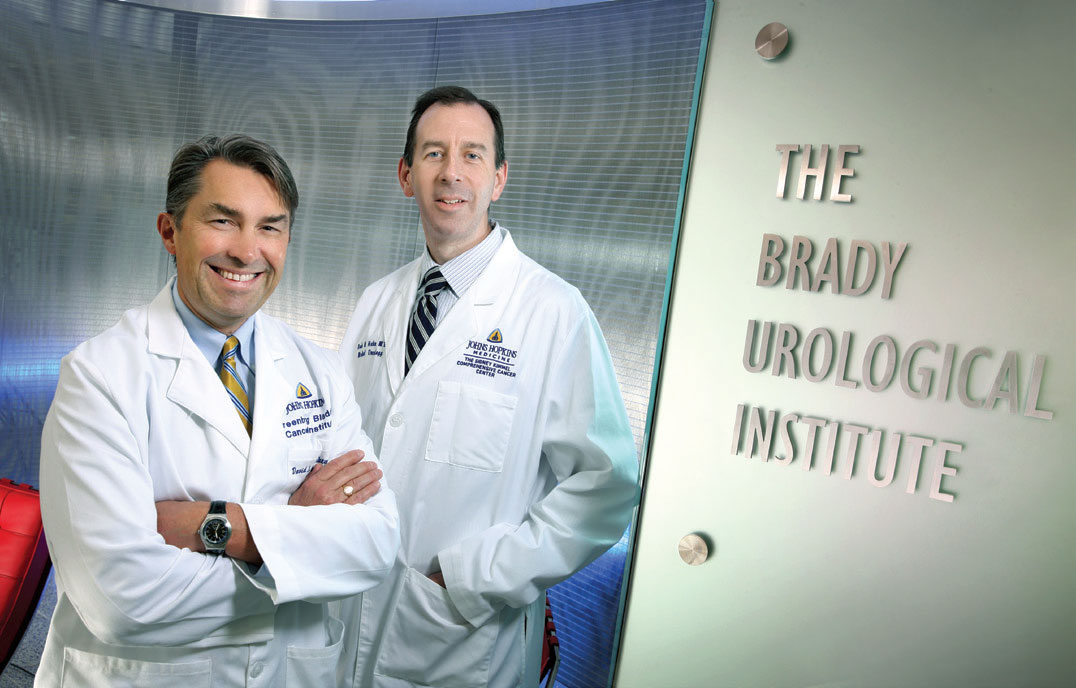 Results from a Brady-led study, just published in JAMA Oncology, offer new hope to people with advanced bladder cancer. The results of this international phase 1 clinical study were so promising, in fact, that they prompted the FDA to approve the drug, called durvalumab.

Durvalumab is a “checkpoint inhibitor.” Checkpoints are tiny molecules that affect T cells, the immune system’s mighty soldiers. These checkpoints act as blindfolds that prevent the T cells from recognizing and attacking cancer cells. Checkpoint inhibitors are a new class of immunotherapy drugs that remove the blindfold and unleash the T cells. As we’ve discussed elsewhere in Discovery, immunotherapy doesn’t help everyone with advanced cancer – but when it works, it can achieve spectacular results.

There are several different checkpoints. One of them is called PD -1, and it binds to a second molecule, called PD-L1, to make sure the T cell is well and truly restrained – handcuffs to go along with the blindfold.

“Our goal was to establish the clinical benefit of durvalumab as a second-line therapy for locally advanced or metastatic urothelial carcinoma,” the most common type of bladder cancer, says Noah Hahn, M.D., director of the Brady’s Medical Oncology Bladder Cancer Program and the study’s senior author.

But the study didn’t just show the drug was safe; it significantly shrank the tumors in some patients – particularly, in those with high PD-L1-expressing tumors. In other words, these patients just happened to have the right target for this particular drug. Other drugs that attack different checkpoints are under development; each may help a different subset of patients. “This is precision medicine,” says Hahn. Instead of a cookie-cutter approach, where all patients get chemotherapy and some of them are helped, “our goal is to get the right drug to the right patients, in whom it has a very high chance of success.”

There were 191 patients from nine countries in the study. Most were men, and the average age was 67. All but one had undergone previous chemotherapy with platinum drugs, without success. The objective response rate – the proportion of patients whose cancer shrank with the drug – was 18 percent among all patients, and 28 percent in those patients with the high PD -L1- expressing tumors.

But the news is even more exciting: “Among the subset of patients who responded to therapy, 77 percent had an ongoing response at the time the data was analyzed,” says Hahn. Side effects were rare, and only 2 percent had to discontinue treatment. “The average overall survival of more than 18 months among all patients represents the longest overall survival result among PD-1- or PD-L1-targeting immunotherapies tested so far in metastatic bladder cancer patients,” says Hahn. Based on these encouraging initial results, durvalumab received FDA approval in May 2017.

“Results of this and other PD -1/PD-L1 immunotherapy studies have solidified immunotherapy as a standard of care for advanced bladder cancer patients,” says Hahn. Building on this success, Hahn and other Hopkins investigators are leading studies examining the potential benefit of PD-1/PD-L1 immunotherapies given much earlier: as neoadjuvant therapy before surgery in muscle-invasive bladder cancer patients, and given in combination with radiation or intravesical BCG in patients with BCG-relapsing non-muscle invasive bladder cancer.