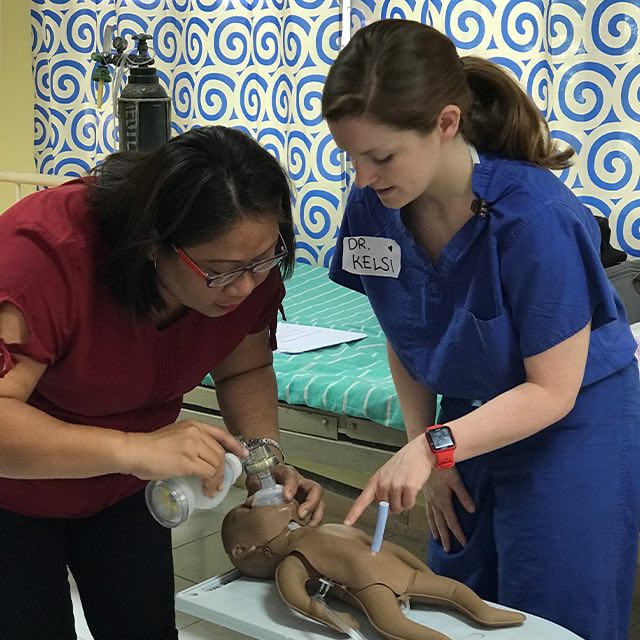 Pediatric resident Kelsey Stayer uses a mannequin to teach a Filipino midwife in Mati, Davao Oriental, how to ventilate a newborn infant.

Nicole Shilkofski, director of the pediatric residency program, is no stranger to Southeast Asia. Since 2007, Shilkofski has volunteered for over 30 surgical missions to the Philippines, among other countries, through Opera­tion Smile, and she lived in Malaysia for four years helping Johns Hopkins estab­lish a medical campus in Kuala Lumpur.

More recently, through her connec­tions in the Philippines, she has been using education as a means to improve neonatal and maternal mortality rates in the country’s southern Mindanao re­gion—where they are among the highest in Southeast Asia. Working with obstet­ric and pediatric partners, including Johns Hopkins gynecologist/obstetri­cian Jill Edwardson, Shilkofski has been training groups of midwives and com­munity-level providers in the Helping Babies Breathe and Helping Mothers Survive programs. These global initia­tives—supported by the American Acad­emy of Pediatrics, the American College of Obstetricians and Gynecologists, and Jhpiego, a nonprofit health organization affiliated with The Johns Hopkins Uni­versity—use hands-on simulation exer­cises with mannequins to demonstrate to health care workers how to prevent birth asphyxia and postpartum hemorrhage in newborns and delivering mothers.

“These programs have been taught in many other countries, but this is the first time they have been part of an integrated platform for these health workers,” says Shilkofski. “The goal is to regionalize some of this training, and disseminate it through a train-the-trainer cascade model.” Program materials are left with students so they can teach colleagues.

With support from a Fulbright grant from the U.S. Department of Educa­tion, Shilkofski brought six residents and two medical students on a training trip in the Mindanao region last summer as part of a global health elective. Residents spent two weeks leading training courses for workers, then observing the trainees repeat the information back and men­toring them as they taught the lessons to other health care workers. Residents also spent a week in Manila shadowing resi­dents and intensive care unit fellows at Philippine Children’s Medical Center.

“It was a fantastic experience,” says pediatric and anesthesiology resident Keri Koszela—especially the days when she and her colleagues watched the train­ees train their colleagues. “It was so ex­citing to see them take this knowledge and teach it on to others, adding their knowledge of local systems.”

Pediatric resident Sam Gottlieb notes that the program appealed to him be­cause of its sustainability: “Instead of doing a clinic, bringing medications and leaving the next week, we were essen­tially teaching the basics of neonatal re­suscitation and management of postpartum hemorrhage to midwives, birth attendants and people on the front lines taking care of women and new­borns at birth. The idea that you are starting a cascade of education that is going to continue far beyond your time in country is really exciting.”