Incorporating Immunotherapy into the Standard of Care 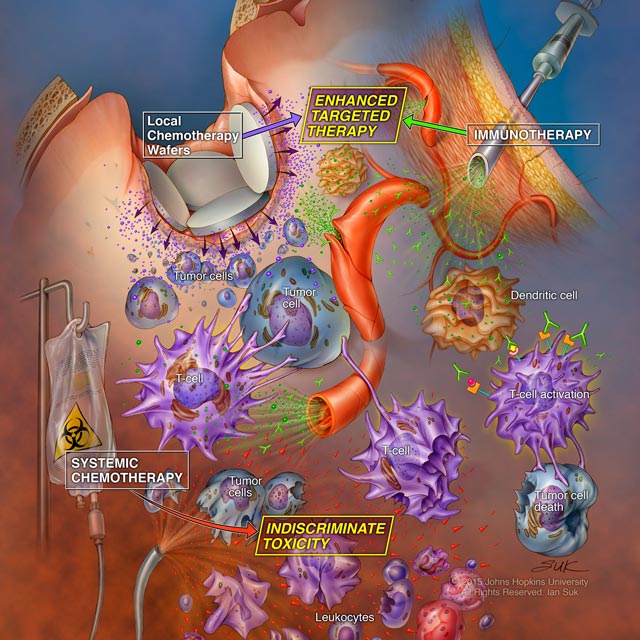 Illustration of the concept of optimizing chemotherapy in the setting of immunotherapy: while systemic chemotherapy shows an indiscriminate toxicity towards cancer cells and the immune system, local chemotherapy enhances immunotherapy by destructing the tumor microenvironment and attracting activated immune cells towards the tumor area.
Illustration courtesy of Ian Suk, professor, Departments of Neurosurgery and Art as Applied to Medicine

A new study in animal models by Johns Hopkins researchers suggests that systemic chemotherapy appears to weaken the immune system so profoundly that immunotherapy can’t work to its fullest potential in fighting cancer. On the other hand, local chemotherapy appears to act in concert with immunotherapy, giving the best chance for long-term survival. The findings, published Dec. 21, 2016, in Science Translational Medicine, could change the course of cancer care.

The study focuses on checkpoint inhibitors, a class of immunotherapy drugs approved since 2014 for treating a variety of cancers, including advanced melanoma, head and neck, lung, kidney, Hodgkin lymphoma and bladder. Prognosis has historically been poor for many of these diseases, but the new drugs have provided long-term survival for up to 30 percent of patients in clinical trials.

“These drugs aren’t experimental treatments anymore. They’re FDA-approved treatments that work for certain types of cancers,” says Michael Lim, associate professor of neurosurgery and director of the Brain Tumor Immunotherapy Program at The Johns Hopkins Hospital and the Bloomberg~Kimmel Institute for Cancer Immunotherapy. “Where these compounds fall into our current algorithm of treatments is the next big question.”

Currently, Lim says, checkpoint inhibitors are offered when cancers continue to progress after patients receive the standard of care, including one or more chemotherapies. However, a notorious side effect of most chemotherapy drugs is marked damage to the immune system—a consequence that could significantly compromise an effective immune antitumor response.

One potential way around this conundrum is to administer chemotherapy locally rather than systemically, which could help preserve immune function.

To test whether checkpoint inhibitors work better in combination with systemic or local chemotherapy, Lim’s research team administered the immunotherapy drug anti-PD-1 to a murine model of glioblastoma. They then dosed the animals with either systemic carmustine—a common chemotherapy for glioblastoma in human patients—three times weekly or implanted polymer wafers infused with the same drug locally at the tumor site.

Variations on these experiments—administering chemotherapy before immunotherapy or using temozolomide, another chemotherapy agent commonly used to treat glioblastoma—showed the same trends. The researchers are currently investigating whether this phenomenon holds true for other chemotherapy drugs and other types of cancer. They are also planning a clinical trial to help determine the most effective way to incorporate checkpoint inhibitors into current treatments.

“Right now, the standard of care includes chemotherapy and radiation, which are both immunosuppressive. We may need to reconsider our strategy if we want to effectively incorporate immunotherapy,” says Lim. “It’s an exciting time, but we have a lot of work ahead of us.”

Our leading role in the design and completion of multicenter clinical trials allows us to apply the most promising discoveries from the laboratory to patient care in an effective and expeditious fashion. At present, our most exciting areas of research include immunotherapy of brain tumors, adult stem cells and local delivery of a variety of new drug treatment options for brain tumors.

For newly diagnosed glioblastoma multiforme (GBM), we offer the following two studies. Patients are directed to one of these two studies based on their methylation status, which needs to be done on study.

NCT02766699: A phase I study to evaluate the safety, tolerability and immunogenicity of EGFR (Vectibix sequence)-targeted EDVs containing doxorubicin (EGFR(V)-EDV-Dox) in subjects with recurrent GBM