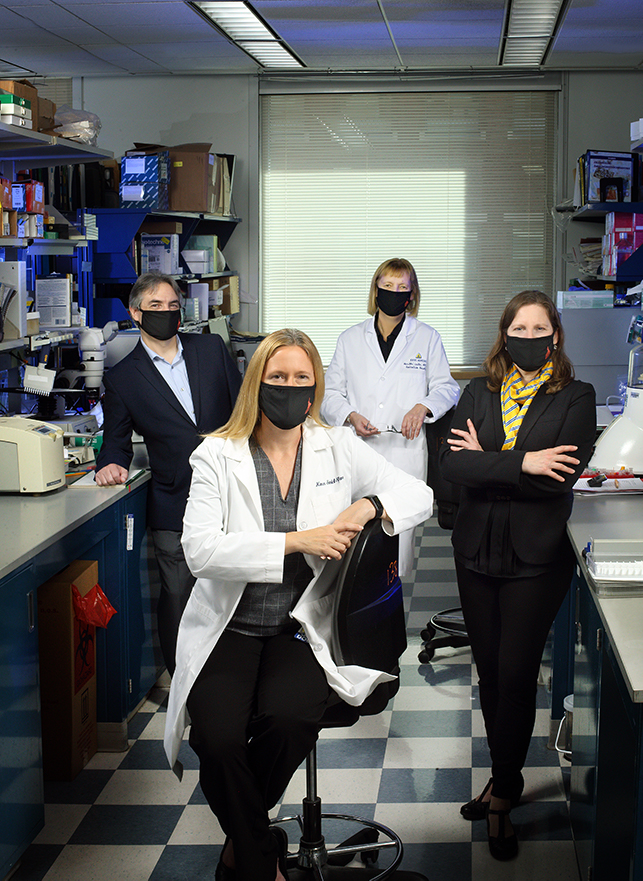 Because of the unique molecular tools used in this study, Sfanos, De Marzo and colleagues were able to catch the formation of these invasive cancers in real time.

The bacterial culprit found in this study belongs to the family Enterobacteriaceae, which includes E. coli. Better known as a nasty gastrointestinal bug, E. coli causes inflammation in the urinary tract and is a known cause of bacterial prostatitis.

As the scientists discovered, colibactin, a genotoxin produced by some strains of E. coli, can also instigate a series of unfortunate events in the prostate. Bacterial infection leads to acute and chronic inflammation, which can lead to the development of a lesion in the prostate called proliferative inflammatory atrophy (PIA), first described by De Marzo, William (Bill) Nelson, M.D., Ph.D., and other Brady scientists; it can also cause DNA damage. The presence of colibactin is even more ominous, because it can directly lead to double-stranded DNA breakage.

Sfanos suspects that this combination leads, in turn, to another development: fusion of two genes, TMPRSS2 and ERG, that normally should remain separate, but in this case get abnormally spliced together. This TMPRSS2/ERG fusion – found in as many as half of all prostate cancers – is thought to be an early event leading to the development of prostate cancer.

“We found evidence in human tissues (from prostatectomy specimens) that bacterial infections are initiating the TMPRSS2/ERG fusion,” says Sfanos. “We don’t think this is the only way bacterial infections contribute to cause prostate cancer. But in this particular study, the way we looked at it was by tracking the presence of these TMPRSS2/ERG fusions.”

It is entirely possible, notes De Marzo, “that other types of mutations or events could also be caused by bacterial infections or inflammation. But looking at these fusions gave us ‘smoking gun’ evidence that bacterial infection was the initiating event.” Sfanos adds that “the colibactinproducing bacteria, TMPRSS2/ERG fusions, PIA, and tiny buds of cancer were all there, in the same place at the same time, a snapshot of prostate cancer being born.” The team’s early findings are published online in BioRxiv, a scientific data-sharing website, and a manuscript for publication is under review.

Bacterial infection is a known cause of other cancers. H. pylori, for example, is a well-established cause of stomach cancer. “We believe that many different types of microorganisms, certain types of sexually transmitted infections (STIs), and other infections in the prostate can certainly cause the same chain of events,” says Sfanos.

How did the bacteria get into the prostate? They could have come from the urethra.“These bacteria are good crawlers,” Sfanossays. De Marzo recalls what Don Coffey,Ph.D., the great and longtime director ofThe Brady’s scientific labs, used to say:“The urethra is like the Holland Tunnelfor bacteria.”

Note: These tiny cancers are not the cancers that were biopsied and that led to the diagnosis of prostate cancer; they’re too young even to achieve a Gleason grade. They’re just new sites of cancer cropping up, in addition to the more mature cancer that was already there. Prostate cancer is multifocal: in most men with prostate cancer, several sites of cancer develop. But because of the unique molecular tools used in this study – looking for TMPRSS2/ERG fusions and “ERG-positive PIA”– Sfanos, De Marzo and colleagues were able to catch the formation of these invasive cancers in real time. “This might start to explain the multifocal nature of prostate cancer,” says Sfanos. “There might be multiple infections or other inflammatory events that occur throughout a man’s lifetime.”

Sfanos suspects that the men whose tissue was used for this study “likely all had undiagnosed infections.” These findings may lead to development of a new test, using urine or prostatic fluid, to look for colibactin or markers of inflammation in the prostate. Future studies may look at urine samples along with prostate tissue for such markers, and new imaging technology may one day be able to detect inflammation, as well.

For more than 20 years, De Marzo and Sfanos, with Brady scientists Bill Nelson, Srinivasan Yegnasubramanin, M.D. Ph.D., Elizabeth Platz, Sc.D., and William Isaacs, Ph.D., have studied inflammation as a risk factor for prostate cancer, particularly looking at PIA. Sfanos “has also been the major champion of infection” as a risk factor, De Marzo says. Now, these two paths of investigation have come together.

Could dietary changes make a difference? “Bill Nelson showed years ago that loss of expression of the GSTP1 gene rendered prostate cells more susceptible to DNA damage caused by a chemical compound that is found in charred meat,” says De Marzo. “Infection plus a bad diet might make this worse, and then combine that with the underlying genetics. There might be multiple culprits, a constellation of things over years.”

If inflammation can lead to prostate cancer, could anti-inflammatory agents help protect against it?

Epidemiologist Elizabeth Platz, Sc.D., has been intrigued by this possibility for many years. She is senior author of a new study on the use of aspirin and statins, published in Cancer Prevention Research. The study, of men in the placebo arm of the Prostate Cancer Prevention Trial, doesn’t answer this question once and for all – but adds more weight to the idea that, for lowering the risk of developing potentially fatal prostate cancer, fighting inflammation is a good thing.

Evidence from observational studies has suggested that when taken regularly over time, aspirin or nonsteroidal anti-inflammatory drugs (NSAIDs, including acetaminophen and ibuprofen) may lower the risk of prostate cancer. These drugs block enzymes that play a key role in the body’s inflammatory response. Other studies have linked long-term use of statins, prescription drugs that are used to lower cholesterol but that also are anti-inflammatory, to a lower risk of advanced and metastatic prostate cancer.

“Of 357 men, 61 percent reported aspirin use, and 32 percent reported statin use,” Platz continues. “Aspirin users were more likely to have low FoxP3, a T regulatory cell marker, and statin users were more likely to have a low CD68, a macrophage marker.” “Our results suggest these medications may alter the immune environment of the prostate. A next step is to determine whether these immune alterations may underlie the epidemiologic observations that taking an aspirin or statin may protect against getting advanced prostate cancer, and dying from it.”

Prostate cancer gravitates to its own kind of junk food – the cellular version of deep-fried Oreos with a side of chili cheese fries. Scientist Marikki Laiho, M.D., Ph.D., director of the Division of Molecular Radiation Sciences, and colleagues have figured out how the body enables prostate cancer’s terrible diet, in research funded by the Patrick C. Walsh Prostate Cancer Research Fund. Her basic science work may explain why anti-inflammatory drugs might help protect against prostate cancer.

The culprit is a lipid-regulating protein called CAVIN1, the scientists reported in the journal, Molecular Cancer Research. In lab studies, when CAVIN1 was removed from cells in and around the prostate tumor, the fatty acid that was in those cells spilled into the tumor’s microenvironment. The effect on prostate cancer cells was dramatic: the cancer cells soaked up the lipids, which then acted as turbo fuel to make the cancer spread more aggressively.

“In every prostate cancer cell line we tested,” says research fellow Jin-Yih Low, Ph.D., the study’s first author, “tumor cells universally had an appetite for the lipids, using them to strengthen the protective membrane around the cell, synthesize proteins and make testosterone to support and fuel the cancer’s growth. The tumor cells then behaved more aggressively, exhibiting invasive and metastatic behavior. Just having access to the lipids gave the tumor cells more power; the tumor’s behavior changed.”

But wait! There’s more: nearby cells changed, too. Deprived of their lipids, normal stromal cells started to churn out inflammatory molecules, adding fuel of their own to the fire.

Laiho’s team then confirmed their findings in mouse models, comparing tumors with and without CAVIN1 in the stromal cells. In the mice, Laiho says, “although the presence or absence of CAVIN1 did not affect the speed of tumor growth, lack of CAVIN1 definitely caused the cancer to spread. All of the mice with tumors that lacked CAVIN1 had a twofold to fivefold increase in metastasis. The tumors also had a fortyfold to hundredfold increase in lipids and inflammatory cells.”

The investigators were surprised at these results, Laiho adds. “We suspected CAVIN1 was important, but we didn’t realize how important. The tumor’s microenvironment matters, and the amount of lipids matters a lot.” Just changing the level of lipids “created a situation of rampant metastasis.”