Before Johns Hopkins established its Multidisciplinary Diabetic Foot and Wound Clinic, says director and vascular surgeon Christopher Abularrage, patients with diabetes and complex foot or wound care needs weren’t making the appointments they needed with specialists, including endocrinologists and podiatrists.

“They might have seen me but didn’t get to the endocrinologist,” says Abularrage, “so once we got their foot healed, they would come back with the same problem because their blood sugar was out of control.” Getting to appointments required major effort for these patients, many of whom were already scheduled for dialysis three times a week or relied on others for transportation. 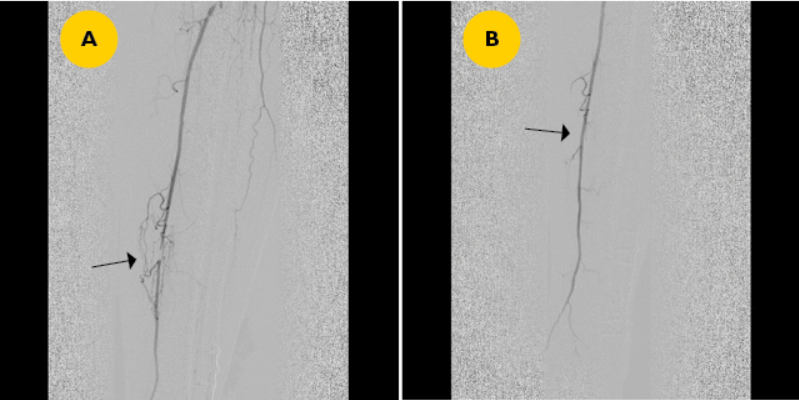 The clinic recently celebrated its fifth anniversary; within that time, it has expanded from a service offered one half day every other week to one full day a week, with vascular surgeons, surgical podiatrists, and endocrinologists available to see about 40 patients in one stop. The clinic, which also features physician assistants and a wound care nurse, manages patients with issues such as peripheral arterial disease, foot ulcers or foot infections. If surgery is needed, the team includes an orthopaedic and plastic surgeon, physical therapists, and orthotics and prosthetics specialists.

Building on the Johns Hopkins Medicine model, the office also boasts a robust research database. The first time patients arrive, a clinic staff member enters basic information about their medical history, comorbidities and any previous surgeries. Patients are then tracked over time.

“What we recently found is that, stage for stage, in the types of wounds and the types of ischemia and infections patients have, our amputation rates are some of the lowest in the country, especially for stage IV wounds requiring major amputation,” Abularrage says. In the U.S., he adds, about 20 percent to 64 percent of stage IV wounds require major amputation; at Johns Hopkins, it’s around 7 percent. The work was published in the Journal of Vascular Surgery.

Rates of recurrent ulcers have also dropped — 60 percent of new wounds that occur after patients have been seen initially are less serious, resulting in fewer surgeries and lower health care costs. Overall, Abularrage says, multidisciplinary care has equalized treatment outcomes for patients regardless of socioeconomic status, whereas in many settings, patients who are disadvantaged have much worse outcomes.

SHORING UP TREATMENT OF AORTIC ANEURYSMS AND THORACIC OUTLET SYNDROME

Endovascular repair of aortic aneurysms is ready to take another leap forward, says James Black, chief of the Division of Vascular Surgery and Endovascular Therapy. Johns Hopkins is one of seven centers in the country approved by the U.S. Food and Drug Administration and Medicare to offer branched stents for minimally invasive aneurysm repair in the spring of 2018. The devices, which are guided to the damaged portion of the aorta through a catheter, have additional arms that preserve blood flow through major branch arteries to the limbs, spinal cord and other areas of the body. They will provide an additional minimally invasive option along with fenestrated stents, which contain small windows and can be used for aneurysms located above the kidney arteries.

“This will be a real gain for patients who are currently having to run the gauntlet on complex open surgeries, particularly when they’re older,” Black says.

In other advances, vascular surgeons Ying-Wei Lum and Margaret Arnold have been drawing more patients from out of state for their expertise with thoracic outlet syndrome (TOS), demonstrating good results from rib removal and finding nonsurgical approaches for management of TOS, including Botox injections to the shoulder girdle muscles. Mahmoud Malas has managed many protocols for clinical trials in peripheral arterial disease and carotid arterial disease.

“Vascular surgery continues to integrate with specialties that can help improve quality and length of life for patients with peripheral disease, arterial disease and strokes,” Black says. Also on the table: making sure vascular surgeons are available at all five Johns Hopkins hospitals so patients can stay closer to home for treatment.

Mark Norwich, a high school football player, was told he couldn’t play football until the cause of a recurring blood clot in his arm was diagnosed and treated. Once it was identified as thoracic outlet syndrome, the Norwich family made the decision to travel from New York City to Baltimore to see vascular surgeon Ying Wei Lum, M.D., at The Johns Hopkins Hospital after researching physicians. With the goal of playing college football, Mark wanted to make sure he could recover and return to his workout and practice regimen as quickly as possible. Mark and his family tell the story of his surgical treatment, rehabilitation and recovery from thoracic outlet syndrome.